There’s no doubt that when big weather events happen, people pay attention. With announcements of feature releases and new offers at Canadian and US online brokerages happening at a greater frequency and intensity, it appears as if a significant storm of activity is brewing into the tail end of 2018.

In this edition of the roundup we take a look at some very big moves being telegraphed by one of Canada’s largest online brokerages and what that means for all the players on the online brokerage field heading into 2019. Next, we review the latest Canadian online brokerage rankings from a popular rating agency and unpack a surprising turn of events in the industry this past year. As always, we’ll close out the roundup with a healthy dose of tweets and forum posts from Canadian DIY investors.

This past week, one of Canada’s largest online brokerages, TD Direct Investing, announced that they are planning to launch some bold digital initiatives in 2019.  In doing so, TD’s online brokerage arm has doled out a healthy dose of market moving news that is bound to get the attention of DIY investors and competitors across the online trading spectrum. In a space where most of the moves are incremental, TD Direct Investing’s latest announcement feels more like a step change in the industry rather than just another small step forward.

In a week peppered with interesting stories and developments about discount brokerages, there are a number of reasons why TD Direct Investing’s announcement, which was published on September 12th, was exceptionally interesting and relevant to the online brokerage space in Canada.

The first and undeniably the most important was what the news release said.

The content of the release laid out a vision for the digital wealth management experience that TD Direct Investing clients can expect to see unfold in 2019. Included in that digital experience is the mention of digital wealth planning tools in the early part of the year as well as TD’s own robo-advisor platform that will also include TD’s own ETFs which is set to launch in the latter portion of next year.

While we don’t want to gloss over the enormity of what it means to the online brokerage space in Canada to have robo-advice hit this kind of scale, there are so many angles to this move that for this roundup, we’ll focus on some of the important details that are also worth mentioning.  As this story continues to unfold, we’ll be exploring more of what the details of the services will include, especially what a “complete, end-to-end digital investing experience” refers to.

Aside from the release of new features, another very important angle to the news release this week is that TD Direct Investing is announcing what their intentions are for some very ambitious projects. The story here is that like most other online brokerages, TD Direct Investing has historically played their cards very close to their vest. That they would not only announce multiple technology features but also put even a general timeline on those features going live signals their confidence in those programs hitting the launch windows and it signals that TD might be taking a different approach on sharing what’s in the TDDI workshop.

As technology companies are well aware of, a little bit of prelaunch buzz is what gets people curious and excited to see what actually rolls out. Historically, however, services or features in development at Canada’s discount brokerages tended not to get much of a spotlight, let alone a news release and a coordinated social media publication. So, it is clear that something has shifted with regards to ‘sharing’ information relating to development of new features.

On that note, it was particularly interesting to see a senior executive at BMO Wealth Management ‘like’ a post made by the President of TD Direct Investing (Paul Clark) about the launch of these new services on LinkedIn.

Perhaps this move by TD Direct Investing is signaling a shift in identity from being a “financial services” firm towards more of a technology firm, thus fitting more naturally into a ‘fintech’ way of operating.

A third important implication of this news release is the fact that the technology stack TD Direct Investing is choosing to integrate into their own technology stack appears to be future-proofing to some degree.

The technology provider TD Direct Investing announced they’d be working with, Hydrogen Technology Corporation, a platform that enables APIs to be developed as well as blockchain connectivity/support and uses AI/machine learning to garner insights on client behaviour. That very potent combination of technologies means TD Direct Investing can learn more about their clients’ financial services needs and, with the breadth of services under the TD umbrella, find a way to connect the right product to the right people at the right time – at least that appears to be the plan.

For clients, it means a feature-rich platform with analytics and a user experience suited for younger investors who are particular about the look, feel and function of technology platforms.

Of course, then there’s the option in the future to readily connect to blockchain-powered financial instruments, something that might come to market sooner than anyone can really predict. As such, TD Direct Investing appears to have an edge in equipping themselves with a technology layer geared towards ensuring they can connect to the technologies of tomorrow with the WebBroker interface.

Aside from the abovementioned key points, there are still numerous implications and interesting angles to this announcement.

According to an article published in the Globe and Mail this week, TD has invested $125 million into its WebBroker trading platform in preparation for new trading features and capabilities. By comparison, the acquisition of the entirety of BBS Securities (including subsidiary Virtual Brokers) last year by CI Financial (coincidentally another client of Hydrogen Technology Corp) cost about $38 million. Simply put, smaller online brokerages or those without deep technology budgets or talented tech teams are up against a formidable competitor in TD Direct Investing.

Prudently, TD Direct Investing has mentioned that these changes will take place in phases and, since approximate timetables have been given, there is enough slack and wiggle room to accommodate the surprise delays that inevitably accompany any technology project. Even so, there is little doubt that this move by TD Direct Investing, regardless of what the final products looks or functions like, will have competitors scrambling to mobilize and DIY investors (clients especially) eager to take TD Direct Investing’s new digital platforms for a test drive.

While the Investor Satisfaction study provides a snapshot in the current year of how the field of online brokerages compare to one another, we’ve been tracking results from this survey data since 2013 and as such, this year’s results present a very interesting picture both in terms of 2018 as well as how 2018 compares to previous years.

Included in this year’s rankings are 8 of Canada’s most popular online brokerages:

The big story for the 2018 online brokerage rankings from J.D. Power is the relative underperformance of Canada’s online brokerages compared to previous years. In fact, this year’s average score of 723 is the lowest since we’ve measured, beating out 2013’s score of 724 and clearly snaps an uptrend that was in place since 2015.

To unpack why that might be the case, there are also some additional observations worth noting.

Digging a little deeper into the numbers, the standard deviation of those scores, a measure of how variable those scores have been over that time period, reveals that BMO InvestorLine is actually one of the most consistent firms in terms of investor satisfaction scores with a standard deviation of 13 points. TD Direct Investing, who was ranked second last in 2018, was also tied with BMO InvestorLine in terms of volatility of investor satisfaction scores over that same timeframe. The firm with the highest variation in satisfaction scores over the same period was Qtrade Investor (28 points) because of their strong uptick in 2017 followed by Desjardins Online Brokerage (24 points).

As such, even though BMO InvestorLine’s investor satisfaction scores decreased compared to last year, they were, on a relative basis, higher than their peers in 2018. Finishing behind BMO InvestorLine this year were CIBC Investor’s Edge and Desjardins Online Brokerage. And, at the other end of the list, Scotia iTRADE finished last in terms of investor satisfaction with a score of 717.

Another interesting trend with regards to the performance of online brokerages in terms of investor satisfaction is that the range between the highest and lowest scores continues to narrow. In 2013 and 2014, for example, the range between the top and bottom scores was 64 points however in 2018 that range has compressed to just 22 points. 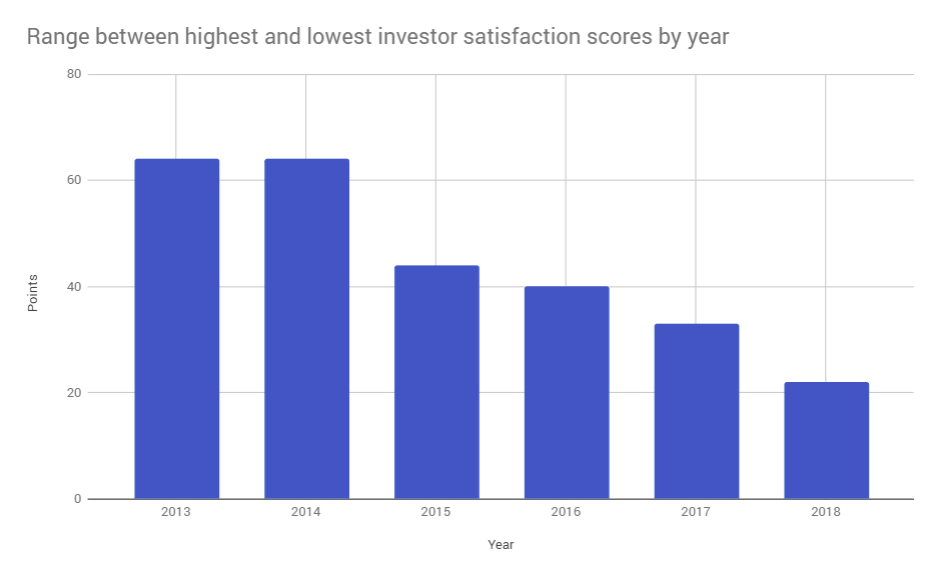 To BMO InvestorLine’s credit, their consistency has paid off. With relatively strong investor satisfaction scores in the past, in a year when the competition stumbled, and investor satisfaction waned, their current mix of services still holds currency with their clients. At least for 2018, slow and steady has won the race.

With so many online brokerages out there these days, it can be tricky to keep up with who offers which feature and who doesn’t. In the end, getting a user from A to B reliably appears to be the driving force. This forum thread from reddit’s Personal Finance Canada section highlighted the mobile experiences between CIBC Investor’s Edge and TD Direct Investing. See what interesting feedback others had to offer.

From robo-advisors, to couch potatoes to plain old mutual funds, choices for ‘passive’ investing are easier than ever, which, ironically might make choosing more challenging. One young investor looking to grow their TFSA asked about these options in this post in reddit’s Personal Finance Canada forum. The questions were met with a wealth of knowledge and advice on navigating student loan repayments, interest fees as well as useful information on robo-advisors and ETF fees. Worth a read.

That’s a wrap on another wild week inside and outside of the markets. Optimistically, there’s lots to look forward to heading into the weekend, including news that there will be the first ever Space tourist and, of course, that NFL football is back. Wherever your adventures boldly take you, we hope you have a great weekend.