Fall is officially here but for investors, leaves are green and weed stocks are doing quite the opposite of falling. Ironically, the lead up to legalization of recreational marijuana is also having a ripple effect in the online brokerage space. Once again, the fervor of investing in a hot story is causing all kinds of excitement and mayhem for online investors. Of course, big stories start out as small ones, and in the case of online brokerages north and south of the border, there are some very interesting stories brewing that could create a very different kind of story around legalities of online trading activities.

In this dark and stormy night edition of the roundup, we take an appropriately themed X-Files approach to piecing together a number of interesting signals from the US marketplace that hint of some unusual forces at work in the online investing space. Closer to home, we’ll look at the controversial wave of lawsuits hitting online brokerages for real fees charged for phantom advice. Finally, we’ll round out the week with some rather unhappy tweets and interesting forum questions from DIY investors.

Whether it’s NAFTA, President Trump or any number of other headlines coming out of the US, there’s no denying the influence that the US is having on Canadian news recently. For DIY investors, however, the US is an especially interesting space to watch when it comes to online brokerages and what the real cost is to commission-free trading.

Although this story is a tad convoluted, one of the important starting points that has emerged over the past two weeks has been related to order routing, specifically within the context of ‘fair play’ for retail investors.

While order routing and trade execution may seem esoteric to many investors content with just hitting buy and sell, the vast machinery of order execution that became the plot to Flash Boys is much more important than most retail investors know.

Depending on who you talk to, the presence of high frequency traders in the market could be a story about investors not getting the best price when executing a trade or about ensuring markets are liquid and bid/ask spreads are as narrow as possible. Over the past two weeks, however, we’ve noted several ‘blips’ in what has been a quiet story, which could be laying the groundwork for something more substantial to surface in the not too distant future. What does all that mean exactly?

Consider that last week, one of the most popular (especially with active traders) publicly traded online brokerages in the US, Interactive Brokers, decided to pull up stakes on where it was listed.

Interactive Brokers officially announced that, as of October 5th, they will no longer be listed on Nasdaq but have instead chosen to be the first to list on the two-year-old stock exchange, IEX. If the name doesn’t ring a bell (pun intended) they are best known as the trading exchange that was founded in 2012 by Brad Katsuyama, and profiled in the 2014 book Flash Boys. 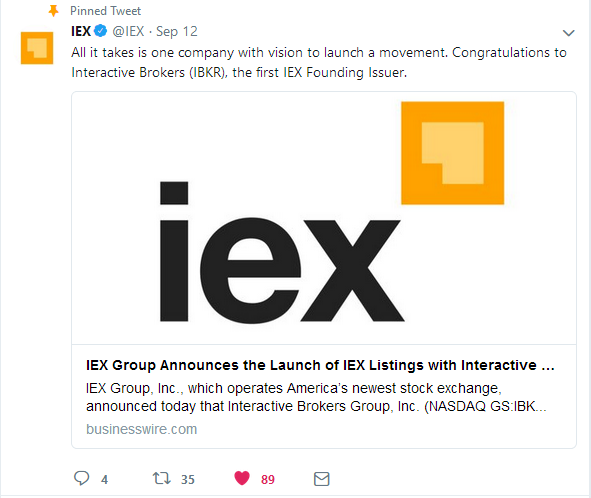 Ordinarily, a company choosing to change where it’s listing resides is not particularly noteworthy. In this case, however, Interactive Brokers choosing to list on IEX is potentially relevant for online brokerages for a number of reasons.

That last point is particularly relevant in maneuvering around competitors like Robinhood, and now, JP Morgan, who are offering retail investors zero commission stock trading. Recently Robinhood telegraphed to the markets that they are contemplating a run at going public. In doing so, the level of disclosure about how and where they make their money has been put under greater scrutiny, and, as it turns out, they have some explaining to do when it comes to client order flow.

The specific issue about Robinhood was recently laid out in detail in an interesting Seeking Alpha article that described how Robinhood has been selling client order flow to high-frequency trading firms and doing so at a much higher price than others who do so. All of a sudden the altruistic and democratizing notion of ‘free trading’ that Robinhood espouses comes back down to the physics of their business and the reality that they have to figure out how to make money (not from commissions).

While peers of Interactive Brokers in the US benefit handsomely from the revenue generated from selling order flow, there is something that doesn’t feel entirely right about online brokerages directing trading volumes to exchanges based on payment for order flow. The lingering question is whether or not a routed order is getting the “best price” and anyone who’s read Flash Boys will know, the answer is probably not. 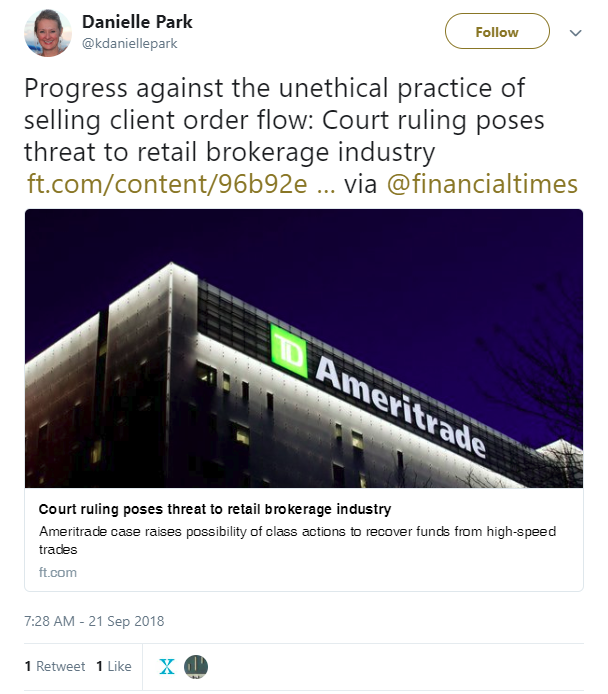 There was another important development this month coming out of the US online brokerage space in which a class action status for a lawsuit against TD Ameritrade was granted claiming that selling the order flow impaired the ability of getting clients to get the best trade execution. While the scope of the class action covers clients of TD Ameritrade between September 2011 and September 2014, it nonetheless establishes a precedent that selling order flow can be characterized as harming clients. The major implication of this lawsuit, should it be successful, is that selling of order flow could cease altogether in which case the “zero commission” trading model would have to find some other way to replace the revenue. For TD Ameritrade that might not be difficult to do, but for zero-commission firms like Robinhood, it could be a real setback to growth.

Taken together, Interactive Brokers listing publicly on the nascent stock exchange IEX seems like some well-calculated chess. Their presence on IEX will be difficult to ignore for the foreseeable future (so bonus marketing points) and they will also have the title of the first listing on this new exchange, whose mandate is to build a fair market for all. Furthermore, with possible regulatory consequences for selling order flow to HFTs creating headwinds for their competitors, Interactive Brokers is well positioned to not be negatively impacted by either the fines or the bad publicity that would accompany such a lawsuit.

Finally, it also sets up an interesting scenario for zero-commission stock trading from firms such as Robinhood who would be walking a dangerous tight-rope by selling order flow. Interactive Brokers does have low costs and so now the pressure to drop commission costs appears to have abated.

The sustainability of online trading and how low prices can go for commissions is still a moving target. In order for online brokerages to be around for any appreciable amount of time, they have to find a way to be profitable. Interactive Brokers has gotten creative and demonstrated that you can’t stand still for very long in the online brokerage space. It’s now up to their peers to respond decisively and in a way that can keep their book of business healthy. And as for the new zero-commission players, they may have to take the very uncool step of ‘unbundling’ and charging for other services or features related to having an online brokerage account.

If there’s one place where you’ll find most of Canada’s online brokerages mentioned in one breath, it’s usually in a comparison website. This week, however, there was one more place in which a significant number of online brokerages were referenced, a class-action lawsuit.

Canada’s online brokerages were in the crosshairs of regulators, investors and the media in a firestorm story that continues to gather steam and focuses on online brokerages charging trailing commissions on certain mutual funds even though these commissions are technically compensation for advisors – something that can’t really happen at an order-execution-only online brokerage.

Although this is not a new story, this week it found new life with wide coverage in the Canadian media, including and especially CBC News’ consumer advocacy show, Go Public as the scope of legal action by Ontario law firm Siskinds LLP and Bates Barristers PC widened to include CIBC and their family of mutual funds. 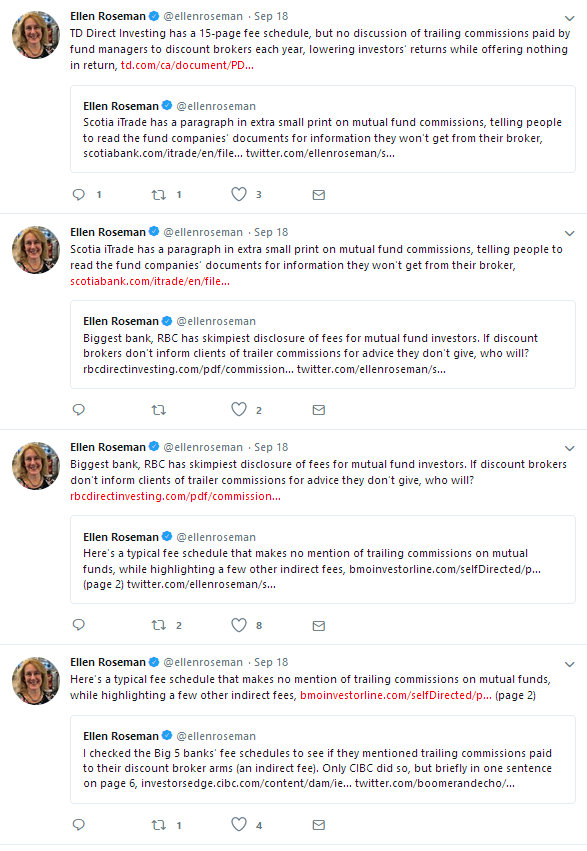 This brings the total number of big banks hit with a class action lawsuit to three: TD, Scotiabank and CIBC. But, the scope doesn’t seem to stop there.

According to the Insurance & Investment Journal, the lawyers leading the action “would like to speak with individuals who held or hold Renaissance mutual funds (which are part of the CIBC mutual fund family) or Series A mutual funds of other mutual fund families through a discount broker.” This is perhaps a signal that other online brokerages could find themselves included in this legal action.

The stakes in this legal battle are already incredibly high – with regulators already weighing in, media picking up the story and consumers who are genuinely incensed. The financial cost is also material – with each of the three class action lawsuits thus far valued at $200M a piece.

Not everyone is on side with piling on the online brokerages or their big bank parents, however. Rob Carrick, a personal finance columnist at the Globe and Mail and one of the most influential voices for DIY investors in Canadian media, took the position (back in April when the first lawsuit was proposed) that when it comes to investing online, it’s buyer beware. His perspective appears to be that if you are signing up for a DIY investor account, you should at least know or understand the basic differences between mutual funds. That said, with more than $25B of the reported $30B (i.e. 83%) in assets at online brokerages in mutual funds that bundle an advice fee within them, it’s safe to say that many of the consumers purchasing mutual funds through their online brokerage don’t know what they’re paying for.

While the actual courts will determine the direction of this legal case, the court of public opinion is already in session. The CBC article alone received 500 comments at the time of publishing the Roundup, which is a phenomenal number of comments on a personal finance issue. Suffice it to say, this story is only going to get bigger before it gets better.

Shifting gears to something lighter, celebrations continued at BMO InvestorLine this past week as [employees at all levels] marked the milestone of 30 years as a Canadian online brokerage. The BMO InvestorLine crew were spotted on social media at an event at the Rec Room in downtown Toronto. 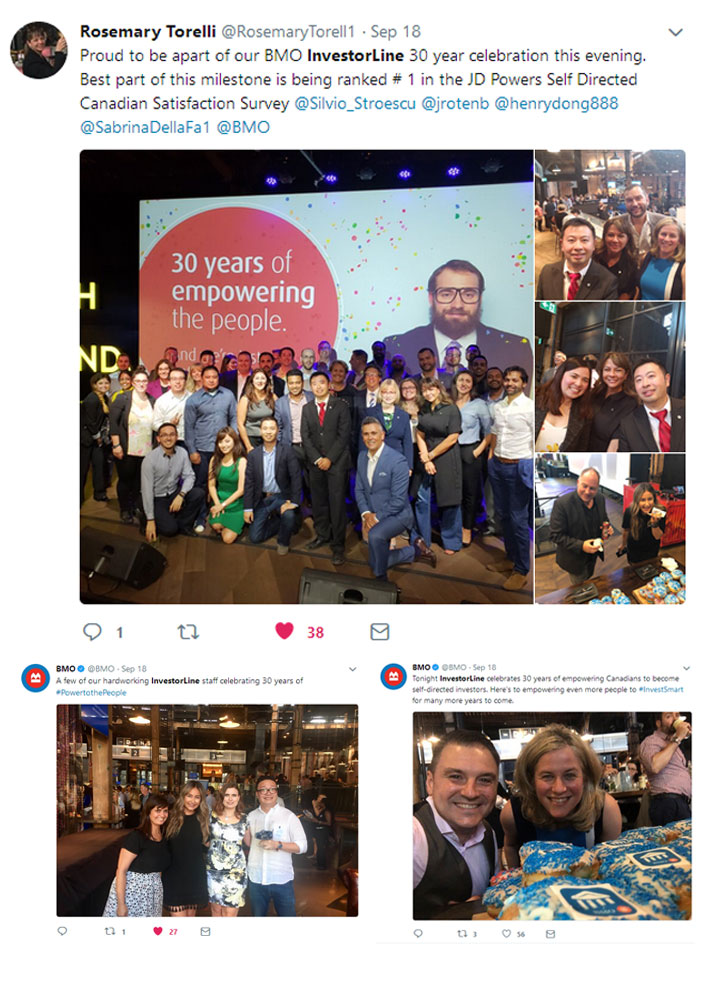 Trading on a newly opened TFSA account can naturally raise concerns about whether or not you’re doing it right. Read what advice others gave one reddit user here  with regards to net value, and timing trades.

This thread in Reddit’s Personal Finance Canada generated an interesting conversation about VGRO, its benchmark and the ways in which a DIY investor can choose to invest.

That’s a wrap for yet another unbe-leaf-able trading week. It’s been a literal whirlwind day for many folks in Ontario and Quebec and we hope all our readers are staying safe and dry this weekend. Enjoy what you can of the break, next week may be even wilder.