What a week of extremes. The Eagles won the Super Bowl, the Dow Jones cratered, Elon Musk’s rocket took off, XIV blew up and Omarosa is on Big Brother. But those weren’t the only headlines this week. Unfortunately for many DIY investors, also in the headlines again were online brokerage outages.

In this week’s roundup, we take a deep dive into the trading outage issues plaguing the online brokerage space and analyze where the scales are tipping for bank-owned online brokerages. From there we’ll venture south of the border to see the latest developments from one online brokerage and the launch of a new breed on discount brokerages. As always we’ll wrap up with what DIY investors are chatting about on Twiter and in the DIY investor forums.

Something has got to give. Yet another week where investors at a Canadian online brokerage were shut out of the market at one of the most volatile markets in the past two years. And, once again, the outage was covered in news outlets like the Globe and Mail and on BNN. Also, let’s not forget the firestorm on Twitter.

This past week it was RBC Direct Investing who suffered an outage that was attributed to a ‘fibre optic cable’. No further details were reported by the Globe and Mail other than to say that a fix had been deployed although that came as cold comfort to the investors caught in the vortex of turbulent market selloff. 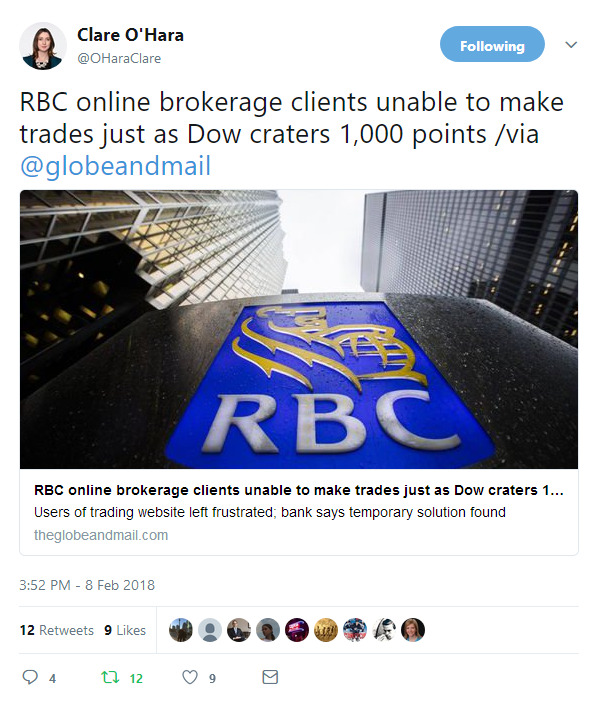 Canadian online brokerages weren’t the only brokerages to go down, however, as major US online brokerages Fidelity, TD Ameritrade and Charles Schwab also reported technical issues related to overwhelming trading volume. In the case of Fidelity clients, the last major service interruption was in November. For Canadian DIY investors, however, the long wait times on the phones or platform outages (which then trigger long wait times on the phones) seem like a much more frequent occurrence.

Suffice to say, it’s safe to assume that many DIY investors are not pleased. But has the issue reached a boiling point with investors? Should the online brokerages be concerned?

It was interesting to view the coverage of RBC Direct Investing’s outage on BNN this past week, specifically the segment featuring Dale Jackson which reported on the service interruption, the fall out with DIY investors and the response by independent online brokerages. While the first half of the segment covered the outage, it was the latter portion of the discussion which stood out, in particular because of the perspective given on investor dissatisfaction over the outages and the suggestion that DIY investors are abandoning bank-owned brokerages in favour of independent brokerages. 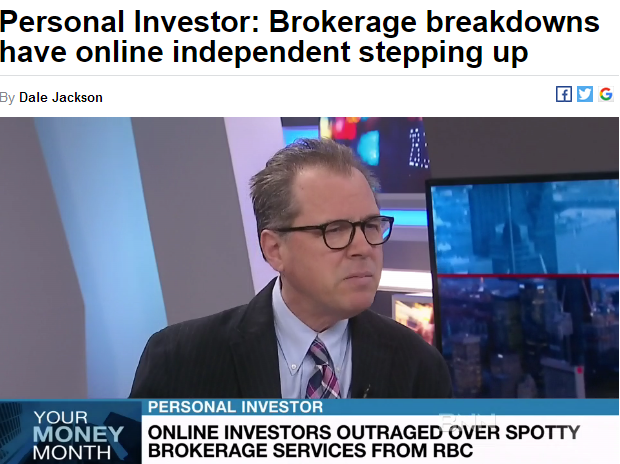 Jackson cited a 2017 Surviscor study on overall online brokerage experience that measures a number of different factors about an online brokerage. In that study, Qtrade Investor and Questrade performed first and second respectively. And, the inference drawn suggested that DIY investors are dissatisfied with bank-owned online brokerage service and fleeing to non-bank owned brokerages.

At issue with that inference is whether “online brokerage experience” equates to or is a reliable proxy for “investor satisfaction” especially in the context of a conversation on service levels shortcomings.

As the table above shows, however, there is considerable variation within the bank-owned brokerage and the non-bank-owned group, but the broader point is that just because an online brokerage is affiliated with or owned by a bank, doesn’t necessarily mean it will be “better” at service, overall online experience or investor satisfaction.

It’s certainly fair to infer that online investor sentiment appears to be negative as a result of recent outages, but the hard data on account migration or turnover away from bank-owned brokerages as a result of investor “dissatisfaction” is not actually cited and, as a result, cannot be verified. It might be fair to suggest that there is already a trend or shift in consumer preferences for non-bank-owned brokerages, but more data would be needed.

The fact that this data – along with incidences of outages – cannot be verified publicly raises the question of whether or not Canadian online brokerages need a regulatory requirement to report some operating metrics publicly so that DIY investors can make unbiased, data-driven decisions about who they should trust with their investments – and who will provide reliable access to those investments. In the absence of that data, consumers are left to turn to other 3rd party ratings and evaluations, each with different approaches to measuring components of the online brokerage experience.

As highlighted in several roundups already in 2018, online brokerages are under a microscope. It seems like only a matter of time before consumer sentiment starts to drive political attention, especially if outages on busy market days continue. If they’re not at a boiling point already, DIY investors are certainly on the path there.

In terms of whether there is cause for concern for the online brokerages – and especially the bank owned online brokerages, there was an interesting poll conducted by BNN which asked: “How do you react when your bank provides disappointing service?” 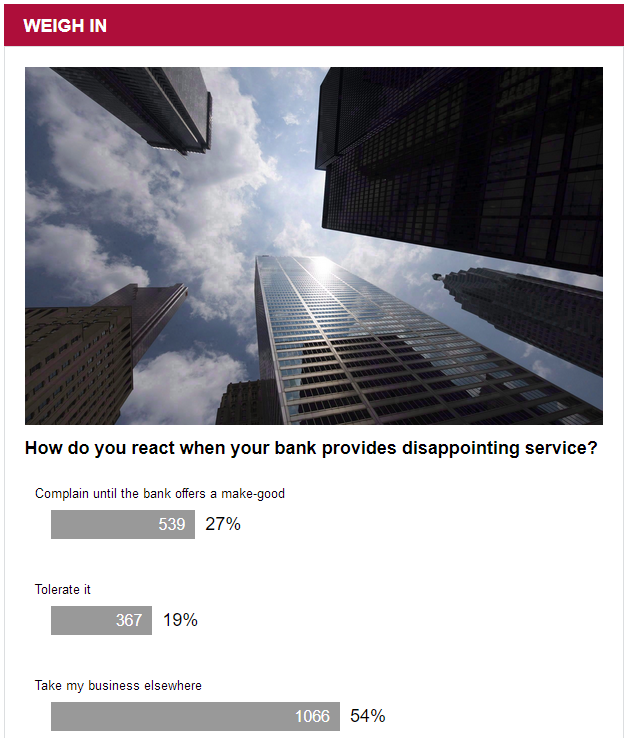 As of the writing of this post the results below paint a fairly grim picture for a bank that provides “disappointing service” with 54% of respondents stating that they would take their business elsewhere. And, we’ve got an inkling as to where that business may be headed.

If there’s one group of folks who are welcoming the volatility it’s not traders, it’s their online brokerages. The meltdown of the XIV proved that traders can get things spectacularly wrong, however with trading volumes at levels not seen in years, online brokerages must be smiling – at least those that didn’t suffer interruptions during trading hours.

With all of the other news that coincided with the regular release of trading metrics from Interactive Brokers, we thought it would be interesting to cycle back to those stats to see what traders and investors at the typically active end of the market were up to in January in the US.

By all measures, it appears that Interactive Brokers crushed their numbers right out of the gate in 2018. Not only were Daily Average Revenue Trades 40% higher than a year ago (and 29% higher than in December), client accounts grew 27% in a year, margin loan balances grew 61% in a year and client equity grew 50% higher in a year. Again, for DIY investors to take note of, the average commission per cleared client order was $2.59 for stocks and $6.03 for options.

It’s still noteworthy that commissions for trades at Interactive Brokers are substantially lower than those of their American counterparts and demonstrate the case that commission costs in Canada are almost certainly going to continue to drift lower.

While Interactive Brokers is a known competitor in the online brokerage space even here in Canada, another interesting development this week in the US could also broaden who will possibly challenge existing Canadian brokerages (and it’s not Robinhood). Earlier this week, Overstock.com launched a partnership with Siebert Financial Corp to offer a discount online trading platform via FinanceHub (owned by Overstock.com). 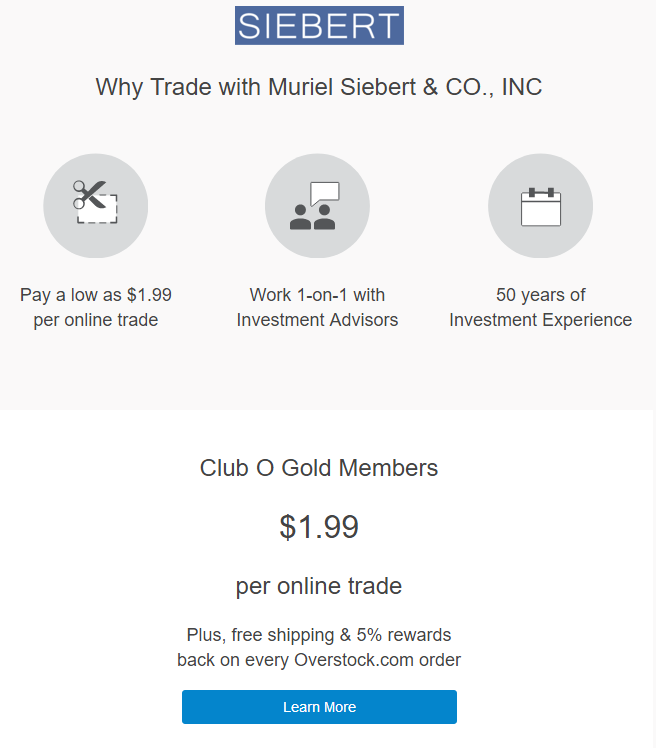 The online discount trading platform, Muriel Siebert & Co, offers $1.99 trades for Club O Gold Members (an Overstock membership program). This is the second big announcement by Overstock.com this year, with an earlier move to offer a robo-advisor. The reason this is such a noteworthy development is because it demonstrates that large online retailers who have an installed client base and a savviness with technology, can move into the financial services space.

For an online brokerage, such as Interactive Brokerage, the commission fees are already generally fairly low and as such, they are likely not going to have to lower prices to match or compete. Conversely, larger online brokerages will be watching to see if Overstock’s model is successful and if so, they’ll have to budget for a world in which a larger online retail brand – such as Amazon – may try to sweeten the deal on a prime membership by getting a discount on trading commissions.

It’s that time of year again when tax talk is all the rage. Here are a couple of interesting posts of issues that DIY investors encountered in trying to get their tax documentation in order.

Experience is sometimes a tough teacher. For one DIY investor, they missed out on a promo code offer because they didn’t input their code in the right place. Find out what this post offers other investors as a cautionary tale when opening an account to get the deal.

T.G.I.F. Late as it is, thankfully the weekend is here. The good news is there’s no shortage of screen time to get in (other than staring at charts) and likely no shortage of drama either. Especially now that volatility is blowing through the markets. Hang on to your hats, next week should be fun.