The Olympics are here and in full swing. As the world’s attention turns to the winter games, closer to home there is a fierce competition going on between Canadian online brokerages. The big prize: winning the share of wallet of Canadian investors. Interestingly, like the Olympics, there is also a fair bit of judging and controversy this week.

This week’s roundup takes a deep dive on the widely anticipated 2018 Globe and Mail Canadian online brokerage rankings and several of the noteworthy observations about this year’s rankings and the state of the industry. Next, a quick but possibly groundbreaking move by one of Canada’s junior stock exchanges that could bring blockchain into DIY investing (legitimately). As always, we’ll take a look at what DIY investors were talking about on Twitter and in the investor forums.

It’s hard to believe but the 19th edition of the Canadian online brokerage rankings were released this week. The journey here has certainly been one of endurance as technology has evolved considerably since 1999 and pricing, for the most part, has come down dramatically.

Before diving into the results, it is interesting to note a few observations about the study and presentation of the latest ranking data.

The first thing that stands out is that this year’s ratings showed up much later than they usually do. Instead of a typical publish date of November or December, the ratings showed up this year with just two weeks to go before the RSP deadline. Perhaps this is timed for those last-minute shoppers, however, given the sharp spike in interest in DIY investing that hit in December and January, these rankings would likely have grabbed considerable attention in the wake of the interest and online brokerage outages that took place to kick off the year.

As with previous editions, this year’s rankings use the letter grade system to evaluate the brokerages overall performance, with key measurements of the discount brokerage field consisting of parameters such as:

Another tradition of the online brokerage rankings is that they added some newer features to the way the information was presented. This year’s comparisons are a bit more dynamic than year’s past, with the ability to compare specific brokerages using the factors listed above. Gone is the large table view which provides a bird’s eye look at the field across all features and instead a more focused look is possible. Based on the design, it appears a bit easier to navigate the comparison on a mobile screen than having to scroll left or right on a table, so the mobile user was clearly considered when putting this review feature in place.

This year’s rankings are also behind a pay-wall, which means that only subscribers to the Globe and Mail can review in detail the results of this year’s study. Fortunately, we’ve summarized and reported the results below and this year’s scores will be added to each broker profile so readers can compare the historical performance of a particular online brokerage in a variety of ratings. Because the Globe and Mail has disabled commenting on articles as of December 2017, this year, it was unfortunate we were not able to review the reactions of readers to the results as the responses also offer some insight as to whether the online brokerage rankings resonated with general sentiment.

With the stage set for the results themselves, let’s dive in to see what stood out from the online brokerage field this year. 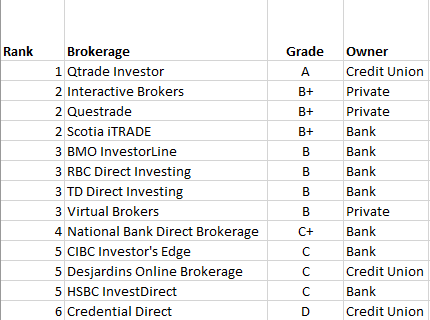 There were a number of very interesting observations about this year’s rankings however to keep things digestible, we’ve selected three of the most interesting (to us) factors to hone in on.

In an interesting marketing quirk, the fact that Questrade – the only other Canadian online brokerage that starts with Q and has ‘trade’ in its branding, also finished on the podium (in a three-way tie with Interactive Brokers and Scotia iTRADE) means that there is sure to be some confusion as to which brokerage is which. Given how much more advertising Questrade does than Qtrade, however, this may actually tilt in Qtrade Investor’s favour.

Regular readers of the weekly roundup will note that we often report the (relatively low) average commission paid by IB clients and the unbroken streak of constant quarterly growth in accounts observed for the better part of a decade. This kind of attention on a brand many Canadian investors might not have considered is likely to pose a challenge to the incumbent online brokerages. Further, it also appears that Interactive Brokers is aggressively stepping up their marketing efforts in Canada.

The image below was snapped on BNN’s homepage, a very bold move by IB Canada to be front and centre with Canadian DIY investors. Look for Interactive Brokers to continue to make their presence felt in Canada with a broader market of DIY investors than the “active trader” segment.

There was one curious ranking which seems somewhat controversial – and that is awarding Scotia iTRADE, the only bank-owned online brokerage to finish tied for second place, with a B+.

One of the biggest points of debate is the fact that Scotia iTRADE is the only Canadian online brokerage to charge a standard commission pricing of at least $24.99 for accounts with less than $50,000. By presenting the rate that Scotia iTRADE charges as 9.99 per trade alongside other Canadian brokerages that charge $9.99 or less to all clients regardless of account balance creates a perception of parity in pricing when it doesn’t exist.

To be fair, there was a footnote about the commission pricing being higher for individuals with less than $50,000 however the spirit of the Globe and Mail’s rankings have usually leaned towards features that save consumers – in particular younger or more modest portfolio holders – from paying very high fees. To be in the same rank as either Questrade or Interactive Brokers, both of whom have sharply lower pricing by comparison, doesn’t quite stack up. Pricing aside, there was also a versatility gap when it came to US dollar registered accounts that is highlighted in the table above. Specifically, Scotia iTRADE did not offer any (at the time of publication) whereas brokerages such as Virtual Brokers offered a higher number.

The justification that was provided (which acknowledged looking past both the pricing and lack of USD registered accounts) was that the user experience, in particular the website, was more than helpful enough to make up for the value difference. To be fair, for clients with more than $50,000 at Scotia iTRADE, the value equation certainly appears compelling, however that is a rather sizeable hurdle to overcome for many beginner DIY investors.

One of the important takeaways about the Globe and Mail rankings is that there is a high degree of subjectivity that goes into awarding the final grade. The ranking breakdowns were not provided at the time of publishing so it is difficult to see the weights that each factor played in determining the grades, however the apparent importance of website experience coupled with the subjective nature of that rating means that DIY investors relying on the rankings should understand that their experience may vary from the assessments put forward by Rob Carrick.

Nevertheless, this year’s online brokerage rankings do contain interesting nuggets worth reading and considering when choosing a possible online brokerage. The new dynamic features add an interesting user experience to the comparison process and with additional coverage of Interactive Brokers, this year’s results seem to reaffirm Carrick’s view that bank-owned online brokerages aren’t necessarily the gold standard, rather, the independent and non-bank-owned options are stronger competitors than they’ve ever been.

Blockchain on the Horizon

The Canadian Securities Exchange announced this week that they are seeking regulatory clearance to launch a clearing and settlement platform powered by blockchain that will enable trades to settle instantly. Moreover, this platform will also enable the CSE to allow companies to issue Security Token Offerings (STOs) that will utilize smart contracts as a mechanism to bring regulated securities to public markets. 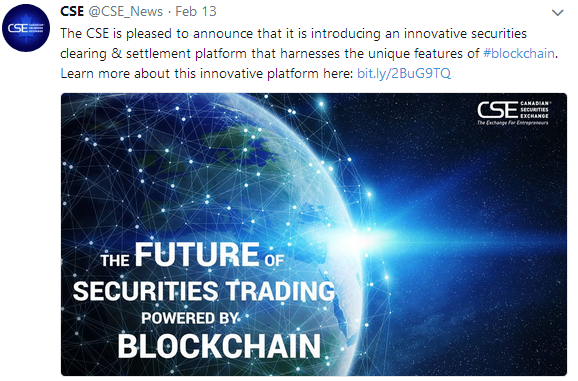 On the settlement front, this is a potential game changer for investors who would no longer have to wait days for trades to settle and as such wait to access funds from the sale of a stock position. More than the time factor, this could be the next catalyst for trading commission prices to go lower as the cost for clearing and settling trades would likely also be lower with fewer intermediary steps and a lower cost for the online brokerages to plug into this clearing system.

Right now, there’s still a regulatory process that will dictate the launch of this platform however the announcement in and of itself should be enough to spur the current (and only) clearing house in Canada to explore means to innovate.

TFSAs can be powerful vehicles for DIY investors to build wealth, but there are finer points to understanding how they work. This post, from the Canadian Money Forum, provides a valuable look at how the ins and outs of the TFSA work for DIY investors.

The first time in the markets can be an intimidating moment. This post from reddit’s Canadian Investor forum thread highlights one user’s experience and also contains a very interesting (albeit brief) comparison of Interactive Brokers and Questrade – two names that made news this week.

That’s a wrap on another volatile week in the markets. Thankfully it’s a long weekend for Canadian investors which also happens to coincide with the lunar New Year. Have a safe, happy and relaxing long weekend and best wishes for a prosperous year of the dog!