In the stock markets, is it better to be lucky or smart? Even though the markets closed out the week on Friday the 13th, it seems that fortune is smiling on the markets with indices holding near their all-time highs. Is it a false sense of confidence, or are the “warning signs” no more predictive than superstitions?

In this edition of the Roundup, we dive into the mixed signals being presented by one online brokerage in the US that has some observers thinking that things are going to go from bad to worse for some online brokers. Of course crises happen, and one Canadian online broker provided an interesting demonstration of calm under social media fire on a touchy subject for investors. We’ve trimmed the forum chatter for this Roundup but still have a healthy serving of Twitter content to wrap up on.

By many accounts, the stock markets remain in good shape. With many indices drifting near their all-time highs, it seems like markets are paying attention to the “strong economy” narratives in Canada and the US, and not so much to the “inverted yield curve” signals that portend economic slowdowns.

An article in the Wall Street Journal reported that Charles Schwab, the largest online brokerage in the US, would be cutting about 3% of its workforce, or approximately 600 jobs. The primary culprit: interest rates.

To understand why interest rates, and in particular low interest rates, matter so much to an online brokerage like Schwab, it is important to recognize that the size of this online brokerage – which has over $3.75 trillion dollars (USD) in assets under management – plays a significant role in determining how quickly it can navigate through averse economic conditions.

Over the past four years, Schwab has undertaken an important transition in terms of where their revenues originate. As for any online brokerage, trading commissions have been important to the revenues of the firm, however, over the past few years, efforts to diversify away from relying just on commission revenue mean that other fee generating services, such as advice, or growing assets to a massive scale and collecting interest, have come to play important parts in the total revenue of the company.

Their decision to lay off 3% of their workforce appears anchored in cutting costs to stay competitive. Regardless of the exact reasons, an organization the size of Schwab must make moves well in advance of deteriorating business conditions.

Interestingly, they saw the writing on the wall with the battle for lower-price stock commission prices and potentially lower volatility and, as a result of diversifying their reliance on trading commission revenues, have been able to achieve solid growth in new accounts and fend off other low-commission and commission-free competitors. They now generate approximately 6.5% of their total revenues from trading commissions with the remainder coming from other sources such as fee-based advice services (29.3%) and net interest (61.5%).

Not too long after Schwab made these moves to diversify the sources of their business revenue, other online brokerages followed suit by doing something similar – notably TD Ameritrade.

What the job cuts at Schwab signal, however, is that interest rates may stay depressed for quite some time or are going to get much lower. To that end, the importance that people play in the online brokerage business, at least according to Schwab’s math, is dwindling. More automation and reliance on software and digital systems means businesses like online brokerages can do more with fewer people.

Naturally the latest moves by Schwab prompt the question of whether something similar could happen to online brokerages here in Canada?

It is not impossible that the cuts to interest rates that are taking place across the globe impact Canadian financial service players at one level or another. For the online brokerages in Canada, however, there is still a heavy reliance of commissions to generate revenue. And while the Bank of Canada is standing firm on interest rates here, without increased trading activity, or in the face of declining commission prices, there aren’t too many other levers left to pull for Canadian online brokers to make their line of business profitable.

As one writer in the US put it, this is like seeing a “canary lying dead in the mouth of a coal mine.” With negative interest rates showing up across the globe and the calls by the US President for that to happen in the US, and the head of JP Morgan telegraphing that they too are exploring the scenario, the big picture signals challenging times ahead for financial service providers.

For online brokerages in Canada, there are two competing forces at play that will have to be reconciled. On the one hand, lower interest rates, or the spectre of negative interest rates, might prompt individual investors to get out of cash (finally) and into a different asset class for which they would (likely) need an online brokerage account. Conversely, in the face of market volatility and uncertainty that can hinge on a Twitter message, actively trading into the storm also seems like bad move.

Now that the largest online brokerage in the US has decided that it’s time to cut its workforce by 3%, it will invariably raise questions about layoffs at other US online brokerages. As for Canadian brokerages, it seems that as long as interest rates stay where they are in Canada, and there are opportunities to trade in a market that might be immune to Twitter tirades, there might be a bit more of a reprieve.

Nonetheless, if in a hyper-competitive market like the US, the largest and arguably best insulated online brokerage has pared back its head count, what must Canadian online brokerages have to be prepared to do to control costs?

Peace of mind is, arguably, one of the most important sentiments that a financial service provider can give to their clients. For DIY investors, the Canadian Insurance Protection Fund (CIPF) offers some measure of confidence by protecting the investments of individual investors to the tune of $1 million dollars in the event that the online brokerage somehow goes out of business. In an increasingly online world, however, another crucial piece of coverage that investors seek out and ask for when it comes to parking a significant portion of their nest-egg with a provider is some kind of online security guarantee.

It is against this backdrop that an interesting post, which made it to the Personal Finance Canada thread on Reddit, sparked immediate and comprehensive discussion with investors and eventually culminated in a revision of the Questrade security guarantee. 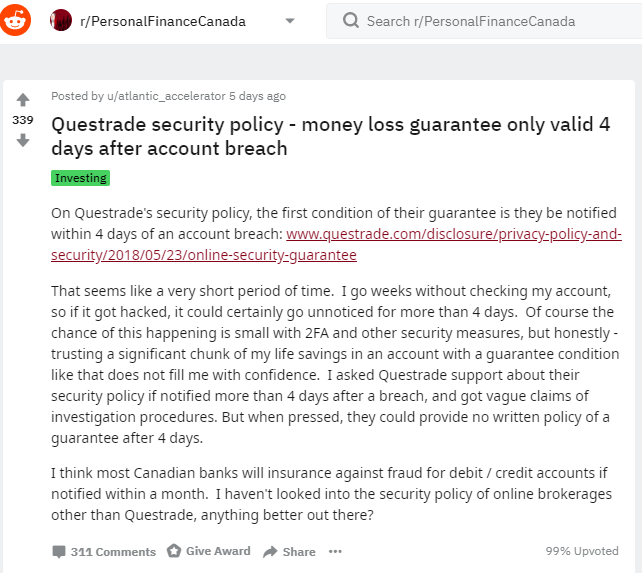 According to the (now) previous security guarantee policy, Questrade required individuals to report any suspicious activity in their account within four days of that activity taking place. While the policy was not necessarily hidden, it did go unnoticed by many until one user raised this in the Reddit thread, at which point a firestorm of commentary ensued.

The commentary itself makes for instructive and colourful reading. What was most compelling about this incident, however, was the speed with which the questions prompted a response from Questrade, as well as the turn around time for a revision of their security policy. Here is the initial response from Questrade on the Reddit channel, 2 days after the original post: 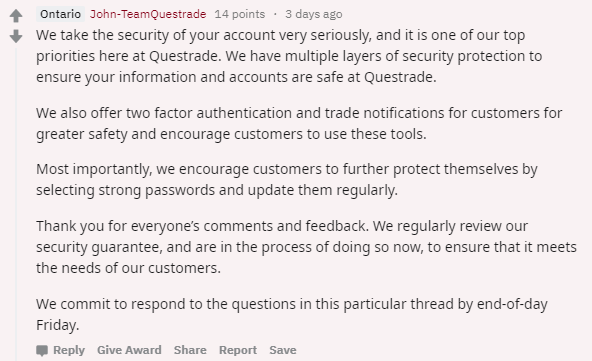 And here is the follow up response from Questrade indicating that, in fact, they have updated their security policy to require clients notify Questrade of any suspicious activity within six days of receiving a monthly electronic statement. 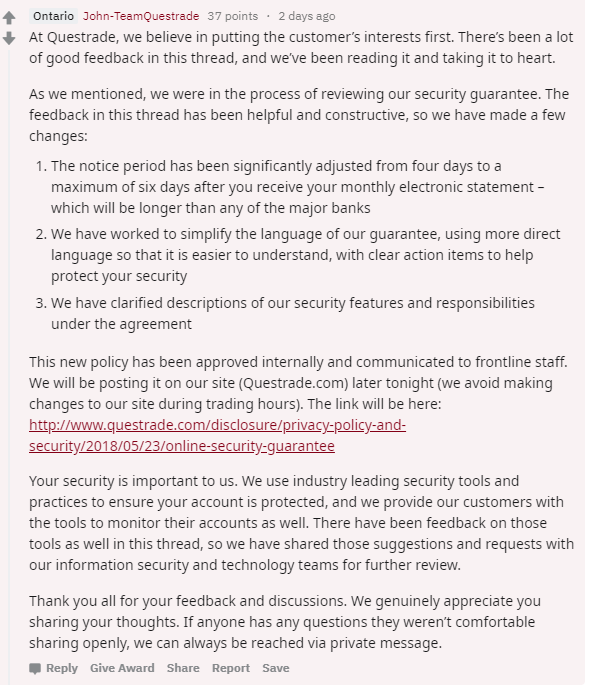 There are a number of interesting takeaways from this incident that are likely to prompt some changes to take place across the Canadian online brokerage space. One of the first important observations is that online security matters don’t matter to DIY investors until they do.

There were so many DIY investors who were taken by surprise at the Questrade online security guarantee’s “fine print” terms, and when they became aware of the actual details, they were unpleasantly surprised. The massive response from DIY investors will likely prompt other online brokers to review their policies to ensure a) that they’re offering competitive coverage for online security breaches, and b) that they do a better job of communicating that guarantee to their clients.

Another important set of observations relates to the credibility Questrade earned in the face of a potentially significant crisis.

First, they were able to address the issue on Reddit – where they have a history of responding to clients or individuals talking to/about Questrade – and commit to a timeline for resolution. Second, they were able to rectify the situation within a week; a new policy, better terms and a jab at the security policies of other providers for good measure. That whole episode played out publicly on Reddit for the world to go back and comb through, and while there will certainly be spin that could be applied here, ultimately, Questrade righted a wrong in a very public fashion.

Now, granted that Questrade landed themselves in hot water by having a security guarantee structured with such a short time frame for notification, but the key takeaway for customers is that it got resolved. Surely some customers were put off, but for the clients that love and speak up for Questrade, this will cement yet another reason why they would recommend or stand up for the online brokerage in the melee of financial forums. Based on the watershed of concern that was raised by this incident, it is going to be very interesting to see how/if other online brokerages start to highlight online security as a selling point.

A Redditor’s financial advisor successfully moved to a new job, and now this Redditor is wondering whether it’s better to follow the advisor, or to stay with the current company.  Read suggestions from the forum here.

That’s a wrap on another choppy week. After what looks like a bit of a reprieve from trade war, the drums of actual conflict were beating again and oil prices are now in the spotlight. There’s likely to be no shortage of news to tune into this week but for the set-it-and-forget-it crowd, thankfully there’s also lots of other places to tune out the drama.