The old trading adage of sell in May and go away clearly did not apply to this week’s market activity. It’s still early enough in the month that anything can happen, however. With the announcement of the end of decades of hostilities between North and South Korea, it’s as good as any segue into the action taking place in the Canadian discount brokerage space.

In this edition of the roundup we check in on the latest updates from an important merger taking place among two online brokerages. Next, we’ll review the latest deals and promotions activity for the beginning of a new month. From there, we’ll take a look at what DIY investors were chatting about on Twitter and in the investor forums.

After the merger between Credential Direct, Qtrade Investor and NEI Investments to form Aviso Wealth was announced late last year, it wasn’t exactly clear how and when things would unfold. Earlier in April, however, we learned that the merger between the three firms was officially finalized and, as of this week, the Credential Direct website started to direct new and existing clients to the Qtrade Investor product. 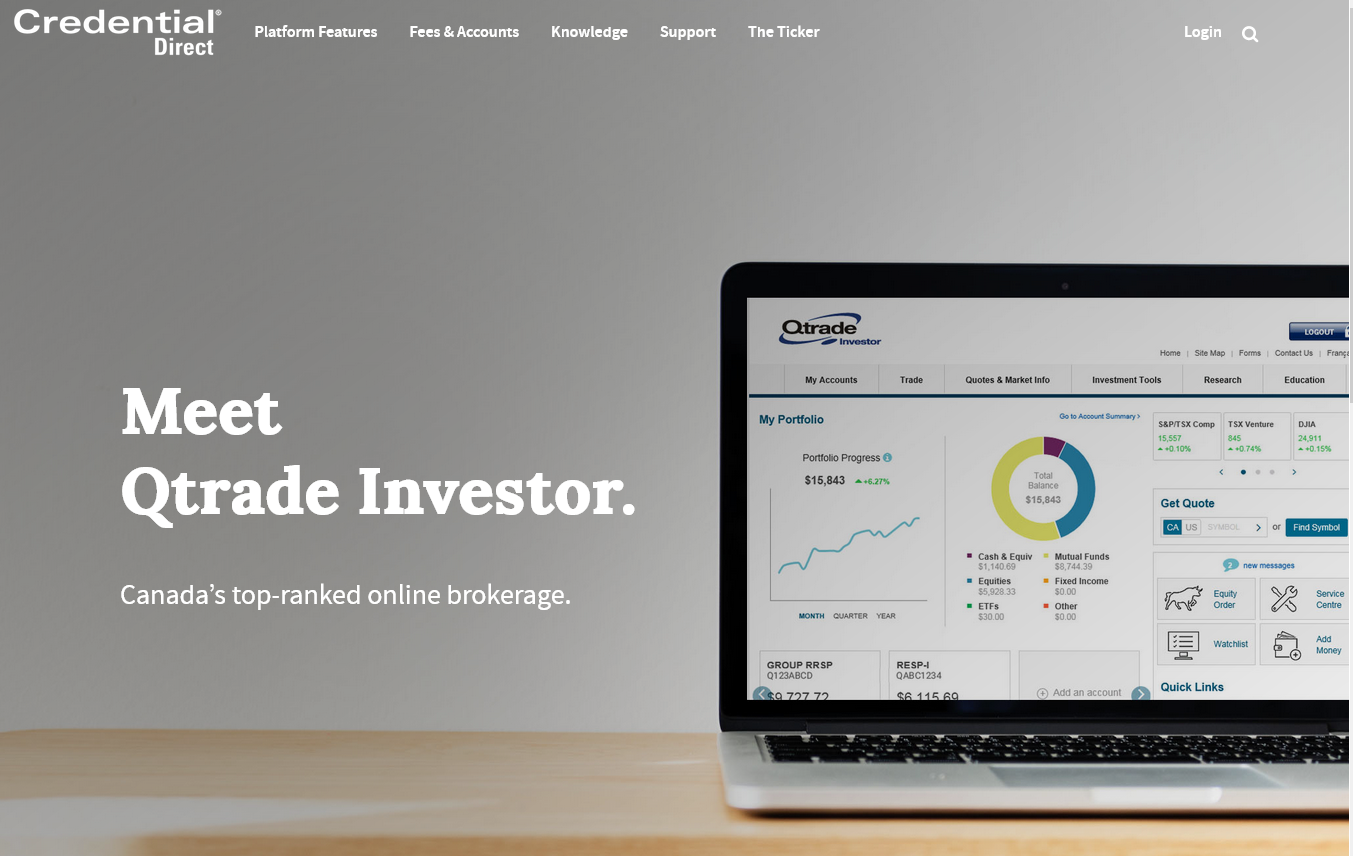 As we mentioned in last week’s roundup, the Canadian online brokerage landscape has seen some major moves over the past several months. With acquisitions of Virtual Brokers and Jitneytrade by much larger wealth management firms, as well as this latest merger between Qtrade Investor and Credential Direct, the rest of the year for the Canadian discount brokerage landscape should shape up to be quite interesting. After years of recognition that there were simply too many online brokerages in Canada, the field appears to be narrowing. And, it is likely that there is still further consolidation to come as online brokerages wrestle with staying competitive and profitable at the same time.

While consolidation and removing of an online brokerage from the list of providers might reduce competition, the reality is that Credential Direct was primarily influential in Western Canada and in terms of market share, they were certainly on the small end. As a result, it is unlikely to tip the scales with either investors or among other industry competitors.

According to the Credential Direct website, there will be a transition period over which existing clients will get migrated over to Qtrade’s platform. The target appears to be this coming fall for that to be completed.

That said, it will be interesting to see how the rest of the Canadian online brokerage field responds to what will be a larger Qtrade Investor competitor. Aviso, the parent to Qtrade, will reports having a combined $55 billion in assets under management and over 500,000 clients collectively across the country, so other Canadian online brokerages will have a considerably larger organization to contend with.

It will also be interesting to see where, from a marketing perspective, the Qtrade Investor brand is going to push and what new resources it may have to push with. For example, could pricing or platform improvements be justified given the larger scale? With Credential Direct previously being active on social media, could this be the tipping point to enable Qtrade Investor to wade into the social waters?

For DIY investors, fewer choices may, in this case, provide stronger choices.  Without having to allocate resources to competing regionally against Credential Direct, could Qtrade Investor now allocate those resources to better servicing their existing clients? Certainly, for Credential Direct clientele, there will be access to better pricing (in most cases), service and trading experiences.

While Qtrade is likely to become even more of a formidable opponent to the bank-owned online brokerage space, the lesson this merger and additional acquisitions have shown to be true, is that the playbook to surviving the online brokerage space in Canada requires scale. And, the race for new clients and their assets, is almost certainly going to become even more fierce as a result.

The big story in this month’s deals and promotions section is the pullback in offers from Canada’s discount brokers.

After what was an abnormally busy start to 2018, things have definitely quieted down on the deals front with barely more than 20 advertised offers currently in play. Perhaps the greatest concern for DIY investors looking for a bonus to open an account is the general absence of offers in the cash back promotions section.

Currently, BMO InvestorLine is the sole Canadian discount brokerage offering a cash back promotional offer – something that is very unusual considering how competitive the online brokerage space is to acquire new clientele. 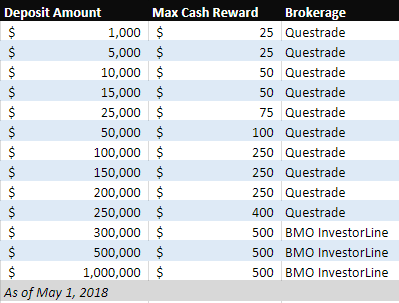 All is not lost for investors looking for a cash back promotion, however. DIY investors can also access the Questrade referral offer posted in the deals section but aside from BMO’s offer, the only other way to access a cash back offer at the moment is via referral.

Currently there are three of these offers available from BMO InvestorLine, Questrade and Scotia iTrade. At this point, for new clients looking to open an online investing account, it pays to be extra nice to friends at these brokerages.

Fortunately, there is still the cornerstone offer for coverage of transfer fees available at most brokerages. So, for those looking to try a new provider, that door is certainly open.

Don’t expect the drought to last too long though. It is unlikely that BMO InvestorLine and Questrade will be left unchallenged in the cash back space, especially considering how popular these offers tend to be with folks opening a new account.

With marijuana legalization on the horizon, and the conversation on blockchain still simmering, there are a couple of possible catalysts in play to entice online investors back into the market. Finally, bank-owned brokerages aren’t usually so chivalrous when it comes to ceding market share, so there’s a business case to be made for at least another bank owned brokerage to step back onto the field while it is not so crowded.

We’ll continue monitoring the deals landscape for new movements, but for the time being, only a small number of brokerages are in the deals spotlight, which we’re guessing is totally fine by them.

The Financial Wisdom Forum deserves credit for sharing the news that TD Direct Investing now offers BC residents access to the British Columbia Training and Education Savings Grant (BCTESG) (here is the reference link to TD).

Battle of the Q’s

Questrade or Qtrade? The question is now more pertinent than ever as the narrowing field of online brokerages (that are not bank-owned) casts a spotlight on these two firms. This post from Canadian Money Forum provides some interesting perspectives on both.

That’s it for another week. With the world no longer on the brink of war and the economy powering along, even Elon Musk found things a bit…boring. Fortunately for him (and us) there’s plenty of other (cooler) things to be looking at heading into the weekend instead of stock charts. Have a great weekend and #Maythe4thbewithyou.