With the first day of fall arriving this week, it’s unbe”leaf”able how fast time flies. And while the news was busy reporting world leaders trading insults, stock market charts show that the investing world continues to be busy trading shares, as trends continue moving up and to the right. Curiously, charts tracking performance of Canadian online brokerages are hard to come by but fortunately we’ve put together something special for this edition of the roundup that looks at the trends in online brokerage performance.

This week, we take a deep dive into the latest Canadian online brokerage rankings from J.D. Power and crunch some numbers to uncover how Canada’s discount brokerages are keeping pace with changing investor needs. From there we’ll take a quick peek at what’s been happening on social media and what investors are talking about on the forums.

The latest results from the 9th iteration of J.D. Power’s Canadian self-directed investor satisfaction study were published last week and paint an interesting, somewhat paradoxical, picture of the world in 2017 for DIY investors and Canadian discount brokerages.

On the one hand, the insights from a survey of over 2600 DIY investors surveyed in May and June of this year indicated that more than half of respondents indicated there is a “current or imminent need for full-service advice” suggesting that that online brokerages “have significant assets at risk of attrition if they are not able to meet this need.” Simply put, it looks like lots of DIY investors may be seeking to not DIY so much anymore.

Of course, why that insight is so interesting is because scores for DIY investor satisfaction with Canadian online brokerages have, at least for the past five years that we checked, not ever been this high on the J.D. Power rankings study. Top online brokerage this year, Desjardins Online Brokerage, managed to achieve a rating of 785 (out of 1,000), a score well above the highs achieved by Canadian brokerages since 2013. So what gives?

This was one a few curiousities that led us to take a step back to see what a long-term analysis of these annual survey results would reveal. After all, DIY investors looking for an online brokerage do so hopefully never having to look to change to another brokerage. The notion that maybe preferences or needs of investors are changing, especially when considering millennials, prompted us to look back on previous rankings for some additional context on these latest figures.

Canadian discount brokerage rankings, for the most part, present an annual snapshot into the opinions of investors or online brokerage researchers. While it does offer a ‘current’ view, one shortcoming of presenting data in this way is that it becomes tricky to establish what the track record is for a particular brokerage is over time. In the case of J.D. Power’s latest rankings, asking, for example, how consistent an online brokerage is at satisfying clients, might offer additional depth for someone looking for a longer term relationship with their online brokerage.

As such, we decided to put J.D. Power’s 2017 discount brokerage rankings into context by comparing results from the past five years’ (from 2013 to 2017 inclusive) worth of scores. And, to borrow from a buzzfeed style reference, what we found was very cool.

Now, before going down the data rabbit hole, we should mention that like investor preferences, the investor satisfaction study has also evolved over time – so take the year to year comparison with a grain of salt. Nonetheless, the rationale for comparing year over year results is based on the assumption that investor satisfaction (however it may be defined) is important as an end point.

Insight 1: Satisfaction is on the rise

The first very interesting insight is that the scores among Canadian online brokerages on the J.D. Power investor satisfaction study are improving for the Canadian industry as a whole.

This uptrend in satisfaction levels may be a reflection of the efforts put in by these brokerages to improve the customer experience overall, or (less likely) the lowering of standards by consumers as to what they’re going to get from an online brokerage. Based on efforts by big Canadian banks, for example, there have been numerous resources allocated to improving their image and client experience, in branches and online and it appears to be paying off. 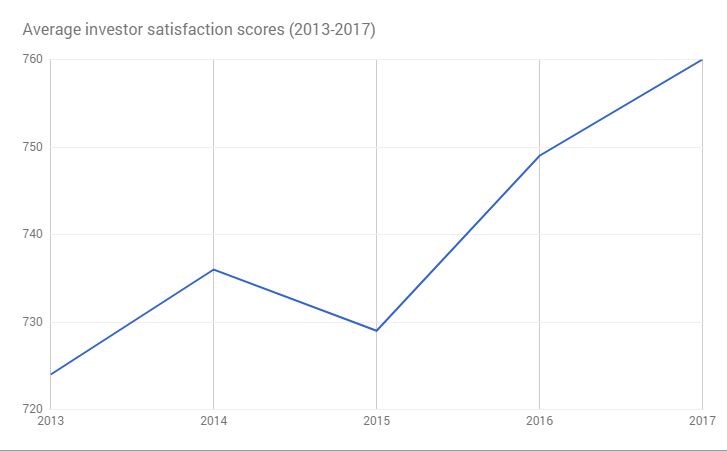 Looked at another way, the good news is that Canadian DIY investors are more satisfied with their online brokerages than at any point in the previous five years. In fact, the firm that put in the lowest score in terms of investor satisfaction in 2017 (Questrade) scored 752 out of 1,000. To put that into context, in 2016 there were only two out of 10 firms with scores higher than 752 – BMO InvestorLine (762) and Desjardins Online Brokerage (774). 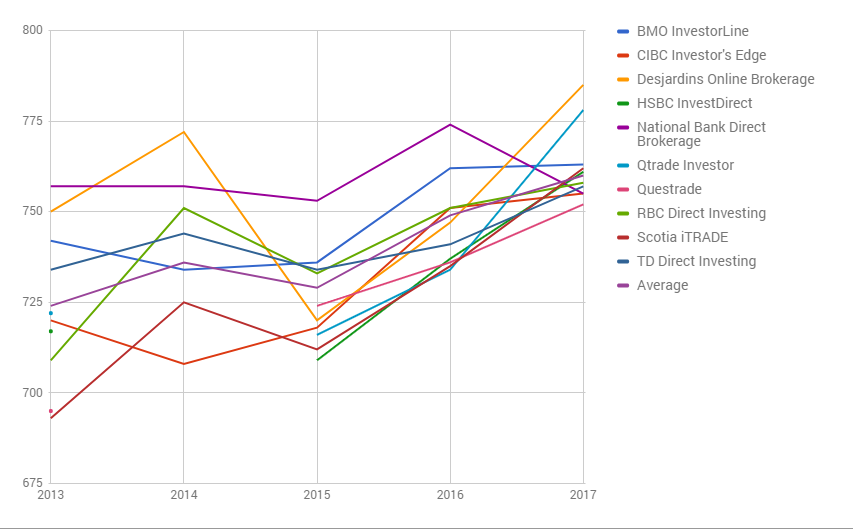 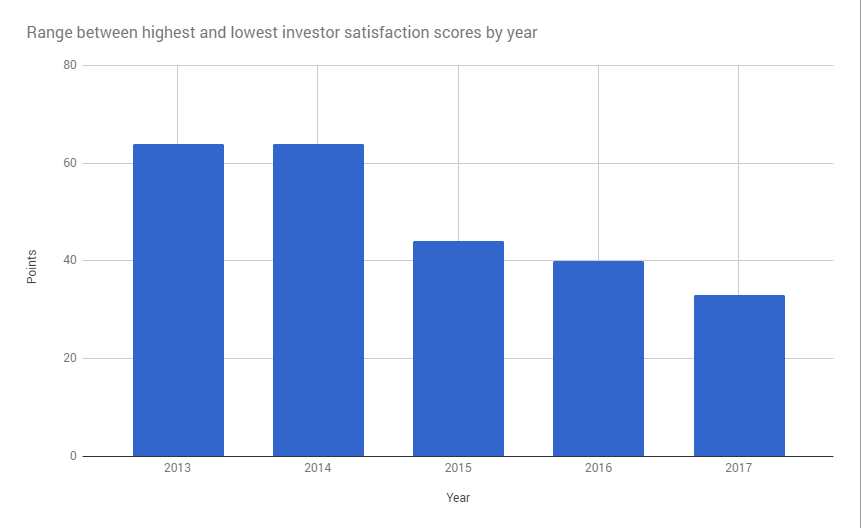 It will be interesting to see how online brokerages in Canada can differentiate themselves enough or create enough perceived value to encourage DIY investors to move assets from one firm to another. One way would certainly be through promotions. Another, however, as National Bank Direct Brokerage has demonstrated, suggests something bolder would be required. The J.D. Power survey of DIY investors was performed between May and June of this year, far in advance of the announcement that all ETFs at NBDB would be able to be traded commission-free. Even so, pricing is just one of a handful of factors that determine the scoring of the investor satisfaction study, so it will be interesting to see what happens in 2018.

Finally, the third very interesting set of insights emerged by taking a long-term view of the Canadian online brokerage ranking data. If it sounds a bit math-y it is, but stick with it as it does provide some neat data.

We expected that firms that would be the most “predictable” or consistent, would have lower variation in satisfaction scores from one year to the next. We measured this by looking at the overall average of scores, and more importantly, at the standard deviation, or variability in the scores across time. Also, we expected that, if an online brokerage is doing a good job of keeping up with investor needs and preferences as measured by the investor satisfaction study criteria, then the scores should also be high.

So, in a nutshell, if the investor satisfaction scores are consistent and high that would make a strong case that the online brokerage is doing a consistently good job of satisfying its clients.

After crunching the numbers back to 2013, National Bank Direct Brokerage emerged as the best combination of strong satisfaction scores and low variation (standard deviation) from year to year. That is certainly a counterpoint to the drop they experienced in 2017 and it highlights the big picture that additional data can provide.

Another very consistent (albeit not as high scoring) firm was TD Direct Investing, which put in a close to average performance every year but whose clients also rated them as such. While it might not seem to be headline worthy, the reality is when it comes to business and investing, predictability is worth something.

It is also worth mentioning BMO InvestorLine in the long-term analysis as they also usually achieved better than average satisfaction scores with better than average consistency and so even though they have not won ‘top prize’ this year, data shows that they are a reliable choice to keep pace with investor needs.

At the other end of the consistency spectrum, firms with higher volatility in satisfaction scores also stood out, but not necessarily in a bad way. 2017 appears as a turnaround year for a pair of firms that have historically underperformed their peers in the investor satisfaction ranking.

The most evident change in performance was with Qtrade Investor, whose track record of scoring below average (going back to 2013) was handily shattered this year as they put in the second highest score (778). Interestingly, Desjardins Online Brokerage owns a significant stake of Qtrade Investor so the connection between these two online brokerages finishing at the top of the ranking may have something to do with these two firms comparing notes. Last week, there was also a piece in the Globe and Mail by Rob Carrick that provided additional context to Qtrade Investor’s strong performance in the Globe and Mail ranking of online brokerages vis a vis the J.D. Power rankings.

The other online brokerage that may be having a turnaround year is Scotia iTRADE. This year’s ranking was the first of the past five years in which Scotia iTRADE managed to score higher than average (albeit by two points). The fact that this was so different than years past is a signal that investor satisfaction with this discount brokerage was more positive in 2017 and is worth watching as they continue to roll out interesting initiatives (such as their social responsible investing tool).

As this analysis shows, there is something to be said for consistency. Unfortunately for many investors, innovation is about change and change comes with risks, so it is a double-edged sword when choosing an online brokerage that isn’t a trail-blazer or choosing one that is.

Even though how investor satisfaction is measured may change over time, everyone can agree that satisfied clients are generally a good thing. Taking the long-view on the most recent set of online brokerage rankings enables consumers to distinguish between who might be having had a unusually good (or bad) year, and who usually has good or bad year(s) when it comes to keeping clients satisfied.

Interestingly, the additional data from this year’s survey shows that providing access to advice, including robo-advice, as well as improving mobile trading experience (and user experience generally) might be areas for Canadian brokerages look to next to put more effort. The good news for DIY investors, however, is that it looks like much of what customers are saying about their online brokerages is good and that (hopefully) expectations of what makes an above average experience have been raised.

The grass may be greener for one online investor looking to move to the big green brokerage. In this post on reddit’s personal finance Canada section, one user asks for some more information about making the switch to TD Direct Investing.

North of the wall

In this post from reddit’s personal finance Canada subreddit, an online investor with a US trading account looks to Canadian DIY investors for suggestions on an online brokerage that is ETF friendly.

Congratulations for making it through a marathon roundup. We kicked things off with a corny pun so here are many more to close out on. Have a great weekend and enjoy a few well-deserved, corny laughs.