For investors, every day in the markets feels like Black Friday. From the opening bell through to the close and into the night, there’s no shortage of folks looking to capitalize on a great deal. Fortunately for DIY investors, there’s at least one place that pulls together the deals and promotions from Canadian discount brokerages to make shopping around much easier (shameless plug much?).

This week’s edition of the roundup continues the deals deep dive, looking at part two of the survey we ran on which discount brokerages Canadian DIY investors are considering when hunting around for deals online. In keeping with tradition we’ll also be serving up a healthy dish of social media chatter from Twitter and what investors had on their minds from DIY investor forums.

Starting first with how many brokerages DIY investors have in mind while shopping. The graph below shows that a large segment of respondents indicated that, by the time they’d made it to the deals & promotions section on SparxTrading.com, they had already short-listed a couple of brokerages. 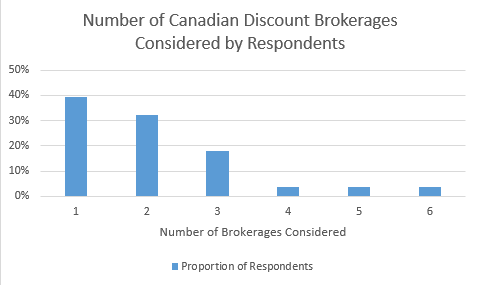 Recall from our previous report that among those visiting the deals and promotions section, there was a significant likelihood that a deal or incentive offer was a part of choosing who to sign up with. Of those who completed the survey, 85% or so were actively in the market for at least one brokerage whereas 15% indicated they were ‘just browsing’ to see what was out there.

For respondents coming through the deals and promotions section, close to 89% of individuals had narrowed the choice down to at least 3 brokerages. Specifically, a large segment of individuals (39%) had one particular brokerage in mind, followed by those who were trying to decide between two brokerages (32%) and three brokerages (18%) respectively.  Although some individuals were really undecided (between four and six choices) this group was relatively small.

With so much data to explore, there were all kinds of interesting insights to be derived. One of those interesting points was that of the 14 Canadian discount brokerages respondents could have chosen from, there were 12 that were mentioned, albeit to varying degrees.

The two brokerages, interestingly, that were not mentioned as being on the minds of respondents while searching through the deals section were HSBC InvestDirect and Jitneytrade. While the latter may only appeal to specialized or professional traders, HSBC InvestDirect’s absence from the response set was curious since they are bank-owned, conduct some marketing and are currently running a promotion. Traffic data through SparxTrading.com also validates this observation that there is an absence of curiousity about HSBC InvestDirect or Jitneytrade to the same degree that exists with other online brokerages.

At the other end of the spectrum, TD Direct Investing appeared to be on the minds of many DIY investors. Whether it is a function of marketing their DIY investor offering more effectively, their size, pricing or total offering, TD’s self-direct investor services appeared to resonate with respondents of the survey. Ironically, those individuals in the deals and promotions section looking for an incentive from TD weren’t going to find anything beyond the standard transfer fee coverage. There are occasional whispers that in-person visits with an eager rep can land clients with a couple (10) of free trades however this incentive is not widely broadcasted.

Interestingly, of the firms that respondents indicated was their only choice while browsing for an online trading account (i.e. their top choice), TD Direct Investing, CIBC Investor’s Edge and Credential Direct do not have advertised offers that most investors would find appealing (e.g. cash back or commission-free trading).

Another interesting angle on the responses provided was in how respondents were shopping for online brokerages. In particular, how many alternatives (if any) are shoppers considering alongside any given online brokerage. Overall, it appears that on average shoppers are considering between one and two options when browsing through the deals section.

The heat map shown below shows the distribution of alternative choices being considered for each online brokerage. 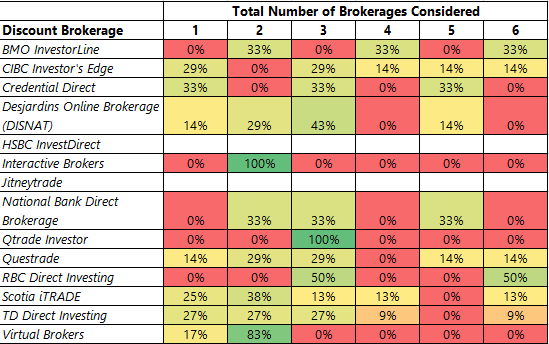 While sample size suggests some caution with the data, there are nonetheless interesting findings where data appeared to cluster.

Another interesting pattern was that Questrade appears to be a strong challenger to bank-owned brokerages. Based on correlation data, Questrade was considered alongside bank-owned brokerages moreso than Interactive Brokers, Qtrade Investor or Virtual Brokers. Another read on that data, however, could be that bank-owned brokerages have successfully managed to change the value perception and have now started to encroach on what has traditionally been the territory of ‘low cost’ brokerages such as Questrade.

Despite their differing profiles, it appears that deal hunters gave particular consideration to either TD Direct Investing or Scotia iTRADE. Curiously, the former does not run as many promotions as the latter while iTRADE has the highest standard commission fee. After Scotia iTRADE, both CIBC Investor’s Edge and, perhaps surprisingly, Desjardins Online Brokerage, also emerged as challengers to TD Direct Investing.

While it may not be surprising to hear that those in the market for an online trading account would likely have a favourite, the data from the survey suggests that certain brokerages are being considered more often than others.

The presence of a deal, in and of itself, doesn’t guarantee that DIY investors will pay attention. Conversely, it doesn’t always take a promotion to get the attention of investors online. That said, given the large portion of those in the market for online brokerage services who narrow down their options to about two providers, an onboarding bonus can certainly give a DIY investor a little more incentive and an online brokerage the edge it needs to win at the margins.

Every so often a little blip on the radar pops up to signal something interesting.

And, speaking of other Canadian discount brokerages mentioned on Twitter, it was a week filled with interesting questions, occasional gripes and the rare shout out for good service. Mentioned in this week’s tweets were BMO InvestorLine, CIBC Investor’s Edge, Questrade, RBC Direct Investing, Scotia iTRADE, TD Direct Investing and Virtual Brokers.

With any product or service hype or marketing comes along with the territory. For one DIY investor, however, this post from reddit’s Personal Finance Canada section shows how they’re trying to get a different side of the story for the BMO InvestorLine experience.

Here’s a question for our time: what happens if you don’t have a phone number? Interestingly, one reddit user from the Personal Finance Canada section created this post since s/he didn’t have a phone number because there’s facebook and google voice apps now. Read on to see how signing up for a Questrade account was a challenge. Nice to see that Questrade also chimed in too!

That’s a wrap on yet another record breaking week in the markets and another head shaking week in politics. Fortunately, there are lots of deals to be found (which some could argue is a sport) as well as actual sports to be enjoyed. Whatever your competition this weekend, best of luck!