With shipping, tripping and champagne sipping, it was another wild week in the markets. There was volatility galore which always makes for exciting times for both traders and the business news media. And, even though this wacky week has come to a close, another very big week is close at hand with ‘Black Friday’ sales and deals already starting to spring up in advance of the infamous shopping weekend. Of course, while many businesses have wised up to the fact that when consumers are out looking for deals, it may be good to start offering them up, Canadian discount brokerages are definitely holding out.

In this special edition of the roundup we take a deep dive into the results from the latest SparxTrading.com survey.  Part one of this report looks at whether or not deals matter to DIY investors and analyzes what Canadian discount brokerages can do in response. From there we’ll take a look at what DIY investors had to day about Canadian brokerages on social media and what got people talking on the forums.

What’s in a deal?

For many years now, Canadian DIY investors looking to invest online have had to figure out how to choose a Canadian discount brokerage from among the dozen or so options out there. To help them with that exercise there have been numerous “rankings” of brokerages and of course, lots and lots of opinions. In addition to winning hearts and minds, winning wallets has been another strategy that several brokerages have attempted to employ in various shapes and forms.

While many Canadian discount brokerages try to figure out what DIY investors are interested in, at SparxTrading.com we were curious about whether or not many of the deals and promotions that Canadian online brokerages are using are appealing and relevant. With 26 advertised deals currently in play, and with some interesting moves by certain players in the market in the past year, we thought it would be interesting to see the degree to which DIY investors are enthusiastic about getting a deal when looking to sign up for an online brokerage account.

Additionally, we were interested in learning about which Canadian discount brokerages DIY investors seemed to be considering while hunting around for a deal. With lots of money that goes into marketing, it was interesting to see whether or not those efforts are paying off with DIY investors.

In part one of this analysis, we review the numbers and the story behind whether or not deals and promotions matter to DIY investors when shopping for an online trading account.

Do deals matter to online investors? 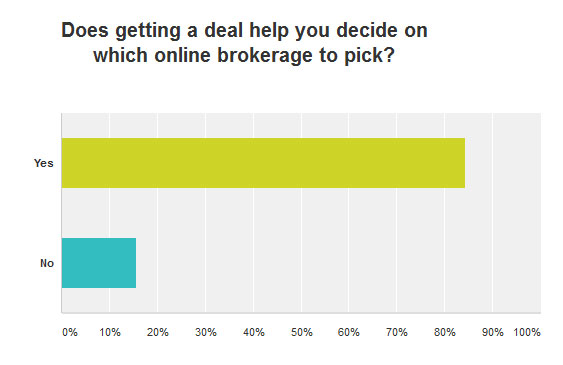 In the data collected by visitors to SparxTrading.com deals & promotions section in the month of October, we found that the overwhelming majority – 84% of visitors who completed the survey – stated that getting a deal helps to determine which online brokerage they ultimately end up selecting.

While it stands to reason that somebody who has made their way to the deals and promotions section would naturally be interested in or curious about a deal or promotion, it is nonetheless a number that warrants consideration. Those that are in the market for an offer or who are deciding between a short list of candidate online brokerages might just use the deal as a deciding factor.

Looking at the breakdown of deals and promotions, there are currently 26 advertised offers from Canadian discount brokerages.  Unpacking that number a bit further shows that not all brokerages are offering the same kind of incentives or promotions. Further, as we reported previously, it shows that there is a disconnect between the offers that the vast majority of DIY investors are looking for and the ones being offered up by brokerages.

Previously we reported that close to two thirds of respondents indicated that cash back promotions were the preferred offer but looking at the deals currently being advertised, only 5 brokerages are offering this to clients. Specifically, BMO InvestorLine, HSBC InvestDirect, Questrade, Scotia iTRADE and Virtual Brokers are offering cash back promotions, however only BMO InvestorLine and HSBC Investdirect do so directly, the remaining firms only offer a cash back incentive via referral offers (which we covered in last week’s roundup).

After cash back offerings, the next most popular were commission credits. These are much more popular for online brokerages to offer because the what consumers pay to execute a trade is not the same as what a brokerage may pay to execute and clear it. Thus getting $100 in trading credits is a win for consumers and a win for brokerages who might only pay a fraction of the face value of the trading commission.

The findings of this survey were quite revealing, in part, because they highlight the gap between what many DIY investors are looking for and what the online brokerage marketplace is prepared to offer. At least at most firms.

DIY investors are constantly looking at and for the next big thing, which means that innovation is always on the minds of investors. So, stepping into trading interface or an online experience that doesn’t convey “innovative” communicates that an online company either doesn’t get it or doesn’t care to. Incentives, such as deals, can help sweeten the deal or focus investors’ attention on price rather than features.

Which online brokerages are DIY investors shopping for?

There’s a saying in marketing, ‘half the money spent on advertising is wasted, we just don’t know which half.’

The results of who online shoppers were looking for certainly got our attention. What they reveal is that marketing dollars or strategies might not be working the way they could at certain online brokerages.

Stay tuned for part 2 of this post in which we report on which Canadian online brokerages DIY investors are actively looking at and which ones they’re looking past.

What can Canadian discount brokerages do?

Data points such as these help to illustrate that the best way to win market share is to listen to the market. Incentive programs are one powerful lever to get individual investors to pay attention or shortlist a brokerage – even to the point of helping to tip the scales in favour of a brokerage. Canadian discount brokerages who aren’t offering a promotion that is widely sought after need to start if they would like to appeal to a broader client base. More specifically, pushing out a cash-back offer appears to be what most DIY investors would find interesting. It should come as no surprise that when it comes to DIY investors, money talks.

Where are brokerages heading next?

Just over a month ago, trading software provider Recognia, organized their 8th Online Broker Summit in Chicago in which many online brokerages from both Canada and the US gathered to discuss trends and developments in the North America online brokerage industry.

One of the major focal points of this summit was on understanding how to navigate the ever changing world of online user experience as well as trends in what DIY investors are looking for.

Below is a quick video highlight reel prepared by Recognia to showcase what online brokerages are thinking about heading into the year ahead.

It was a choppy week in the markets but surprisingly only a handful of DIY investors ran into technical issues. Mentioned this week were Credential Direct, Questrade, Scotia iTRADE, TD Direct Investing and Virtual Brokers.

With the recent surge in marijuana stocks, penny stock chatter has picked up. In this post on reddit’s Personal Finance Canada section, one investor is looking to take a big gamble on penny stocks in a TFSA and is wondering what they need to know before taking the plunge.

A fistful of dollars

Is it possible to get a better trading commission rate at TD Direct Investing? One user on reddit seemed to suggest it’s possible in this post however there are some important caveats pointed out by other readers.

That’s is for another crazy week. 2016 still has a few weeks left in it but by the looks of things it won’t be going quietly. For those in need of some laughter as a break to the week that was, here are some hashtags from Twitter that will give you a chuckle. Have a great weekend!