For Isaac Newton a falling apple sparked inspiration about gravity. For traders and investors this week, Apple defied gravity and seemed to spark a rally in a falling market. The lesson seems to be clear: don’t fight the obvious. Markets for DIY investing are clearly giving signals to Canadian discount brokerages and this week it was interesting to see which brokerages are making moves to be on the right side of the next big thing.

In this edition of the roundup, we review the deals that drew one bank-owned brokerage off the sidelines and into the promo mix once more. Next we analyze some interesting research done on the Canadian robo-advisor marketplace and what that means for discount brokerages and robo-advisors alike. Following that we’ll take a quick scan of other news from Canadian discount brokers and then move onto the chatter on social media and investor forums.

This past week, Scotia iTRADE got back on the discount brokerage deals & promotions wagon by launching a pair of offers at DIY investors.

Always looking for creative (read: cost effective) ways to bring new clientele on board, the offers put forward are “free trades” or a combination of free trades and SCENE points, the reward program that offers collectors free movies. Rather than doling out cash or gadgets, this strategy can help keep iTRADE’s cost of bringing on a new client to a minimum.

Scotia iTRADE is not alone in their use of points programs as an incentive to attract clients. RBC Direct Investing has recently started to ramp up its marketing of being able to use points towards trading commissions and CIBC Investor’s Edge also has a points for trading commissions offer.

For iTRADE in particular, however, the appetite for DIY investors to be drawn in by the prospect of free trades, free movies or discounts at Swiss Chalet (one of several CARA owned restaurant chains which SCENE points can be used at) might be limited. Nonetheless if Scotia iTRADE is high on a DIY investor’s list of possible choices, some free trades with a side of fries is a bonus.

In both the deals, it is interesting to see that Scotia iTRADE is inviting users to get an offer code even though the offer code is actually in the terms and conditions (which investors should be reading!). This is something that other brokerages, such as Questrade and Virtual Brokers, have also done in order to capture prospective client information when pitching a deal.

As we have observed already this month, September is shaping up to be a busier month across many discount brokerages. These latest offers from Scotia iTRADE last well into the latter part of the fall, so it will be interesting to see how other discount brokerages step up and challenge a crowded deals pool.

Their robo-advisor research report takes a comprehensive look at the already crowded robo-advisor industry in Canada. Data from the report was gathered from a series of mystery shops in which clients were asked to document the process of opening an account. The details of this interaction were thoroughly analysed and an interesting portrait of the Canadian robo-advisor space emerged.

A series of articles have already been published about the report including one by Jonathan Chevreau of FindependenceHub.com and the other by Rudy Luukko for Morningstar Canada signalling that there is a great deal of curiousity about whether or not robo-advisor firms are measuring up to the hype that surrounds the robo-advisor model.

Chevreau’s piece is particularly interesting because it contains reactions to the report from senior executives at robo-advisors profiled in the report whereas Luukko’s article looks at some of the key findings of the report in detail, concluding that Canadian robo-advisors still have some ways to go in the service department before they live up to the hype.

What’s clear from the DALBAR robo-advisor report is that there is still quite a bit that the “fintech” firms have to get right. Having a ‘robot’ manage your money is supposed to make things less emotional – which DALBAR’s Quantitative Analysis of Investor Behavior would endorse. That said, the relationship people have with their money, and more importantly with who is handling it, are what will ultimately define the success of the digital advice movement.

Highlights from across Social Media

This weekend the MoneyShow rolls into Toronto. Featuring a who’s who lineup of speakers on personal finance, the show is sure to attract the attention of investors, many of whom are inundated with stories of Canadian real estate, falling oil prices and the upcoming US election.

Among the exhibitors at this year’s show are a number of Canadian discount brokerages. Here are some snapshots of the National Bank Direct Brokerage team and Virtual Brokers’ outreach team at the show. 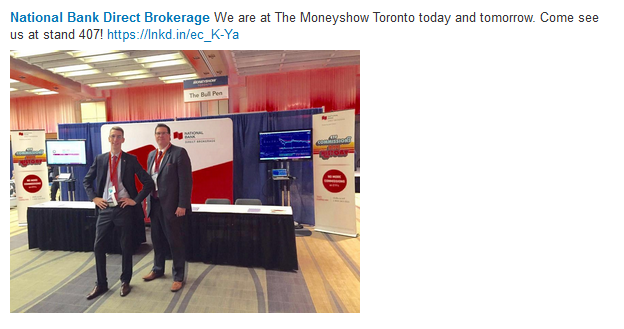 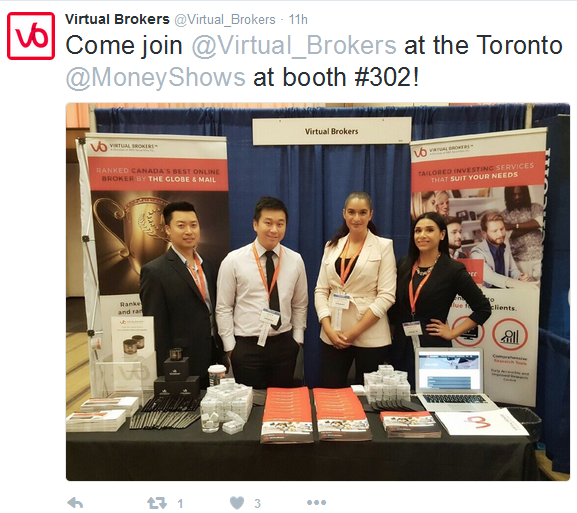 Aaaand we couldn’t let this one sneak by – every seasoned trader has done the wrong ticker (aka fat finger) trade before – apparently it happens to social media folks too! 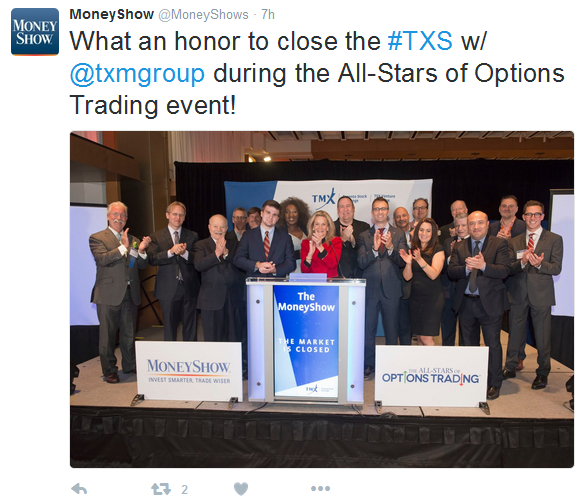 We also learned from Twitter this week that Virtual Brokers was hanging out at the University of Toronto downtown campus, likely to pitch their Kick-start investment program to students who are now thinking about their lives as adults.

Finally, the team at Questrade shared an article interesting article written about them in Canadian Business Week which chronicles some of the backstory to the company and how far they’ve managed to evolve since their launch in 1999.

Despite the positive coverage received in the Globe and Mail, it’s not often that forum chatter turns to Qtrade Investor. That might be changing, however, thanks to their young investor pricing change and the fact that many of the folks who frequent the forums are themselves younger investors. In this post from Canadian Money Forum there are a handful of interesting reports about what people think about Qtrade Investor.

It’s not a common comparison, which is why this post (from reddit’s Personal Finance Canada subreddit) about choosing between two bank-owned brokerages caught our attention. An interesting mix of opinions worth a read for those considering either provider.

That’s a wrap on another wild week. Fall is just around the corner so enjoy the last few official days of the summer!