A famous football movie said sometimes life is a game of inches. As the busy season for investors and brokerages kicks off, it looks like there are lots of interesting changes, big and small, that are taking place in and around the brokerage industry, to win over new clients. From growing a client base to new leadership to new products or services, this week has a little bit of everything thrown in.

On the docket this week, we’ll take a look at a lot of little developments across the board. Starting first with stats from one independent discount brokerage that shows they’re making strides with investors. Next we highlight one online brokerage that’s looking for a new vision and some leadership and what that reveals about their plans for the future. After that, we’ve got a new trading app launched from one Canadian brokerage who’s doubling down on mobile trading. From there we’ll take a look at the latest pitch being made to millennial investors and whether it’s a hit or a miss. And finally we’ll recap what DIY investors were chatting about on social media and in the investor forums.

The stat sheet from Interactive Brokers’ August trading figures paints an interesting picture of the landscape for online brokerages. On the one hand, it looks like trading volume has significantly diminished compared to last year at the same time. A drop off of 22% on a year over year basis as well as a 4% decline compared to July’s figures suggests the volatility picture is very different this year than last. On the other hand, metrics such as margin loan balances, credit balances and most notably client accounts all continue to show growth compared to last year and last month.

What does it take to be the president of a Canadian online brokerage? It is an interesting question that was prompted by the recent online posting for a new president at BMO InvestorLine.

Longtime observers of the Canadian online brokerage space will note that senior leadership in the online brokerage space tends to have quite a bit of turnover. Within the past several years, however, BMO InvestorLine in particular has seen a number of individuals take the helm and so it is interesting to be able to take a look at what they’re hoping to bring in.

Aside from the expected components of being a solid leader, there appears to be a trend towards becoming increasingly technologically proficient and to a degree, prescient. To be able to craft a strategy for 3 to 5 years into the future takes a certain comfort level with seeing the big picture for the self-directed investing industry but also being able to track where and how technology will evolve for consumers who also happen to be investors, which is no easy ask.

To that end, it is telling that a core component to the strategy of BMO InvestorLine is to try to become a “technology leader”.

Ironically, this exchange on Twitter (also shown below) that happened just a few days ago showcases the jumping off point the new President is working from. This certainly suggests that there are some hearts, minds and browsers that need some adjusting before “technology leader” springs to mind for many DIY investors when thinking of BMO InvestorLine.

Regardless of who lands in the driver’s seat next, we’re happy to extend an invite to the BMO InvestorLine team (some of whom are regular readers of the roundup) or the future president to drop us a line if you’re interested in achieving some of your strategic objectives.

On the technology theme, earlier this month Desjardins Online Brokerage released a new app for its Disnat Classic clients on both iOS and Android.

The new mobile trading app adds another way in which to access the Desjardins Online Brokerage or Disnat online trading experience since there is already a mobile site that enables DIY investors to perform the essential functions of trading online.

Some key features of the app include streamlined account summaries, clean charting and an easy to use interface for placing orders or checking their status.

In terms of response, the early ratings in the respective app stores appears to be positive. With a user interface that appears modern and in line with better practices, users have given the app close to a 4.5 out 5-star rating on Android and 3.5 star rating for iOS – the new mobile experience has managed to score high praise (albeit with a small number of reviews) compared to other online brokerage mobile apps.

Active traders who use the Disnat Direct platform, however, are out of luck for the moment. Nevertheless, it appears that evolving the online user experience, especially on mobile, is definitely now on the radar and task list of the team at Desjardins Online Brokerage.

In a news release yesterday, TD Direct Investing shared some interesting data on what millennials seem to think about DIY investing.

The data, derived from a survey of about 1750 “millennials” which took place between February and March of this year, suggested that a lack of money and know-how were the key barriers to getting started with investing. Also, given the insane volatility at the time, it shows that timing market surveys on the stock market is also a tricky gig – but we digress.

According to TD Direct Investing, there are 3 tips (labelled the “ABC”) which they are hoping might inspire some younger investors to look more closely at the DIY investing world: 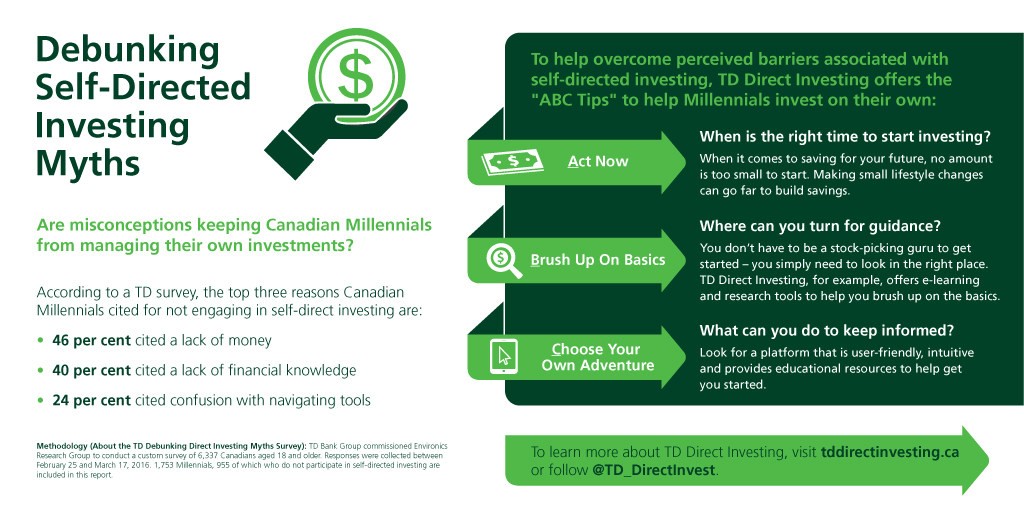 The nudge towards considering DIY investing comes at an interesting time for the wealth management landscape.

An increasing number of ‘millennial’ investors are being courted by and turning to robo-advisors, the digital wealth management solution that can cut out the tasks of having to act, learn or choose. Showcasing the benefits of DIY investing over and above the robo-advisor route won’t be an easy sell.

Robo’s aren’t the only challenge for Canada’s largest online brokerage either. It looks like they’re increasingly being surrounded by programs or promotions aimed squarely at the same audience they’re hoping to reach.

Last week we reported on Qtrade Investor launching a young investor pricing program as well as highlighting several other initiatives from online brokerages that are directly targeting ‘younger’ (aka millennial) investors.

In TD Direct Investing’s case, this press release might be the signal that they’re preparing to respond more emphatically to the changes going on in the DIY investing space, which should be an interesting set of adventures for all.

On a short week it may have been a week to be short. Either way clients chimed in about some of the issues on their minds. Mentioned this week were BMO InvestorLine, Questrade, Scotia iTRADE and TD Direct Investing.

Well this is a new one. This post on reddit from one supposed bank-owned brokerage employee provides an interesting window into a) airing grievances about a job to the world and b) what happens with your trading accounts when you start working in the industry. Fascinating stuff.

Crowdsourcing financial advice seems like an interesting approach to money management however it’s clearly a sign of the times. On this post from the Personal Finance Canada subreddit, one keen would-be investor wanted to know what the best route forward would be to deploy the hard earned cash.

That’s a wrap for this week’s roundup. Coming off the long weekend last weekend, it’s nice to have this one show up a little sooner. For sports fans, it’s a great weekend with football back on the timetable north and south of the border, the Paralympics in Rio and hockey back in focus. Also it’s a welcome distraction from the nuttiness that was today’s trading day – and speaking of distractions, this post on Facebook should hopefully provide a welcomed dose of the chuckles. Have a great weekend!