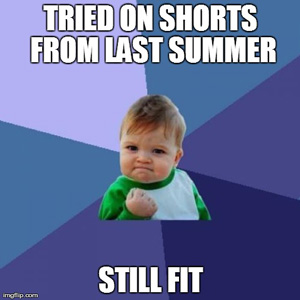 Like some kind of odd celestial alignment, the convergence of shorts weather on a short work week just as the S&P 500 hits a new high and causes yet another squeeze on the shorts. Yup, seems like shorts are the theme for this week’s roundup, and as such, this discount brokerage roundup will try to, um, keep it short.

In this edition of the roundup we take a look at the latest deal launched by one bank-owned online brokerage and why it might be a signal for the upcoming summer discount brokerage deals season. Next we gaze into the tea leaves with some interesting signals from one brokerage’s activity patterns as well as look at one looming threat to brokerages that may turn out to be more sizzle than steak. We’ll also take a look at what the chatter about discount brokerages was like on social media with our new #TweetsOfTheWeek. Finally we’ll take a look at the upcoming investor education events and some very interesting chatter from the investor forums.

Cash (or Free Trade) Me if You Can

Just in time for summer, Scotia iTrade has resurrected their 1,000 free trade/$1,000 cash back offer once again albeit with several twists.

When it first launched in January of 2015, it was the only offer that offered a specific promotion for deposits over $500,000 as well as the largest headline number for a cash back or free trade promotion. At the time the offer consisted of either cash back or commission free trades, and included a trial of the Scotia iTrade platform FlightDesk.

In its latest incarnation, the $1,000 cash back or 1,000 free trade offer now includes a 6 month subscription to the US based KeeneOnTheMarket.com trade alert service for individuals who deposit more than $100,000. As was the case in January, it appears that Scotia iTrade is looking to distinguish its promotions from other brokerages with bigger, bolder numbers of deposits sizes, free trades or cash back and now a stockpicker’s subscription service.

Interestingly, through the remainder of May, they will have several concurrent offers which could offer deal hunters a narrow window to pick the best one of the bunch.

Another noteworthy component to the latest deal from Scotia iTrade is that the offer expires well into September. Many other offers from bank-owned brokerages aren’t set to go that long but it looks like Scotia iTrade has firmly placed their bets on this flagship offer for the rest of the summer.

Finally, there is clearly an interesting spin on this offer that is geared towards active traders of US equities/options. Scotia iTrade continues to court this highly prized segment with their $4.99 active trader commission pricing, platform, service offering and now promotions.

It will be interesting to see if any other bank-owned online brokerage steps up to challenge Scotia iTrade in the active trader segment. The recent fee hikes from the major Canadian banks likely saw long-term investment accounts take some collateral damage with disgruntled clients jumping ship. The priority will likely therefore be on winning back those clients with incentives rather than chasing active traders. Whatever the case, Scotia iTrade has opted step into summer swinging with big headlines that other bank-owned brokerages will have to seriously ante up to beat. Should be an interesting summer.

Between the major news announcements, there are always some minor blips on the radar that indicate that the Canadian online brokerages are working away on something.

One bank-owned brokerage in particular seems to be finding its way back on to the radar more regularly. CIBC Investor’s Edge has been mentioned several times in recent roundups and stories for rolling out new pricing, promotions and seminars this year – something that was distinctly different from most of 2014. This past week they have yet again changed their homepage imaging and seized upon a timely trend by pitching visitors to their website the benefits of TFSA – something that up until now only Questrade had really picked up the ball on.

While it is still early, it appears that there is a trend amongst Canadian discount brokerages to increasingly focus on the content and design of their sites.

Recently CIBC Investor’s Edge and BMO InvestorLine have been building their respective benches in these areas by looking to hire designers and user experience specialists. BMO InvestorLine recently rolled out their new website front-end along with Desjardins Online Brokerage earlier this year and we’ve had confirmation from several other brokerages they are poised to do the same within the next 6 months. CIBC Investor’s Edge looks like they might be gearing up for some substantial design changes in the not too distant future.

CIBC Investor’s Edge bold commission pricing drop has put them back into minds of many DIY investors as well as their competitors, however their most recent maneuvers might signal that competition on user experience between bank-owned brokerages is going to get even hotter.

For many DIY investors, the recent spike in attention given to robo-advisors has got more than a few feathers ruffled.

In an interesting story from International Adviser, however, one of the groups singled out as being threatened by the robo-advisor trend may breathe a sigh of relief. The reason: profitability.

While there has been lots of interest on the part of retail investors in these robo-advisors, the article points out the numerous challenges to successfully growing to scale where they can threaten the discount brokerage space. The point, as it is in many industries, is that only the strong will end up surviving. It’s a familiar refrain for discount brokerages who know all too well that success hinges on having a critical mass of clients AND being able to stick out from their competitors. For robo-advisors, the fight is only just beginning and it’s likely to expect discount brokerages won’t be letting them advance unchallenged for much longer.

This week it looks like Twitter users from Questrade were again having trouble sourcing stocks to short. Given that certain markets are pushing all-time highs, it’s interesting to see a) that so many traders are attempting shorts and b) that Questrade users are encountering challenges shorting. While tweets to and from Questrade dominated the news feed, one user vented about the customer service experience at Virtual Brokers – something that has also been getting attention from other users posting to our forum.

There are many reasons individuals may decide to open multiple accounts with discount brokerages. Chief among them are risk management (think eggs in baskets), CIPF protection and special features, one of the drawbacks is keeping them all straight. In this post from the financial wisdom forum, it was pretty interesting to see just how many discount brokerage and banking accounts certain individuals admitted to using.

It’s becoming trickier for smaller, inactive investors to park their money at a discount brokerage. In this post from Red Flag Deals, the inactivity fee took one investor at Qtrade by surprise. Check out what the community had to say about their options.

That’s a wrap for this week. Remember that US markets will be closed on Monday for Memorial Day so for the US traders it will be a short week. Wherever you happen to be this weekend, hopefully you are blessed with great weather or some wildly entertaining stuff to watch. To help launch you into the weekend on a high note, here’s more great footage of people flying – a Canadian in shorts no less!