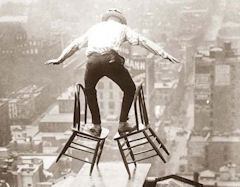 If there’s one fear that doesn’t seem to be present in the market, it appears to be a fear of heights. Once again markets are touching new highs and venturing into uncharted territory – but they weren’t the only ones.

In this edition of the roundup, we cover quite a bit of ground starting with a pair of “growth-oriented” investor conferences that took place in Vancouver. Next we check out a couple of recently launched discount brokerage promotions and contests. Following that we report on an interesting level of hiring activity by different brokerages. Finally we end with a selection of thoughts from other Canadian investors via the investor forums & message boards.

The first was the new medical-marijuana focused Green Rush conference. According to reports, it was surprisingly well attended for a new conference and it drew in those curious about the potential ‘pot-of-gold’ at the end of the medical marijuana rainbow. Whether or not investors will see the green in their portfolios at this point is still too early to tell, but the speculators were out sniffing around.

Another growth themed conference took place a short distance away – this one with a focus on small cap companies. The spring edition of the Vancouver Small Cap conference showcased several guest speakers along with small cap company presentations. As with conferences past, there were a number of interesting tips and perspectives on a segment of the market that is typically classified as ‘high risk’. Read our full review of the Vancouver Small Cap Conference for more information.

ETF Contest on the Horizon

Horizon’s Exchange Traded Funds (ETFs) in partnership with National Bank Direct Brokerage are once again running their Biggest Winner contest. The contest runs from market open on May 20th to market close on June 27, 2014.

This year the prizes consist of $500 cash weekly for the 6 week duration of the contest, a grand prize of $7500 at the end of the competition and a runner up prize of $2500. The grand prize will be awarded to the portfolio that has the highest account value at the end of the competition. The weekly prizes will be awarded to the individual with the highest percentage gain. For full details on the contest or to register, click here.

According to the following forum post via the Financial Wisdom Forum, BMO InvestorLine has another cash back promotion running (not advertised on the front-end of their website) geared towards investors depositing either $250,000-$499,999 or $500,000+. The promotion offers either $700 or $1500 cash back depending on the deposit size. Full details on the promotion are available here.

BMO InvestorLine was also busy this week announcing updates to its adviceDirect service. Specifically a number of additional updates were released that focus around personalized ETF buy and sell recommendations and an improved ability to personalize recommendations with sorting functions.

Another interesting nugget from the investor forums came from a Questrade representative posting on the RedFlagDeals forum. Specifically, the rep let readers know that bracket orders would soon be launched by Questrade as part of the new release of the IQ platform. Traders on advanced platforms such as TD Direct Investing’s ThinkOrSwim (aka the US Trading Platform) and Active Trader platforms, or Interactive Brokers’ TWS have been able to take advantage of bracket orders (aka conditional orders or One Cancels the Other orders).

With Questrade now providing the feature it will be an interesting selling point for their platform. There are other online brokerages (who unfortunately cannot be named at this point) who are also currently working on the implementation of bracket orders.

Two points a trend does not make. That said, there seems to have been a slightly greater than usual spike in the number of job postings coming from Canadian discount brokerages.

In a recent roundup we covered the launch of Questrade’s new careers twitter handle and in these past two weeks there have been a number of postings for sales reps and client reps.

While it is difficult to pin down exactly what is prompting the timing, hiring more staff to either service or “onboard”new clients is a sign that several brokerages are not sitting back when it comes to looking for new business.

Among the brokerages with recent hiring posts:

Activity across the forums looks like it pulled back a bit – perhaps on account of the nicer weather pulling folks away from the screens and into the better weather. This week’s selection comes from the RedFlagDeals forum as well as from the Canadian personal finance section of Reddit.

Comparing the two low cost online brokerages is a popular source of discussion – here is yet another interesting thread comparing them both.

As we pointed out last roundup, seeking out advice from Reddit can be a hit or miss proposition. Nonetheless a thread that crossed our radar (which can be found here) was from a user looking to find the best brokerage for a “casual investor”. The responses of users were interesting and it was also noteworthy to see that even on Reddit, folks are prone to having multiple brokerage accounts.

That does it for this week’s roundup. We wish all the moms of the bulls and bears out there a wonderful Mother’s Day. For those brave enough to be looking for a Mother’s Day themed investment or three, this interesting segment from CNBC might provide a few ideas other than flowers: