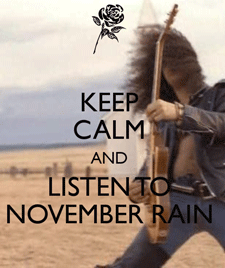 Well when it rains in the discount brokerage world, it certainly pours. Fitting for November.  This week’s roundup looks back on a busy week filled with a major discount brokerage ranking being released, a very cool (and geeky) way to learn about options pricing as well as a frenzy of conversation about discount brokerages from the forums. It’s a full card so this roundup is 2 pages long – be sure to check out the ending for some sage ‘market wisdom’ courtesy of Guns N’ Roses.

After a lot anticipation, the 2013 Online Broker Rankings were finally released this past week by the Globe and Mail’s Rob Carrick.  This year the online broker rankings went back to the ‘report card’ style evaluation of 12 Canadian discount brokerages, with each broker receiving letter grades rather than percentages.  In line with the past few evaluations (learn more about the historical online brokerage rankings here) the key criteria being measured were:

While getting called a cheap option by one of Canada’s largest newspapers may not seem flattering, for a discount brokerage in the midst of a price war the label is a badge of honour. The brokerage with the best overall ranking (and ‘cheapest broker’) for 2013 was Virtual Brokers (overall grade: A) for the second year in a row. The first runner up was Qtrade (overall grade: B+).

Despite being tied for third with RBC Direct Investing and Scotia iTrade, BMO InvestorLine was described as “the best bank-owned” online brokerage (each of these bank-owned online brokerages scored a B overall).  The media team at BMO published a release celebrating the claim. Incidentally, Questrade also received an overall grade of “B”.   The worst overall score received this year was a “D” and it was given to HSBC InvestDirect along with some pointed remarks about their offering.