At the official halfway point in November, it seems like this month is poised to disappear faster than a message from (the now multibillion dollar valued company) SnapChat.  While the tech space looks like its poised for a bidding war, the discount brokerage space looks like it’s in for quite the price war.

In this week’s discount brokerage roundup, we’ll take a look at the ultra-low commission prices announced this week from one discount brokerage that are bound to make a big splash in the discount brokerage pool. Next, we’ll review a pair of contests from two different brokerages that reflect some of the more creative ways brokerages are trying to get the attention of retail investors.  Finally, there are a couple of interesting forum threads that shed light on starting out with investing as well as what to do with a modest portfolio.

Take a Penny, Leave a Penny

This past week, Virtual Brokers announced a price reduction in their already low trading commission that is sure to cause a stir with other Canadian discount brokerages as well as with investors looking to save on trading.  Virtual Brokers has now officially replaced their infamous “The 99” commission plan (which had a minimum of $0.99/trade) with “The Penny” plan which now sets the minimum amount a client can pay at $0.01 per trade.
The offer itself is a combination of clever marketing as well as aggressively low pricing.  Essentially the new “The Penny” plan from Virtual Brokers is the same as “The 99” except that the minimum charge is $0.01.  While several other brokerages have $0.01/share offers (most notably Questrade) the minimum charge per trade is higher than the new Virtual Brokers offer.   In an upcoming article, the new penny plan is detailed along with the other services announced in the news release – a new automatic savings program (Kickstart Investment Program) and a novel Direct Purchase Plan (DPP). In the meantime, there are a number of important details for individuals to pay attention to when considering Virtual Brokers’ new offer – such as the fact that pricing applies to trades made via the VB Webtrader platform.  For more details on “The Penny” plan, click here.

When it comes to running contests and promos for investors, Questrade is one of the most active discount brokerages.  This past week, they launched their latest contest on social media (Twitter &  Facebook) for football fans to tell them which fantasy trade either the Buffalo Bills or Atlanta Falcons should make to land them in the playoffs. The prize for this contest is a pair of VIP tickets to the NFL game in Toronto on December 1st between – you guessed it, the Buffalo Bills and the Atlanta Falcons. For more info on the contest, click here.

Just as one contest begins though, another big discount brokerage contest is wrapping up. National Direct Brokerage’s “Biggest Winner” officially wrapped up today bringing to an end several weeks of stiff trading competition.  Up for grabs were weekly prizes of $500 for best weekly portfolio performance and a top prize of $7500 for best overall performance and second prize of $2500.

Getting Started with Investing

A perennial favourite, how to get started with trading or investing  is one topic that always offers the chance to see how more seasoned investors answer tackle that question. In this post on Canadian Money Forum, the user ‘Nasha’ is a twenty-something looking to learn more about how and where to start on the investing journey. Check out what the forum members had to provide in terms of their own experience and guidance. 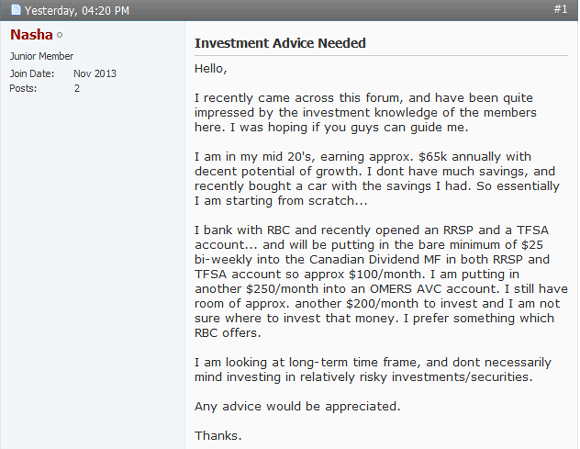 What Would You Do with $2K at Questrade?

Every portfolio has to start somewhere. For those with modest portfolios or who are just starting out, low cost discount brokerages offer an attractive opportunity to participate in the markets without eating up significant amounts in trading commission costs.  That said, how to get started with a modest portfolio size while also being prudent with managing risk poses a problem raised in the following post on Canadian Money Forum.  The user “swoop_ds” provides a few of the options being considered with what to do with $2000 in a recently opened Questrade account. Find out what trading ideas the rest of the crowd had here. 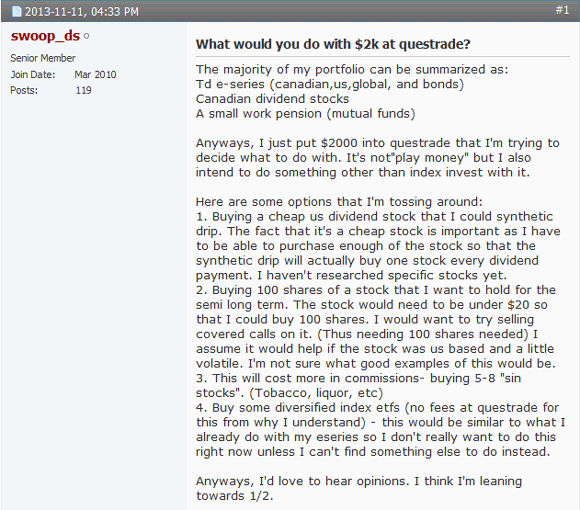 That’s it for this edition of the roundup. Have a great weekend!