As hard as it is to believe, September is almost over and with it there was some major news this past week in the discount brokerage space.  In this edition of the roundup, I look at the big news in discount brokerage rankings that was announced earlier in the week as well as highlight what month end means for some deals.  Also included in the roundup are some interesting events spotted taking place at a major brokerage and some informative posts in the investor forums.

Earlier this week JD Power & Associates released the results from their annual investor satisfaction survey and the discount brokerage rankings that go with them.  This year’s winner was National Bank Direct Brokerage who narrowly edged out the reigning winner Disnat.   Some highlights from this year’s investor satisfaction survey were that the overall average satisfaction for the Canadian discount brokerage industry rose to 724 (out of 1000) up from 700 a year earlier.  While the rankings did cover most of the Canadian discount brokerages, there were a couple of popular brokerages (Virtual Brokers, Credential Direct and Interactive Brokers) that just didn’t have enough of a sample to be included.

To learn more about how the JD Power & Associates discount brokerage rankings work, check out the special series explaining this award.   Also coming up shortly is an in-depth look at the award results for 2013 as well as commentary from National Bank Direct Brokerage on the win.

So You Think You Can Trade?

National Bank Direct Brokerage has also been busy on the contest front.  In partnership with Horizons Exchange Traded Funds, National Bank Direct Brokerage is sponsoring the Horizons ETFs Biggest Winner Contest.  The simulated ETF trading competition awards cash prizes to those whose ETF portfolios outperform other competitors.   The contest has a grand prize of $7500, second prize of $2500.00 and weekly prizes of $500.   The competition starts on October 7th, 2013 and runs until November 15th. For more information about the competition check this link.

Earlier this week, one of the major bank-owned discount brokerages, RBC Direct Investing, revived their investor education seminar series by holding some introductory sessions at their investor centers in Vancouver and Toronto. This article goes over what the event was like and what attendees can expect if they wish to attend.

As we near the end of the month there a couple of discount brokerage deals are set to expire.  Scotia iTrade’s “Refer-a-Friend” offer is scheduled to expire at the end of September however on several occasions in the past this has been extended at the beginning of the next month.

Another notable deal expiring at the end of September is BMO InvestorLine’s Air Miles/$250 cash back offer. With the recent launch of deals by RBC Direct Investing, HSBC InvestDirect and the extensions of deals by a number of other brokerages earlier in the month, it will be interesting to see what BMO InvestorLine decides to roll out through next week as this is their major promotional offer currently being advertised. Although it was originally set to expire in early September, the expiry date for the “AirMiles/Cash Back” deal got pushed out until the end of the month so it will be interesting to spot what, if any deals will be announced.

In the RedFlagDeals forums this past week there was an interesting post spotted that discussed how dividends are treated while trading on margin.  Specifically, the answer to the following post by user Mark77 indicates that rules about where a dividend originates can determine how they get classified. 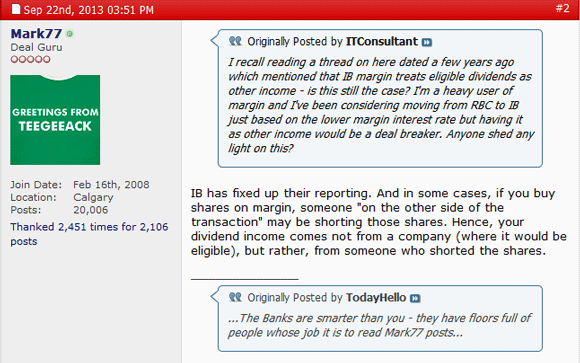