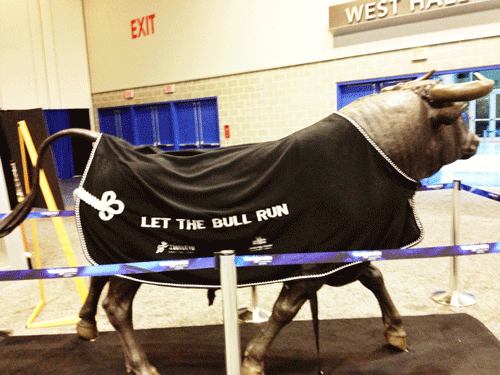 This year’s World Resource Investment Conference (WRIC) in Vancouver came a bit earlier in the calendar than last year’s conference against the backdrop of a mining and exploration market fraught with pain and nervousness. In the mining sector, hope seems to be the rare commodity everyone is looking for these days.

The two-day WRIC featured the standard recipe of resource companies exhibiting and presenting, familiar speakers from Cambridge House conferences past and of course, the big bull.   Unlike previous conferences, however, this year’s WRIC felt like a much smaller show.  Attendance figures showed that close to 3700 individuals attended the conference this year which is down considerably from 2012.

Speakers and exhibitors also pointed out the smaller crowds this time around. One of the more popular speakers often present at Cambridge House shows, Danielle Park, remarked that the small numbers of attendees at this past conference are a far cry from the height of investor fervor during 2007.   As a follow up to that statement, however, she pointed out that fewer investors in the conference may actually be a healthy albeit contrarian indicator that the business cycle in junior mining and exploration stocks is working itself out.

From many of the talks, the sentiment appears to have shifted from denial of bad news to acceptance. As any seasoned investor knows, when it sounds like other investors are throwing in the proverbial towel, it is probably a good time to start looking over the merchandise to see what might go on sale.

Despite the widely acknowledged doom and gloom, there were a number of bright spots throughout the conference.  For attendees, this year’s speakers offered a great mixture of colourful analysis and opinion. In particular, the closing panels on both days saw spirited debates about the future of venture capital funding for junior companies (day 1) and an especially fiery closing panel on the world outlook (day 2) that saw outspoken personalities Rick Rule and Danielle Park exchange clever quips across the panel table, some of which landed on Marin Katusa who was seated between them.

Also spotted at the conference were a couple of the usual discount brokerage suspects, TD Direct Investing as well as Disnat.  What was particularly noteworthy was the promotion by TD Direct Investing that has yet to be widely launched. They have jumped into the ‘free trades’ game and will be offering up to 50 free trades to new clients between now and mid-July.  Check out our deals section here to find out more.   Disnat was also offering an ‘unadvertised’ deal which was being offered during their SCATE tour. The big lures for the Disnat deal are a 1 year subscription to Tyler Bollhorn’s daily alert newsletter and $300 in commission rebates. For more details on this deal, click here.

Other interesting bright spots included the Rocks to Riches course preview in which attendees could learn about some of the important concepts within geology by doing some hands on (experiential) learning.  This course is likely going to be offered in January 2014 at the Vancouver Resource Investment Conference. For more information on it, click here. 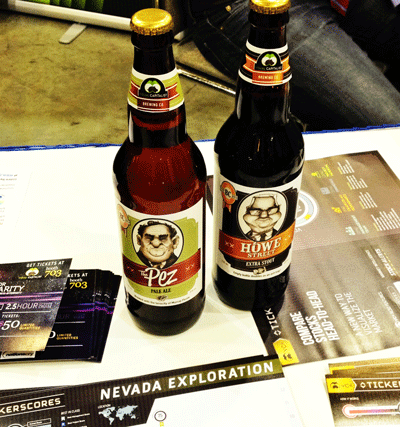 Lastly, Visual Capitalist, an innovative Vancouver communications firm that creates fun and informative infographics (and apparently craft beer too) on a number of commodity and mining-related topics , is launching the beta-test of their new mining and exploration company comparison tool: TickerScores.  This tool aims to tackle making the difficult process of scanning and researching mining and exploration stocks much more intuitive and far less time-consuming.  To learn more about this neat tool, check out the link here.

The upcoming summer months will provide many answers to the predictions made by the analysts and experts at this conference as to the fate of many cash-strapped junior companies.  This lines up nicely with the timing of the last of the Cambridge House conferences in Canada in 2013, the Toronto Resource Investment Conference to be held in September.  Of course, for those investors and companies hoping for a market bottom, how they manage to stomach these next few months will be worth hearing about in September.