For frequent market watchers, a screen is hard to ignore. Information about COVID-19 is flying at investors faster than a souped up Vin Diesel muscle car and coupled with, or perhaps compounded by, stock market volatility means it is hard to know exactly how to navigate the unfolding economic, medical and societal crises. Of course, channeling a little Vin Diesel at this moment means having a steady hand at the wheel, being ready to shift gears and having some strong clichés at the ready.

In this edition of the Weekly Roundup, we drive into a story of how investors who move fast also get furious when systems can’t keep up. Staying on theme, we also look at how one big online brokerage got sanctioned for skirting the rules. As usual, we wave the checkered flag with comments from Twitter and the investor forums. Buckle up!

With markets trying to digest, model and value multiple shocks to the economy, it is no wonder that volatility and uncertainty are at all-time highs. And while many investors are rightfully afraid and panicked by the current market whipsaws, there are nonetheless certain investors piling into the markets in hopes of either making fast money or picking up assets at shockingly low prices.

Although there is no one reliable indicator of a market bottom, one of the requisite ingredients for stocks to reverse fall in price is buyers. And, this is no way to call how the market floor is forming; however, the evidence from multiple online discount brokerages appears to indicate that there is a strong flow of DIY investors who are opening online brokerage accounts on both sides of the border.

A scan through recent Twitter threads and synthesis of news stories reveal that, among the complaints logged in the current market conditions, DIY investors are encountering issues with account opening, funding and getting started. Having tracked the Canadian online brokerage industry for the better part of 8 years now, when complaints about getting an account opened begin to show up on social media, it generally points to FOMO – or fear of missing out – kicking in.

A second line of data that might also be indicative of the activity level of DIY investors in this market is that online brokerage systems become strained under the volume. After the frenzy of the cannabis and crypto craze in early 2019, why system overload is still an issue is a bit of a mystery, but being what it is, the backlog of calls and delays in account opening processing reflects the pace and priority of technical and support system investment.

In fact, this past week, there was a fairly critical article in the Financial Post which highlighted the malaise of DIY investors who reported losing money on trades because of system failures and order-related mishaps at many of Canada’s largest bank-owned and independent online brokerages. Had this been during “normal” times in the market, outages would not be getting the kind of coverage they are, but these are not normal times.

A closer inspection of the complaints being cited in the Financial Post article shows that they were from investors using highly leveraged securities, for example, the Direxion Daily S&P 500 Bull 3X Shares, or those using options trades or who were intent on quickly flipping a trade on a highly volatile cannabis stock. These are not the garden variety buy-and-hold or passive investors, and this confirms the data we’ve published in previous weekly roundups as to which DIY investors were in this market.

There are only a small handful of online discount brokerages with platforms and data packages that are equipped to service clients who want to trade this actively and it is, by all measures, the most ideal time for Canadian online brokerages to step up their efforts in appealing to this group of investors, both in service experience and incentives. It perhaps won’t be too long before offers to attract these investors are launched – however, there is a cruel irony at work.

At the time when these most highly-prized active online investors want to sign up and trade with Canadian discount brokerages, the systems cannot support the volume nor can the client service teams keep pace. It seems that grocery stores aren’t the only place that Canadian DIY investors are going to be forced to wait in line.

To drive this point home even further, it was also remarkable to witness Wealthsimple Trade have to place new clients who had signed up to invest on a waitlist to trade after they’ve signed up to trade. As much as Wealthsimple Trade has earned its current standing as innovative and disruptive to the Canadian wealth management landscape, moments like those observed last week are damming and not-soon-forgotten.

@wstrade As a new user, why would you not include this message when I was signing up and depositing money? I now can’t make trades and have not even been provided with a timeline of when I can expext to be off the waitlist #disappointing pic.twitter.com/tO2Y52wmjF

For all of the assurances that Canadian DIY investors are provided as to the safety of their investments, moments of extreme strain on the systems reveal there are still many points of possible failure. While there is already a lot of compliance burden on Canadian online brokerages, when it comes to financial services, the latest in a recurring set of examples points to the need for greater transparency in technical system integrity. System reliability, scalability, and service provision capability are factors that DIY investors are learning that will be crucial to determining which online discount brokerage can best suit their needs.

On the flip side, one way that Canadian online brokerages can avoid having this surge of interest show up where new accounts need to be opened in the height of market volatility is by ramping up their marketing efforts across the year.

If Canadian online brokerages effectively “flattened the curve” of demand or “raised the line” on their own systems through a combination of assertive “always on” marketing campaigns and appropriate investments in scalable technology systems, this kind of system overwhelm could be mitigated. Had the market volatility hit a mere two or three weeks earlier, at the peak of RSP contribution season, the results could have been catastrophic for Canadian DIY investors.

As the world continues to be forced to adapt and learn from the COVID-19 crisis, there will undoubtedly be lessons that Canadian discount brokerages will be learning from as well.

Much Ado about Noting

In one of the more apropos headings to be found in a Weekly Roundup, this one is a play on words from a famous William Shakespeare play in which one of the key arcs happens to be about the consequences of not providing the full picture.

In the Canadian online brokerage world, when it comes to the disclosure to clients of certain key information about their investments, there is no room for playing around.

From about the end of 2013, Canadian regulators at the Investment Industry Regulatory Organization of Canada (IIROC) initiated a revision to the way in which member organizations were to report certain pieces of key information to Canadian investors. Regulators gave member organizations, including Canadian discount brokerages, a long runway of about 3 years to implement changes to the way in which investor statements were organized to ensure that organizations had sufficient time to implement the necessary changes.

Unfortunately for one organization, however, the decision to step offside of a regulatory requirement was met with a harsh rebuke. TD Waterhouse Canada was fined a stunning $4 million dollars (plus almost $30 thousand dollars in legal fees) for its decision to not comply directly with the CRM2 requirements.

There are a number of intriguing angles to this story, but what sticks out is what the calculus of this plan must have been to warrant such an action. It truly begs the question “what were they thinking?” in running afoul of regulators and exposing themselves to the kind of financial penalty they ultimately ended up having to pay.

With any business decision, the risk has to be worth the reward.

Looking at the fascinating details of this particular event, it was clear that the downside of ensuring that the TD Direct Investing was fully compliant within the timeframe laid out by IIROC seems to have suggested that there would have been some messy tax consequences and potential litigation that could have ensued. In short, facing the stern – if not damning – language (see image below) and fine was potentially the better option. 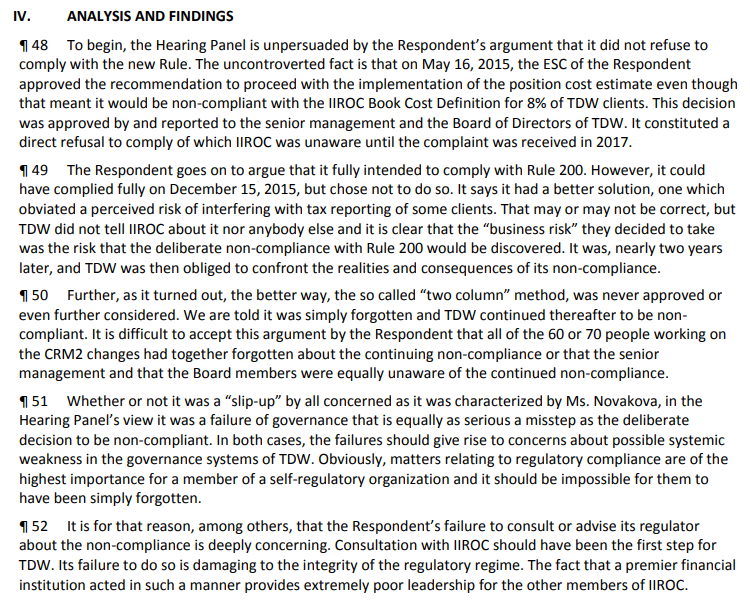 Ultimately, the persistence of a single client that sought information that was legally required from TD Direct Investing was what triggered the avalanche of activity that concluded in the fine and the damaging rebuke. It demonstrates that individual clients do, in fact, have the power to hold their vendors – in this case, online brokerages – accountable.

In the language of the panel’s decision:

“In the modern world where news is distributed almost instantaneously and widely by all forms of media, the reputational aspect has to be taken into account in fixing a sanction. Major financial institutions such as TDW invest large amounts of time and money in promoting their brands. While they may be able to easily afford large fines as a cost of doing business, bad publicity is very bad for business and that in itself provides a strong specific deterrence.”

For a brokerage of the size and repute of TD Direct Investing (TD Waterhouse) to be called out by IIROC is a very big deal and certainly something their peers – and perhaps investors – will take note of.

Go with the Flow

Redditors discuss an article from the New York Times of an investor who was rocked by the recent fluctuations in the market in this post. Forum users go back and forth on the impacts of the markets on their own portfolios and investment plans.

A forum user asks how they may be able to short the market and fellow Redditors offer their two cents on the incredible risks involved in this post.

That’s it for another edition of the Roundup. To close out this irony-filled edition, markets also appear to be both fast and furious. While the plot of the unfolding saga in the markets may be hard to follow, there is certainly no shortage of action unfolding a quarter mile at a time.