Black Friday is just around the corner and with just about everyone looking for a bargain, it will be a fine balance to keep things profitable in the face of so many deals. For DIY investors, the good news is that deals keep rolling in and even for online brokerages, there seems to be some interest in making an important purchase.

In this edition of the Roundup, we dive into the latest deal from a bank-owned online brokerage that highlights just how competitive things are getting heading into the end of the year. Of course, the competitive landscape here in Canada pales in comparison to the US where another mega-story is unfolding between the largest players on the online brokerage field. After a decent helping of news, we’ve got just the right amount of extra topping with chatter from Twitter and the investor forums to dig into.

With November quickly drawing to a close, the one thing that Canadian discount brokerages are seeing more of (other than requests to drop their commission prices to zero) is investors hunting for places to open up online trading accounts – in particular TFSAs and RRSPs.

This past week we took note of yet another online brokerage who is jumping back into the deals hot tub. Scotia iTRADE, one of Canada’s big 5 bank-owned online brokerages, stepped forward with a promotion that combines a lowered standard commission price of $6.99 with either a cash back or commission-free trade option. 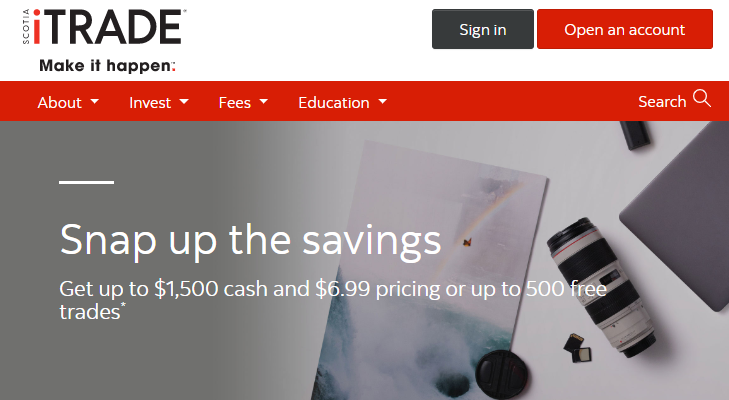 Building on the momentum from their campaign in the summer featuring a number of social media influencers, it appears that the mass market version of that offer has substantially more tiers and as such, Scotia iTRADE is marketing to multiple investors with this offer.

Scotia iTRADE’s latest promotion consists of 8 deposit tiers, starting with a remarkably low entry point of $5,000 and going all the way up to $1M+. In doing so, Scotia iTRADE has positioned its offer against two of its bank-owned competitors that also have cash back offers, namely CIBC Investor’s Edge and BMO InvestorLine. The table below, which we first wrote about earlier this month, shows an updated view of exactly where the different tiers for Scotia iTRADE’s latest promotion stack up against its peers.

For non-referral offers, Scotia iTRADE actually has the best cash back promotion going for deposits ranging from $5,000 to $24,999. Specifically, it has cash back offerings of $25 and $50 (respectively) as well as a combined drop of commission prices (albeit temporarily until June 2020) to $6.99 per trade. This puts the commission price for Scotia iTRADE’s promotional period very close to the standard pricing for CIBC Investor’s Edge, at $6.95. Scotia iTRADE’s platform and associated features, commission-free ETF selection, and experience in technology could overall, arguably, make it of greater value than the difference of $0.04 per trade (at least over the short term).

For deposits ranging from $25,000 to $249,999, Scotia iTRADE’s cash back offering is on par with CIBC Investor’s Edge. The differentiating factors, therefore, make it debatable as to which bank-owned discount brokerage offers the better value.

For active investors, or those investors that favour ETFs, the decision will likely tilt towards Scotia iTRADE and for more price sensitive investors, CIBC Investor’s Edge might win out because of their commission pricing (and the fact that $6.95 is their standard price, not a promotional one).

Where things start to get interesting is at the higher tier of deposits – specifically deposits greater than $250,000.

At these high deposit levels ($1M+), it may seem trivial to be talking about the relatively small amount of cash back offered relative to the deposit itself, however when it comes to competing offers from bank-owned online brokerages, getting almost twice the level of cash back (and access to commission-free ETFs and lower per-trade commission pricing for a limited time), the value proposition is too hard to simply ignore.

Of course, there’s a whole other category that the latest Scotia iTRADE promotion also competes against, which is commission-free trades. In this category of promotion, there are three other primary competitors, Desjardins Online Brokerage, Questrade and RBC Direct Investing.

When it comes to something like a commission-free trade offer, however, there are a few more moving parts for investors to calculate to determine the true value. For example, what the standard commission pricing is and how long the free trades are “good for” are two important factors DIY investors should consider when evaluating a commission-free deal.

The multiple moving parts, and the tangibility of cash back mean that commission-free trades are typically less appealing than their cash back counterparts.

Drilling down into the latest offer from Scotia iTRADE shows that the competition between bank-owned online brokerages in Canada is heating up. The end game for the Canadian discount brokerage space is about scale – and for DIY investors who have assets to invest, there is clearly room to negotiate. With iTRADE now in the mix, most of Canada’s bank-owned brokerages are “in market” with compelling offers for at least some segments of investors. This ups the ante and the pressure on any remaining brokerages without ANY offers to step in quickly.

As in the stock market, timing is everything. While there are benefits to seeing what everyone else is doing with respect to pricing, any brokerage waiting too long is going to risk being out in the cold when it comes to attracting clients and assets while investing is top of mind.

If it seems like the US online brokerage market has been in the news and been a topic of conversation in the Weekly Roundup since October, that is because it has. The tsunami of news about online brokerage commissions in the US going to zero took on even more life this past week, with chatter that the largest online brokerage, Schwab, looking to take over rival TD Ameritrade for a projected sum of $26 billion (USD).

Suffice to say that this combination of brokerages was not among the top of the list of forecasted scenarios. There was much more hype and focus on E*Trade as a takeover target than Ameritrade. Even so, contemplating a merger between two of the biggest online brokerages in the US paints a distinctly bipolar picture for the industry as a whole. The winners – both Schwab and Ameritrade – can be seen by the rise in the stock price upon the market learning of this potential deal. The clear losers, at least according to the market, E*Trade and Interactive Brokers.

It might be safe to say that Interactive Brokers didn’t see this magnitude of impact erupting when they chose to launch their commission-free trading platform, IBKR Lite, which is seen as being the tipping point that led the online brokerage industry as a whole in the US to decide to go to zero-commission pricing.

Among the pivotal questions – will this deal go through? And assuming it does, what does that then mean for rivals like Interactive Brokers and E*Trade? What about the new entrants? The Robinhoods of the world will be left competing against a brokerage the size and scale of the combined entity that might be Schwab and Ameritrade (aka Schwameritrade?).

If there are any clues as to what this means for other brokerages, it might be derived from Schwab’s reporting of their account growth since going commission-free. Schwab reportedly gained 142,000 new client accounts and blew the doors off their previous new account growth numbers (and likely that of their competitors). Clearly the calculus on commission-free trading accounts has paid off for Schwab.

Despite the still-fluid state of the US online brokerage landscape, Canadian market observers are trying to get a proxy on whether or not what is happening in the US will play out in the same way here in Canada.

Secondly, if it wasn’t clear before, it is now abundantly clear that scale matters when it comes to online investing and wealth management more broadly.

The only remaining independent (i.e. non-bank or non-big financial partner owned) online brokerage in Canada is Questrade. Its scale and technology stack – in particular its trading platform, make it an interesting possible fit for a very small number of bank-owned brokerages who are lagging behind the biggest player, TD Direct Investing, in terms of platform and user experience. Nonetheless, when it comes to choices for massive growth in the Canadian online brokerage provider space, there aren’t many places where it is possible; unless providers exit the space or merge (or are acquired).

The possible merger between Schwab and TD Ameritrade will still have to face a great deal of scrutiny from market and anti-trust regulators. The test of whether this will ultimately have beneficial or harmful effect for the marketplace is still an open question considering how much of the market of wealth management these two firms would influence or control. Even so, there are definite hints of further consolidation to come in the US and perhaps one day here in the Canadian online brokerage space.

In a world where lower commissions are a reality, there has to be greater scale or volume to keep things profitable otherwise the notion of a lower price making investing more accessible will actually have the opposite effect. Heading into Black Friday it seems that when it comes to low commission prices, investors should be careful of what they wish for.

Won is the Luckiest Number?

A DIY investor seeks advice for creating his own portfolio and wonders if a one-and-done, or all-in-one, ETF can help him save on fees and get better returns. Forum users weigh in with the advantages of these types of investments in this post.

That’s a wrap on another edition of the Roundup. Shopping is clearly in the air, with strong retail sales in Canada tied to economic strength, Tesla rolling out a new Cybertruck – the new Musk-have toy for Christmas, and Black Friday coming around the corner. DIY investors love a good bargain, so this week, more than most, it pays to do your homework. Happy hunting!