Halloween is just around the corner, and for the online brokerage industry, it appears that they’re poised to deliver lots of treats and perhaps even a few tricks for DIY investors this year. Of course, this year’s scary prospect for Canadian discount brokerages might be vanishing profits, but as the US online brokerages are showing, even when commissions disappear, profits don’t have to.

In this edition of the Roundup, we continue our coverage of the fallout of falling commission prices, with a closer look at the conference call from TD Ameritrade and what hints it provided for the US and Canadian online brokerage industry. From there, we take a peek into what the folks in Sherwood forest are up to now that their vision of a zero-commission world is here, and they have to compete in it. As always, we’ll cap things off with chatter from investors on Twitter and in the investor forums.

It’s hard to pick a bigger story for this month or year than the fall of commission prices for stock trading in the US. This past week provided additional colour to the unfolding saga of the new reality for online investors and online brokerages in the US, as TD Ameritrade reported earnings and held their investor conference call.

With several earnings announcements and conference calls already having taken place (for Interactive Brokers and E*TRADE), it was interesting to see where the analysts who were on the call focused their questions and what could be gleaned from the responses of outgoing CEO Tim Hockey and CFO Steve Boyle.

There were a number of interesting, if not surprising, observations about this call, with implications for the US online brokerage market in general, and perhaps hints of things to come for Canadian online brokerages too. 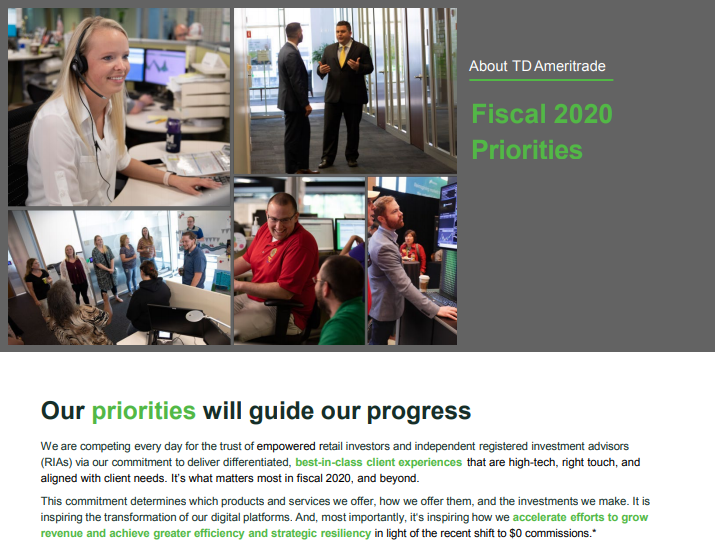 One of the first standout items about this conference call was that the analyst questions appeared to take the new commission-free reality in stride. Unlike the clearly disoriented moments in early October when the pricing cuts were announced, there was clearly a more rational tone struck that seemed to suggest: “commission-free trading is here to stay, now what?”

Perhaps the clearest recurring question that came up on the conference call was that of mergers & acquisitions – with the subtext being the acquisition of E*TRADE.

A total of six questions referenced directly or indirectly the prospect of an acquisition being more likely now that commissions have gone to zero. While there was no definitive response on the part of Ameritrade regarding possible acquisitions (or being acquired), there was a clear acknowledgement that TD Ameritrade’s timing for the acquisition of Scottrade couldn’t have been better because it contributed scale. Nonetheless, reading between the lines on that response, it is clear that scale is going to be a critical pillar to the success of TD Ameritrade going forward.

In terms of the path forward, TD Ameritrade is looking for both growth and for increased efficiency. In terms of growth, areas such as stock lending appeared to have boosted earnings coming into this call (bets against cannabis and Beyond Meat helped that), however, in the longer term, they are looking to other lines of business and to other markets overseas to boost assets and revenues.

Outside of growth, there were also remarks and comments made with respect to cutting costs. It is abundantly clear from Schwab and E*TRADE that the path forward to sustainability in the zero-commission world is going to require efficiency, or as they like to call it, “streamlining.”

What stood out as an interesting move is the sentiment expressed by Boyle that Ameritrade is going to be “focusing on what is our core competency where we can grow, not trying to be all things to all people.” Subtle shade aside to the online brokerages moving into more traditional financial services, the notable context here is that Ameritrade is going to ramp up efforts to acquire and service high net worth individuals and potentially look to realign how they deliver services to account holders that may not take advantage of the full feature set. Specifically, Boyle stated “we do have a number of customers who have relatively small revenue with us. And we think it – there are a number of ways where we’re providing value that people will be willing to pay for.”

What is apparent from the ability of TD Ameritrade to pivot their pricing so quickly to zero was that this eventuality is something they had prepared for for quite some time. In fact, the “strategic resiliency project,” as it was called, was set in motion in 2017 so there was plenty of runway for Ameritrade to adjust to the new reality.

Hockey was surprisingly upbeat about the zero-commission move. His confidence rested on the premise that Ameritrade has an award-winning (and perhaps best of breed) platform that passive and active investors alike will take to, as well as deep bench of value-added features that other online brokerages have not invested in to the same degree. The net result: with commission price no longer a barrier, Ameritrade has one of the strongest competitive advantages in terms of customer experience of all the major US online brokerages and that will attract customers away from other brokerages. Anecdotally, according to Hockey, this is already happening.

For Canadian discount brokerages, the emerging playbook for the zero-commission reality is starting to become clearer thanks to the experiences of brokerages south of the border. While it is still likely to be some time before commission prices hit zero in Canada, it is clear that the path to financial sustainability for discount brokerages rests in creating a best-in-class service and technology experience, as well as offering access to other financial services. As such, it is no longer a race to the bottom per se as much as it is a race to the middle.

The balance of technology, pricing, and experience mean that investors looking to manage their wealth, not just trade the stock market, will think holistically about who the right online brokerage is for them. Conversely, the zero-commission rate also appears to be providing a chance for online brokerages to rethink who the right customers are for them.

The ground is clearly shifting beneath the online brokerage industry in both the US and here in Canada. Even though the headlines this month have been dominated by the drop in commission fees by the major online brokerages, there have nonetheless been important stories and developments that deserve a little more time in the spotlight.

Now on the defensive, the online brokerage that was the catalyst in “democratizing” pricing for online investors, Robinhood, announced this month the re-launch of their cash management program.

One of the more potent arrows in its quiver, the cash management feature offers Robinhood clients the ability to earn high interest (2.05% at the time of publishing) on uninvested cash balances as well as access to a (great looking) debit card.

Just under a year ago, Robinhood attempted to launch this feature by labelling it as a checking/savings feature, and in doing so, earned the extreme ire of the US financial regulators. Nonetheless, after some time in the penalty box, Robinhood posted to their blog that their shiny new feature is “coming soon” – an interesting move in the midst of the zero-commission melee, as the report got eclipsed by bigger news stories about the industry.

Even so, Robinhood, like Interactive Brokers, has picked up on the idea that offering high-ish interest on uninvested cash balances is likely to not only keep existing customers happy but appeal to prospective customers.

Another new feature announcement from Robinhood also launched last week, which is the roll out of stop-limit orders for options trading. Interestingly, despite zero-commission trades for equities being implemented at other online brokerages in the US, options trading commissions – specifically per contract prices – are still in place. At Robinhood, however, options trading (including the per contract fee) is still $0.

The launch of this new feature is likely one part the result of client request and another part strategic news item to point out that there are still features to Robinhood that provide economic benefits to active investors. That said, options trading is both more complex and obscure to many DIY investors than stock trading is.

The data and platform requirements are equally more sophisticated, as are the competitors (e.g. Tastyworks) so Robinhood definitely has its work cut out to be able to effectively draw DIY investors into options trading if they don’t already do it, or to attract options traders into their platform and away from the bells and whistles that other platforms already offer.

In spite of the new features, it is clear the path forward for Robinhood is going to be significantly tougher to compete in. By all measures, the stand-alone online brokerage is officially a thing of the past, and where they were once entirely focused on stock trading, they are now going to have to be able to execute well in options trading, cryptocurrency trading, and broader personal financial services. With other financial service providers launching commission-free trades, including Square announcing the end of 2019 as when they’ll roll it out, we’re really excited to see what innovations drive interest and investors to particular brokerages and investments next.

Safety is no Accident

A self-proclaimed “couch potato investor” on Reddit contemplates switching from Questrade to TD Direct Investing due to concerns over Questrade’s security guarantee. Forum users weigh in on their favourite discount brokerages and the role they have to play in security precautions.

A Redditor who has newly signed up to Desjardins for their group RRSP at work asks for guidance in which fund to pick. Commenters on this post explain RRSPs and offer advice on assessing one’s risk aversion.

That’s it for another week of discount brokerage activities. There continue to be lots of smaller developments that we’re tracking as the news about zero-commission trading continues to settle down. The next big wave of earnings is also washing over the market, so in addition to the sugar high from all the candy consumed this week, there’s also going to be lots of data to digest. Hooray for spreadsheets!