It seems like more and more discussion is taking place around the “R” word. Of course, with stranger things taking place around the world with respect to interest rates, trade wars, and conflicting accounts from economic indicators, it’s tough to make heads or tails of what’s going on. Despite the pervasive and heightened uncertainty, one thing is clear: there’s a lot of forecasting taking place about what may happen next in the stock markets.

As far back as April of 2019, Interactive Brokers founder and outgoing CEO, Thomas Peterffy, signalled that Interactive Brokers would officially launch something “big” to catalyze growth to their business. That big bet, as it turned out, was the launch of a simulated sports betting platform (launched in July) designed to attract individuals who were a cut above the traditional gambler. Think Moneyball meets Wall Street.

With September now just a few weeks away, the kickoff to the new season of the NFL will also usher in a tsunami of football chatter around trading desks and water coolers across North America. As it happens, the NFL is slated to be added to the lineup of games that users of the Interactive Brokers sports betting simulator can bet on.

Fantasy football (indeed fantasy sports in general) is a wildly popular endeavour. So, it stands to reason that with the influx of interest in the new season of the NFL combined with a platform that offers up the stats and quant geeks of the football world a chance to flex their bulging bell curves, Interactive Brokers may find its pool of potential new clients after all.

Another big catalyst for online brokerages like Interactive Brokers is the market volatility itself.

When markets become uncertain, that’s typically when efficiency in pricing breaks down and when active traders step back into the mix to find compelling trades. So, despite volatility being generally bad news for many investors, for active traders, the volatility is a sign of opportunity.

Combined with lower interest rates, the ability to access margin means that firms like Interactive Brokers could stand to benefit from increased trading activity (and therefore commission revenue). That said, the last time the markets were signalling an increase in volatility, Interactive Brokers pre-emptively raised margin requirements to protect against the sudden swing in prices, a deft move that saved them from considerable margin loan losses while their peer firms unfortunately did not fare as well.

As September nears, we’ll be keeping a close eye on what Interactive Brokers (and other online brokers) will be doing with margin requirements as that may once again prove a definitive canary-in-the-coal-mine.

Stimulus in the Deals & Promotions Section

With the “R” word now making the rounds in major news and business media (as well as the content of several large online brokerages), sentiment among DIY investors towards entering into the markets is undoubtedly going to turn negative.

As it just so happens, September is historically when investing activity picks up again and for many financial services firms (especially online brokerages), this represents the second-last month of the fiscal year. Translation: it’s a great time to boost performance stats for the fiscal year by landing more client accounts.

Financial performance aside, savvy online brokerages understand that in today’s fiercely competitive market for DIY investor assets, it will be important to stand out, especially during the market storm.

One quick way to incentivize investors to pay attention is with a good deal. The seasoned investors will undoubtedly be out looking for compelling deals in the stock market and will also recognize a good offer from an online brokerage if one were to surface. Ironically, central banks won’t be the only ones contemplating how to boost market performance with rate cuts.

Pricing discounts are just one option, however. In the current market climate, one way to soothe the angst of investor uncertainty is with access to good information and market coverage. So, while cash back promotions or commission-free trades are always fan favourites, the ability to stay informed about what’s happening in markets in either real-time or with in-depth coverage would also be value added.

This past week, RBC Direct Investing tackled the thorny subject of trade protectionism in its “Inspired Investor” publication, and TD’s MoneyTalk tried to unpack the possibility of a recession in its most recent episode. Most Canadian online brokerages, however, have been mum on the subject. For those online brokerages who have invested in strong content production programs, now is the time when those investments pay off not only as news sources for their own clients, but also as a mechanism to stand apart from other brokerages (or other content providers) who can’t offer the same degree of insight into market direction.

Of course while incentives and promotions are one quick way to get on investors’ radar, the so-called “nuclear option” of getting noticed is to drop commission fees down to zero.

So far, Wealthsimple Trade is the only Canadian online brokerage to offer zero commissions on all trades, with other providers such as Questrade, Virtual Brokers, and National Bank Direct Brokerage offering some kind of commission-free trading on ETFs.

In addition to price, there’s also going to have to be a step change in how incumbent Canadian online brokerages connect with clients (and potential clients).

What Wealthsimple’s latest advertising stunt of the tiny stadium in downtown Toronto shows, is that they’re also capable of pushing the envelope for innovation in messaging for wealth management services providers. At the heart of it though is the “perceived value” of what a commission charge gets you. Many large Canadian online brokerages have publicly been called out for struggles with technology stability or scalable customer service access, so the notion that “bigger is better” doesn’t necessarily match consumers comments and reviews online. 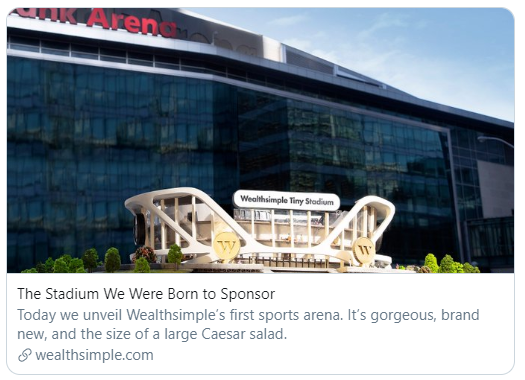 The takeaway is that as competition continues to grow for investor assets, so does the likelihood that there will be another major commission pricing announcement from an existing provider. For new entrants into the online brokerage space, unless there’s a quantum leap in trading platform experience, going to zero-commission or using ultra-low commission pricing is likely the path forward.

Regardless of the stock market’s immediate direction and sentiment, Canada’s online brokerages have had to navigate choppy waters before. What is different this time, however, is that there is a strong likelihood that there is a recession on the horizon and considerably more competition to boot. Heading into busier times in the weeks ahead, the advice for Canadian online brokerages is simple: prepare accordingly.

An inexperienced investor collected opinions about Wealthsimple and found out what fellow Redditors like, what types of investments they recommend through this brokerage, and how they use their Wealthsimple accounts. Read the discussion here.

Freshly motivated to maximize his returns and concerned about missed opportunities, a Redditor who passively accumulated savings into a TFSA is looking for advice on a more assertive investment strategy.

Savvy investors know that there’s always a bull market somewhere. With headlines the world over fixated on the trade war and uncertainty, sentiment is clearly shifting negative, but with gold perking up and a range of vehicles available to capitalize on volatility, it seems that aside from capital to wade into this storm, it’s going to take the gumption to keep going.