It’s not just temperatures that are rising anymore. Markets, tempers, and purses for eSports tournaments have all made headlines for reaching new highs. For online brokerages, even though trading might be growing, revenues may not be.

In this edition of the roundup, we continue our foray into US online brokerage earnings, with some big headline developments and a more ominous cloud forming on the horizon for the industry. From there, we’ve bundled in a couple of small but interesting stories from developments we spotted at Canadian discount brokerages. As always, we’ve got a healthy serving of chatter from investors in the forums and on Twitter to close things out.

Earnings season for the US online brokerages is now officially in the books for another quarter. Despite how competitive the online brokerage industry is in the US, one of the most interesting resources to gain insight into what’s happening behind the curtain is to tune into earnings calls for those publicly traded online brokerage firms. These calls typically feature senior executives – such as the CEO and CFO – sharing their highlights of the quarter as well as answering questions from analysts who are seeking to understand how best to price in the news being disclosed in the accompanying earnings reports.

The latest round of earnings calls provided a number of interesting insights about developments at specific brokerages, as well as about the industry as a whole that anyone who watches the space will certainly want to pay attention to.

Starting first with the biggest news announced by TD Ameritrade, their CEO Tim Hockey will be stepping down. While announcements of this nature are not uncommon, it did seem to catch the analysts off guard – perhaps a compliment to Hockey and the achievement of Ameritrade under his leadership. After all, “if it ain’t broke, don’t fix it,” or so the saying goes.

Ameritrade has experienced significant growth over the 3.5 years that Hockey has been at the helm, and he has seen them through a major acquisition and a number of digital transformation initiatives. So, naturally, the questions coming from most of the analysts on the call were mostly of the “what gives?” variety. They were trying to tease out whether or not the decision for Hockey to step down was driven by a difference in vision for the brand than what the Board had in mind. Fortunately, Hockey did a good job of helping to assuage speculation by clearly stating reasons that weren’t behind his stepping down, however, the shift in leadership at the top will undoubtedly cast some uncertainty onto the future of the franchise.

TD Ameritrade isn’t the only US online brokerage to telegraph a leadership change in 2019. Earlier this year, Interactive Brokers announced a change of leadership that will take place in the third quarter of this year as founder and CEO Thomas Peterffy steps aside on his 75th birthday, and current president of Interactive Brokers, Milan Galik, takes over.

For comparison, however, Peterffy has been at the reins of Interactive Brokers for 42 years, while Hockey has been at the head of TD Ameritrade for 3.5 years. The kind of continuity and long-term strategic execution that comes with such a long tenure is evident in many founder-led enterprises.

The replacement for Hockey is going to be chosen by an executive search firm while by comparison, Interactive Brokers is hiring from within. In fact, the successor to Peterffy has been with the organization for 28 years and has been groomed for the position for the past four years.

Leadership turnover is something that will make waves with analysts, and both they and the competition will undoubtedly take great interest in who will wear the captain’s jersey next at Ameritrade. There is a strong precedent of achieving big things quickly at Ameritrade, so whoever is cast to lead them through their next cycle will have some especially challenging waters to navigate, given what else was uncovered in reviewing the recent earnings calls.

Headline news aside, there was one potentially ominous theme about the online brokerage space as a whole that emerged from the various reports, namely that revenues from trading were decreasing even in spite of higher trading activity.

Here’s what the various brokerages had to say:

Another interesting nuance to the earnings is in the operating efficiency of each organization. Interactive Brokers boasts an incredible pretax margin of 64% which handily beats out any of their competitors (who are at a not-too-shabby >40% level). This is crucial because Interactive Brokers charges less per trade and yet they are capable of keeping much more of the revenues they generate as profits than their competitors do. Nonetheless, despite their low rates, they too are not immune to falling revenue from commissions.

While it is difficult to map what’s going on in the US online brokerage space directly onto the Canadian market, it’s worth noting that commissions per trade at Canadian online brokerages still have lots of room to fall – especially at the major bank-owned online brokerages who, for the most part, continue to charge almost $10 per trade. Further, it’s clear that unless Canadian online brokerages commit to becoming exceptionally efficient from a technology and automation standpoint, they will have to explore other mechanisms to boost revenues (like digital advice services or premium features) otherwise, their profitability is going to suffer.

Without the pressure of being publicly traded, Canadian online brokerages are free to operate outside of the same kind of quarterly scrutiny that their US brokerage peers have to navigate. This means that the pressure to innovate is going to be largely driven either at the consumer end or internally.

For bank-owned brokerages, there may be some pressure to innovate and capture market share owing to their publicly traded parents, however at most of these brokerages, that pace of change is clearly not the same rate that exists in the US.

One other piece of news that will also help put the latest US online brokerage earnings into perspective is that Robinhood, the US online brokerage that doesn’t charge any commission fees per trade, announced this past week that they have raised US $323M in Series E financing, which puts their valuation at US $7.6B.

When compared against the market cap values for the publicly traded US online brokerages shown above, Robinhood’s latest valuation shows that they are clearly being priced as a material competitor to the incumbent publicly traded brokerages. It is also worth noting that Robhinhood has telegraphed their intention to go public at some point.

Interactive Brokers has certainly paved the way for this in the US, with E*TRADE also following suit. Although they fumbled the initial roll out, even Robinhood is gearing up to win new business by offering up high interest savings for uninvested cash balances. As both a mechanism to attract new clients and entice existing ones to stick around, the evidence from the US online brokerages points to the strength of this feature in hanging on to existing clients.

With the final half of calendar 2019 now underway, the online brokerages in the US (and likely here in Canada) have already started developing their plans for 2020. For Canadian online brokerages, we fully expect some bigger and bolder feature releases to come to market to counter what is a clear trend towards lower commissions. In fact, as the next stories in the roundup show, it’s already starting to happen.

Regardless of where markets head into the back half of the year, things are going to get very interesting for Canadian DIY investors as online brokerages here set about the task of staying relevant in this new operating reality.

This past week, we spotted a new feature announcement on the CIBC Investor’s Edge website: the launch of charting capabilities on their mobile trading app “CIBC Mobile Wealth.”

Officially launched in the middle of July, this latest update will undoubtedly be a welcome addition to how online investors track and seek out investing opportunities. 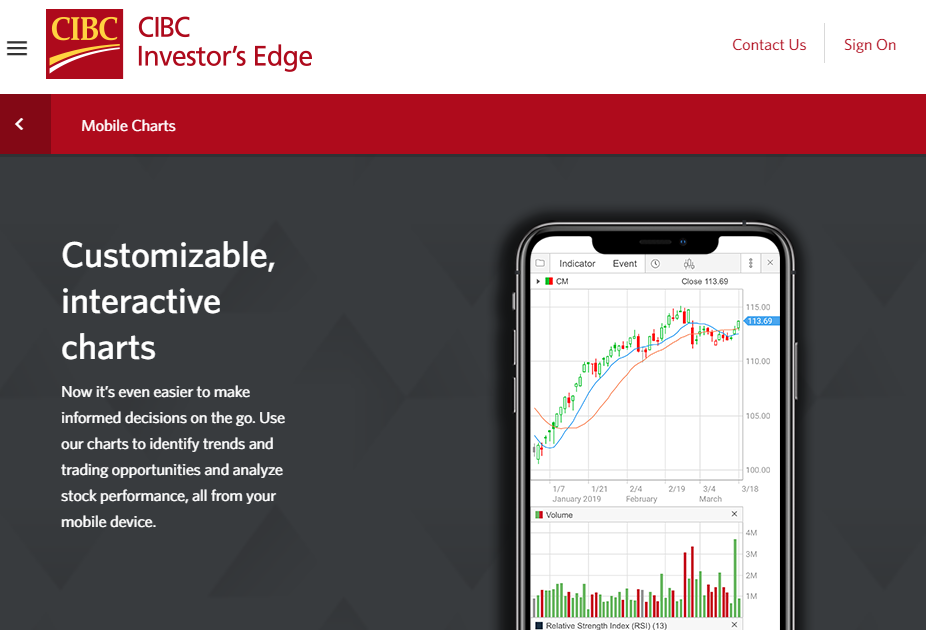 According to the information released on their website, the new charting feature is available for individual securities as well as for indices, foreign exchange, and commodities. In addition, users are able to change time frames, use a limited number of technical indicators, as well as choose from four different chart styles.

While we haven’t yet seen a lot of chatter about this new feature online, scanning some of the pain points that users of the app have mentioned in their respective download reviews, charting does surface as one of the limitations of the CIBC mobile experience. Fortunately for investors and Investor’s Edge, it appears this new feature will enable them to chart a new course in online mobile trading experience.

This past week, we noted that Canadian online brokerage Questrade rolled out an interesting new blog series entitled “The Investor Next Door.” According to the blog post, the Investor Next Door series talks to “everyday Canadians about their investment journeys” in a Q&A format post. 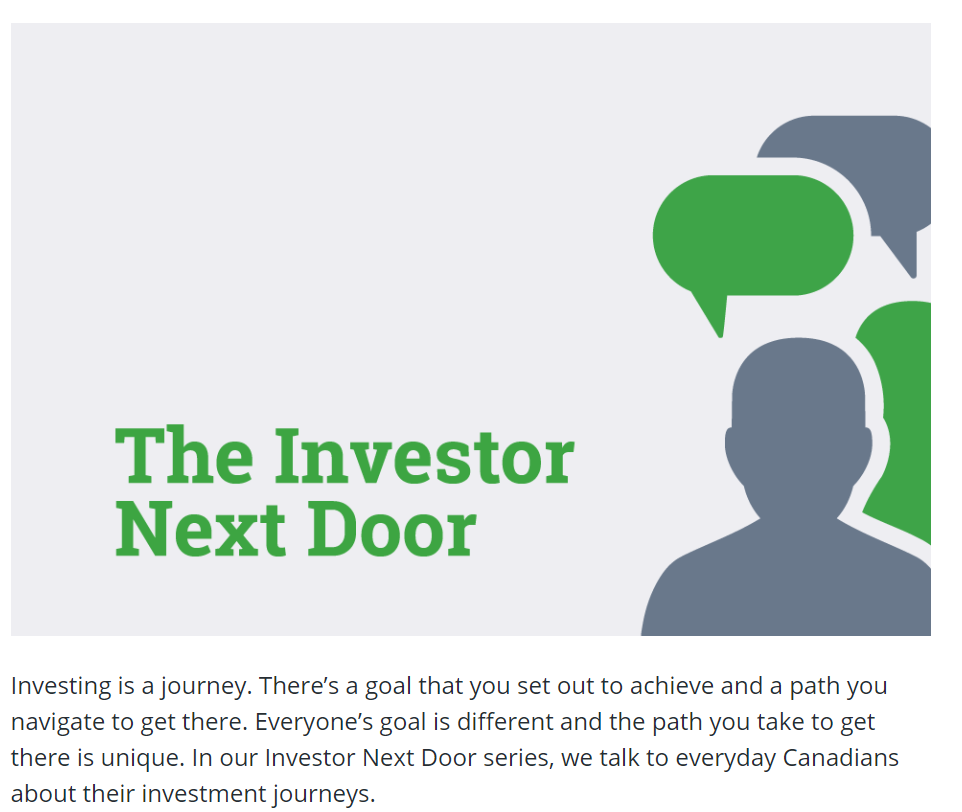 The first post interviews “Brendan Y” about the type of investor they are, their investment goals and style, as well as what their experiences are like in the markets and lessons learned.

After having a bit of a quiet spell on the Questrade blog, it looks like things are potentially coming back to life. There was a notable reboot of activity in February and March and so seeing signs of life, it appears that the team at Questrade is continuing to experiment with something a little different.

Why that is of interest is because Canadian online brokerages are still finding their footing with regards to producing “interesting” content for their clients and other online investors to consume.  In many respects, Canadian online wealth providers have been struggling to catch up to Wealthsimple, who has certainly reshaped the landscape of financial content in Canada by featuring “celebrities” and their stories of money.

It is particularly interesting, therefore, that Questrade is launching their new series about “everyday Canadians” as a direct counterpoint to the celebrity stories. Whether the new content angle ultimately succeeds will largely depend on how compelling the stories of other investors’ performance/lessons are to readers.

With a crowded field for content, it’s going to be a challenge for this written series to stand out.

Questrade has done well with their marketing/advertising campaigns (“asking tough questions”) so it will be interesting to see where this content piece fits in, if at all, to their bigger picture strategy. Regular consumers of financial content online will be asking why they should spend even four minutes reading about Brendan Y or “everyday Canadians” – let’s hope that’s not a tough question for Questrade themselves to answer.

Investing in US Stocks with CAD

What’s the better bet to invest in? Whether or not stocks seem more risky than real estate these days is up for debate. See what people had to say about investing in property vs. stocks on this Canadian Money Forum thread.

That’s another trip around the online brokerage space wrapped up. The upcoming week will be full of shrug (and maybe even cringe) worthy moments online. Ironically, despite a rate cut forecast for this week, there’s going to be lots of interest in the US. Keep the popcorn handy for this one.