Even though it was a tough week for hacking scandals, pipeline purchases and provincial politics, none of it mattered because Kim Kardashian visited the US President, J.R. Smith royally messed up game 1 for the Cavs, the US touched off a trade war with Canada and other trading partners. Even for traders who relish in volatility, this summer is going to be one heck of a ride.

In this edition of the roundup we take a look at the latest crop of discount brokerage deals, including a new trend for the summer season. From there we’ll review another emerging trend in the area of investor education topics that online brokerages seem to be more active in. As always, we’ll cue up the latest tweets from DIY investors and review the forum conversations on DIY investing.

Even though summer is just around the corner, the fact that it is still spring means that the latest online brokerage deals are considered part of the spring crop – at least if you look at the promotional codes of some of the deals.

The latest update to the Canadian discount brokerage deals and promotions section is now live and the good news is there is a strong selection of offers for DIY investors to choose from, especially until the middle of June.

There are a couple of interesting observations to take note of in the deals and promotions section this month. The big news specifically is that National Bank Direct Brokerage has come to market with an offer of commission free trades which are good for up to one year. The other bank-owned brokerage with a similar time frame on their commission-free trade offer is RBC Direct Investing.

This is likely no coincidence. The move by National Bank Direct Brokerage has some similarities to RBC’s offer, notably that time to use the commissions is one year and the minimum deposit is the same ($5,000). That said, there are some differences such as the fact that NBDB is offering five more trades than the RBC Direct Investing offer and NBDB is throwing in a discounted commission rate in the first year for anyone who uses up the 25 commission-free trades.

Another interesting observation is that both BMO InvestorLine and Desjardins Online Brokerage elected to extend their current offers; the latter being exclusively a commission-free trading offer while BMO InvestorLine’s is a combination of cash back and commission-free trades. Unlike the offers from National Bank Direct Brokerage and RBC Direct Investing, however, the time to use the free trades from BMO or Desjardins is significantly shorter.

Two key bank-owned online brokerages coming to market in the summer with similar promotional offers might not signal a trend, but it does point to the market shifting tactics – especially on the length of time for the commission-free trading.

We’re curious as to what will happen at mid-month, as National Bank Direct Brokerage has now clearly upped the ante with a more competitive offering than RBC’s in terms of free trades and incentives after the trades are used up. It begs the question, will RBC call, raise or fold?

From a strategy point of view, the popularity of commission-free offers has opened up an opportunity. Cash-back offers are not as crowded, and as a result, it may be a compelling spot for an aggressive offer to come to market. We know from internal data that there is definitely an appetite for cash-back offers among DIY investors. So, the combination of a lack of competition with those offers coupled with high demand from DIY investors means a cash-back offer can command the spotlight. Currently, BMO InvestorLine and Questrade (through the referral offer) are the only widely available cash-back offers. And, because of the nature of the Questrade offer, it’s only BMO InvestorLine that is widely advertising for theirs, which means they’ve got the digital field to themselves – at least for the time being.

Even though school has wrapped up (or will very soon) there seems to be an uptick in the investor education activities heading into summer. In particular, it looks like options trading is coming back into focus at several online brokerages.

Last week, the Options Education Day took place in Montreal and there were five online brokerages that sponsored the event.

Three of the five brokerages (National Bank Direct Brokerage, Desjardins Online Brokerage and Interactive Brokers) are all headquartered in Montreal so there was a home field advantage there, but for TD Direct Investing and CIBC Investor’s Edge, it was an interesting event to participate in.

According to the tweet posted on the Montreal Exchange’s Twitter account, there were over 200 attendees that participated which is a great draw for a Saturday session. 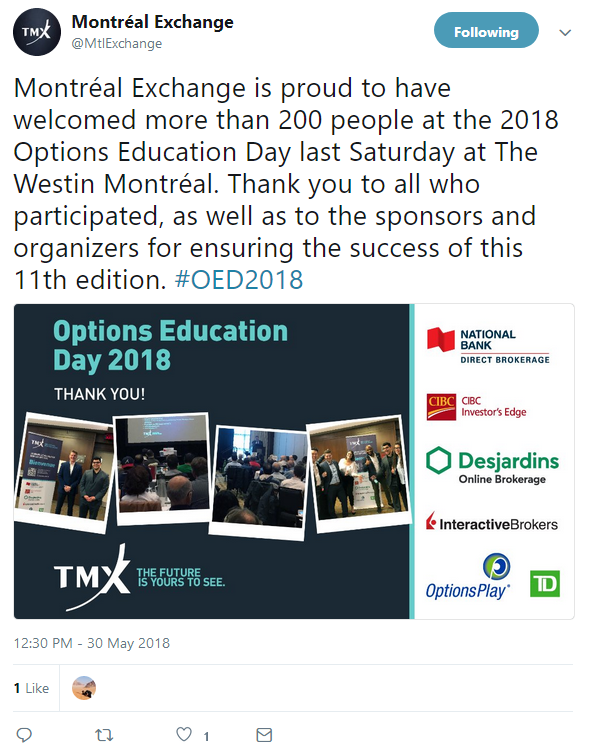 In addition to Options Education Day, National Bank Direct Brokerage has been broadcasting their options education video playlist, put together in conjunction with the Montreal Exchange, on their homepage for the past few months. And, coming up at the end of June, CIBC Investor’s Edge is holding a couple of options education webinars in English and French. 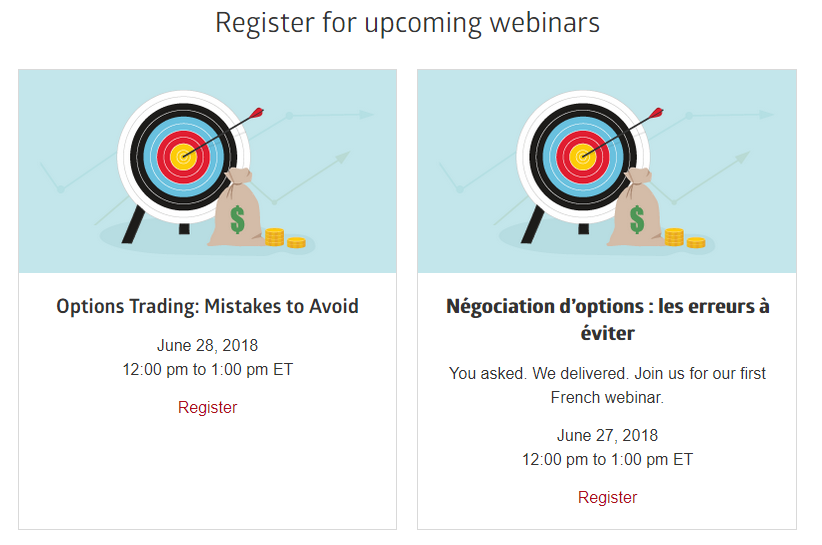 Even though we’re not quite over the line to summer, there is already a signal that online brokerages are ramping up their options education partnerships and content. With improved market volatility and some exciting stories coming to the stock markets through the second half of the year, it looks like options education might be a hot spot for new and interesting content.

Even though trading platforms have made it easy to buy and sell US-listed stocks, actually ensuring that the trade is being structured the way it is intended can sometimes be less intuitive. In this post from reddit’s Personal Finance Canada thread, one user learned the hard way about ensuring that cross border trades get executed and settled with the right currency conversions in place.

DIY investing is supposed to be less expensive but it hasn’t necessarily been a ‘set it and forget it’ experience until very recently. This post, also from reddit, is an interesting look at the alternatives now available for DIY investors who, like the author of the post, are looking to take a simple, low cost approach to investing on their own.

That’s a wrap on yet another wacky week. Fortunately the start of the new month falls on National Donut Day which means everyone wanting to emotionally eat their way into the weekend can feel a little less guilty for doing so. Of course, if you’re thinking to distract your way through the weekend with an Avengers movie, you might want to have some more donuts handy. Have a great weekend!

Literally all the Avengers talking to Star-Lord after THAT moment in “Infinity War.” #NBAFinals pic.twitter.com/S8bJEKHWhi