In this edition of the roundup, we’ll kick things off in chronological order since that will offer a brief reprieve of the madness from the past week. First, we’ll take a look at the good news – a new year and new deals from Canadian online brokerages. From there we’ll wade briefly into the melee of the first trading week of 2018 and survey the damage caused by trading outages and long wait times. We’ll wrap this inaugural 2018 roundup with chatter from DIY investors on Twitter and the investor forums. Fair warning, it’s not for the faint of heart.

The start of a new year brings with it the promise and hope of a fresh start. For many DIY investors, the new year is also an opportunity to move assets around, either into an existing TFSA or RRSP or poke around for a new online trading account.

This year, more than most in recent memory however, there is also a heightened sense of excitement. The combined forces of cryptocurrency, cannabis and climbing stock markets appear to have prompted DIY investors to step into the stock market in hopes of riding the wave of investing euphoria.

For Canadian DIY investors hunting for an online investing account, the great news is that discount brokerage deals and promotions also started off 2018 with a bang. With about 25 offers being advertised, almost all major Canadian online brokerages have an offer of one type or another to sweeten the pot to join them.

To kick off the month, BMO InvestorLine launched a new cash back & commission-free trade offer to replace their outgoing offer from the end of 2017. In addition, a move midway through December of last year to reduce the minimum deposit required for BMO’s digital/robo advisory service, SmartFolio, from $5,000 down to $1,000 means that BMO has competitive services offerings for individuals who prefer either the DIY or managed investing.

Also moving aggressively to attract new clients in December and through to March was TD Direct Investing. Their latest campaign launched in December and will be sure to attract the attention of DIY investors looking to a big bank-owned online brokerage account with a very competitive promotion.

The good news for DIY investors is that there are a handful of Canadian discount brokerages who are still on the sidelines who have a compelling incentive to come to market with some bold offers. Further, given some of the heartache caused by trading outages (see below) in the early part of the year, the timing couldn’t be better for certain players to drop some really competitive offerings to capture dissatisfied DIY investors looking to switch or to diversify who they invest with.

Another interesting piece of news managed to cross our radar in the midst of all of the hubbub this week. A tweet from Rob Carrick indicated that the next Canadian discount brokerage rankings from the Globe and Mail are due to go live on January 20th. The upcoming rankings will be the 19th edition of the rankings and, interestingly, are being released in January rather than the end of the year. With a host of new features from Canadian online brokerages coming to market last year it will be interesting to see which online brokerage gets top honours – especially in light of recent developments and client service issues. If the last online brokerage rankings were any indication, look for the non-bank-owned online brokerages to get a favourable edge. Stay tuned! 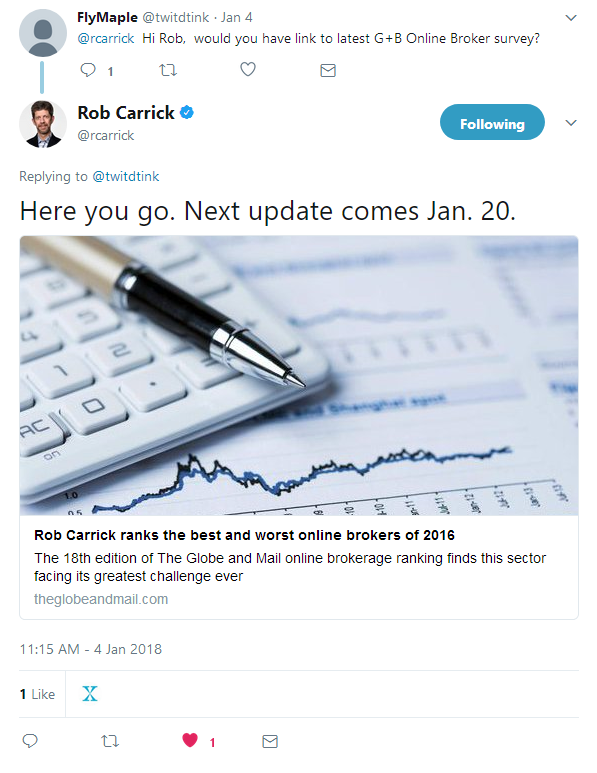 If you’re a Canadian DIY investor, you’ve probably heard about or experienced some of the madness taking place this past week. In the five years SparxTrading.com has covered Canada’s online brokerages and the thousands of tweets from Canadian DIY investors that we’ve covered, the first week of 2018 was simply unprecedented in terms of backlash from investors about trading platforms going down.

To recap, earlier this week both RBC Direct Investing and TD Direct Investing suffered significant interruptions to their trading platforms that resulted in many DIY investors being unable to place trades or access their account details.

Ironically, many investors saw potential profits go up in smoke, as enthusiasm over legalization of recreational marijuana in California translated into substantial trading volume of marijuana stocks on Canadian stock exchanges as markets opened. That increased volume coupled with a rush at the beginning of the new year was, apparently, enough to overwhelm online trading platforms at both RBC Direct Investing and TD Direct Investing.

Unfortunately, however, many investors were left seeing red as they were unable to connect to their trading platforms yet again on the morning of January 4th when marijuana stocks were whipsawed by the news that US Attorney General, Jeff Sessions, had rescinded the Cole memo, effectively throwing the investing community into a panic.

And, if there’s one thing about a panic that DIY investors ought to know, it’s that trying to get on the phone with a trading representative right away is nearly impossible. Cue the frenzy.

What arose from the following tweet was an avalanche of a reaction by DIY investors online. 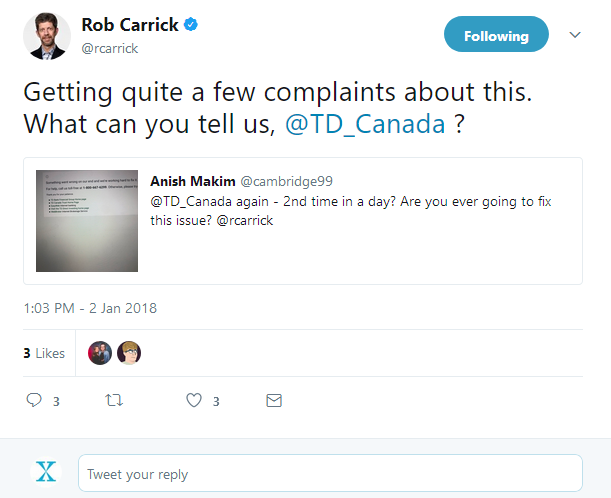 Hundreds of Canadian DIY investors impacted by the online trading platform outages took to Twitter to alert anyone and everyone who’s anyone in Canadian investing to the situation. Fairly quickly, news of the outage was picked up by the Business News Network followed by major Canadian news outlets including the Globe and Mail, Toronto Star, Financial Post, CBC and CTV.

The reaction online was visceral and the common theme among many of the complaints was simply this: how, given the billions of dollars in resources at the disposal of the parents of the Canadian bank-owned online brokerages, could trading platform outages a) occur in the first place and b) not be resolved quickly?

Putting the reaction of shock aside, there is likely no reason, short of force majeure, that would quell or even satisfy Canadian DIY investors. Even if the root cause could have been communicated, the bottom line was this: when the trades needed to be made, the platform was non-operational. To make matters worse, the backup system of calling into a telephone representative was not able to withstand the swell of volume.  As a result, frustrations mounted as investors were forced to wait in incredibly long (in many cases well over an hour) calling queues. Many simply gave up or had batteries run out. 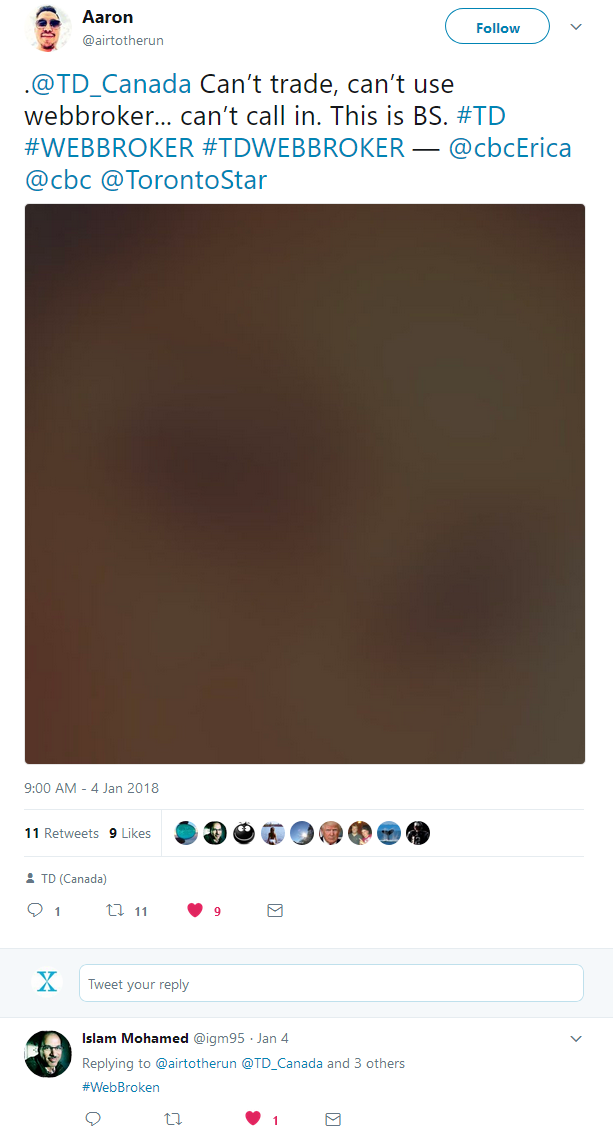 Again, we’ll come back to the point that we’ve covered thousands upon thousands of Canadian DIY investor tweets and platform outages are nothing new. They’ve happened countless times in the past, to almost all Canadian online brokerages, including to TD Direct Investing’s Webbroker and to RBC Direct Investing.

Never, however, have they managed to garner so much negative attention so quickly. 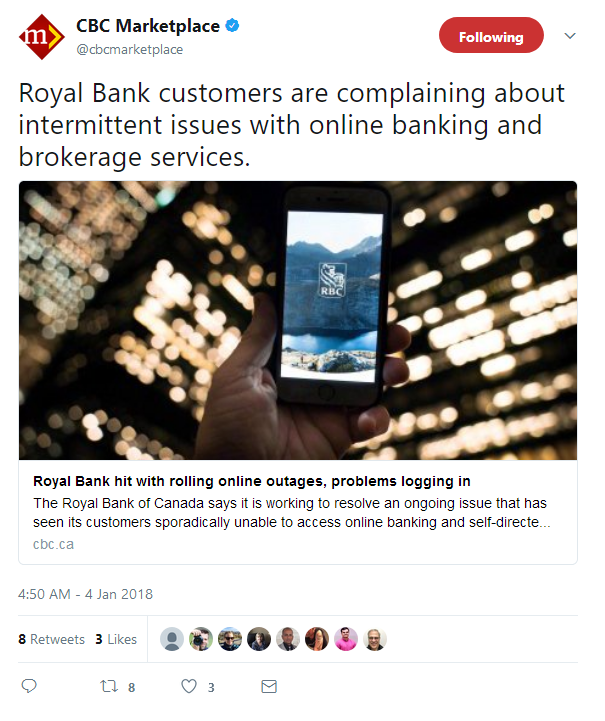 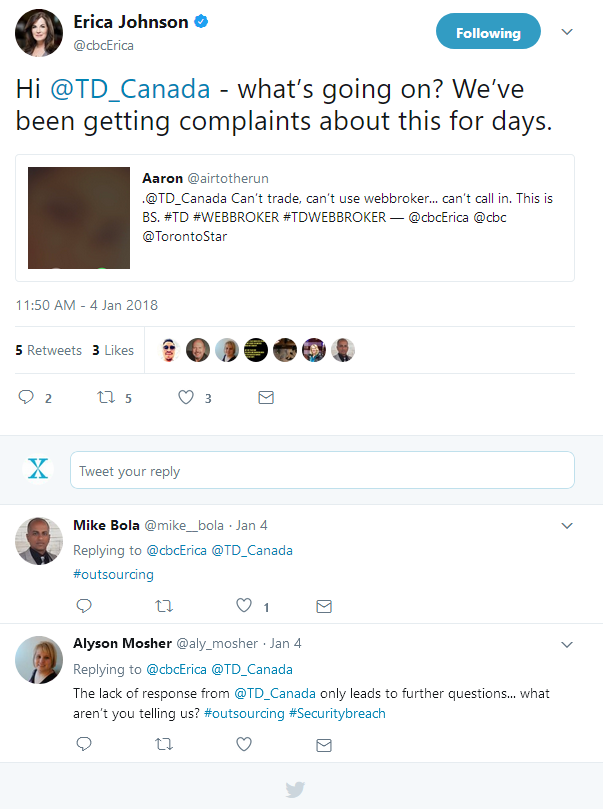 Keep in mind this was not a market crash (such as the flash crash or a massive unexpected event such as Brexit) so there was really no scapegoat here. Yes, the marijuana sector is incredibly popular, but does the volume of trading orders taking a system down pass the sniff test?

During the Facebook IPO in 2012, for example, there were so many orders placed that NASDAQ systems ground to a crawl. Yours truly had the indescribable angst of helplessly watching a buy order sit in limbo as stock price data danced around. That’s the kind of feeling and story that traders almost never forget.

So yes, even the most technically savvy investing and trading engines are prone to respect the laws of physics, however ultimately NASDAQ was forced to compensate many individuals who were impacted by system’s shortcomings. That a stock exchange would have to compensate individuals and firms impacted by a technology shortfall during an IPO was “unprecedented” – a word that has already been batted about to describe the volume that apparently took down trading platforms.

What happens next is still unfolding. We have yet to hear fully from the online brokerages as to what happened exactly and, perhaps more importantly, whether there is a fix in place to prevent it from happening again. Trading platform functionality has been restored but that is cold comfort to those DIY investors who were negatively impacted by the outages.

For many DIY investors, there have already been offers of free trades as some compensation for the inconvenience. While some investors may find that sufficient, there are many, apparently, who do not. Investors are coming together to demand more – with some even joining a Facebook group to explore their options. 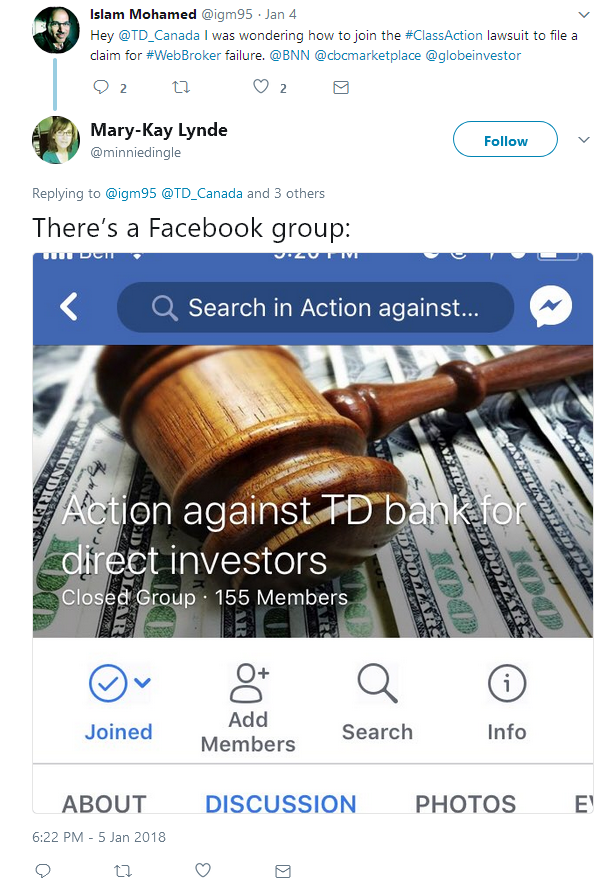 Another angle to this story that hasn’t yet been explored is the extent to which the structural integrity of online brokerages can impact the financial well-being of their clients. If Canadian self-directed investors can’t get into or out of their accounts, can’t access trading data or cannot close out a losing position because of technological outages, there could be a negative impact to their overall financial well-being. The CIPF only kicks in when a firm becomes insolvent, not when technology or architecture fall short.

Specifically, is there a conversation about being ‘too big to fail’ and technology ‘stress tests’ that financial watchdogs and regulators have to have with regards to online investing?

The modern and technologically-reliant trading infrastructure may be wise to institute benchmarks for trade handling – something analogous to the Basel III requirements for capital ratios – to be in place to handle retail investor order flow. Included in that would be a mandate to report trade platform stability,  trading bandwidth load capacity and failover requirements such as telephone representative availability.

Ultimately, the benefits of having many online brokerages in Canada is that DIY investors have choices in who they use. And, the kind of publicity arising from the events over the past week will almost certainly serve as a catalyst for technology upgrades and infrastructure development. Outages on volatile trading days not only hurt investors but also hurt online brokerages by preventing commissions from being collected. There’s clearly a business case in there that suggest that the technology will be repaired quickly. But will that be enough?

Perhaps the open question that will remain to be answered is how and when reputations and confidence in the online trading world will be repaired? With robo-advisors now in the mix, the Canadian online brokerages shouldn’t wait too long to provide solutions. We are, after all, in unprecedented times.

Here is a collection of tweets about the various outages this past week (scroll down to the full list of tweets from the week):

In the almost three years of collecting DIY investor tweets, this is by far the biggest week yet. Get comfy as this week mentions BMO InvestorLine, Credential Direct, CIBC Investor’s Edge, Questrade, RBC Direct Investing, Scotia iTRADE, and TD Direct Investing. Also while we usually filter out strong or inappropriate language, this week we’ve opted to allow most of it through to reflect the scope of impact of outages and wait times on DIY investors.

Out in the cold

In this post from RedFlagDeals.com’s investing thread, difficulties regarding access to TD Direct Investing started just before the new year and ratcheted up as outages became more widespread. An informative read on DIY investor experiences as the firestorm evolved.

Hurry up and wait

Another story that we’re tracking is the wait time for phone service at Canadian online brokerages. In this post from RedFlagDeals.com’s investing thread about CIBC Investor’s Edge, one user managed to find other online investors who were encountering longer than usual wait times.

Did I mention that it is only five days into 2018? Hopefully the weekend offers a bit of a break, but with cryptomarkets and the spreading fallout from the other ‘fire and fury’ it seems like there won’t be a whole lot of rest happening. On the plus side, all that worry and furious typing will be one way to stay warm. Have a great weekend!