So, the weekly roundup is back online. Unfortunate circumstances caused us to have to pause the roundup, but like any good trader, we’ve dusted ourselves off and are back in the saddle. And, now that we’re here, it’s time to catch up on quite a lot big news that’s happened in just a few short weeks.

In this edition of the we take a look at one bank-owned brokerage that has recently dropped their standard commission rates to a new low, potentially setting the stage for yet another wave of commission price drops. From there we’ll highlight some new features launched by several Canadian brokerages in a lightning roundup. Also, to get caught up on the conversations by DIY investors on Twitter we’ll be publishing the discount brokerage tweets of the week for the weeks the roundup has been on pause.

If there was any doubt about a price war among Canadian discount brokerages, that doubt was all but erased earlier this month as HSBC InvestDirect dropped their standard commission pricing from $9.88 down to $6.88 just two years after lowering them from $28.88. The days of the standard commission rates at $9.95/$9.99 are numbered.

With this latest round of pricing cuts, HSBC InvestDirect has now become the lowest cost Canadian bank-owned online brokerage for both standard commissions and, as of November 6th, also for active traders. Active trader pricing is slated to drop to $4.88 per trade for individuals who execute 150 or more trades per quarter.

The range for standard commission prices for standard equity trades at Canadian bank-owned brokerages now stands between $6.88 (HSBC InvestDirect) and $24.99+ (Scotia iTRADE), an almost 4-fold difference; even the difference between $6.88 and the current industry standard of about $10 appears to be substantial.

Perhaps the most surprising (or potentially unsurprising) outcome of this price drop is the lack of chatter online about this move.

HSBC InvestDirect is typically not as active with respect to marketing or advertising relative to other Canadian online brokerages. That, however, may soon change as their new pricing structure can garner instant attention and relevance for price-sensitive DIY investors.

Bank-owned brokerages outside of the big 5, such as National Bank Direct Brokerage with their commission-free ETF program and now HSBC InvestDirect are aggressively looking at winning marketshare through discounted pricing.

As word of this pricing drop will inevitably start to spread, and if HSBC InvestDirect should deploy an advertising campaign to let people know this is their new pricing structure, it’s safe to say that at least one of the larger players is going to have to respond in kind by lowering their rates – if not to match the $6.88 benchmark then to definitely go further. And, unlike National Bank Direct Brokerage’s focus on ETFs and relative concentration in Quebec, HSBC InvestDirect has a very strong presence in Western Canada, particularly BC, which could push directly against Qtrade Investor and Credential Direct – and of course TD Direct Investing – for marketshare.

One of the biggest challenges to HSBC InvestDirect, however, will be competing on a digital basis with other Canadian online brokerages.

From website user experience, content development/strategy, investor education, platform offerings, trading experience – in particular on mobile, there remain multiple areas in which other Canadian online brokerages have been investing in significantly over the past few years. As these feature sets come to be viewed as “standard” offerings, the value of lower-priced trading commissions will be offset by how convenient and stable the trading and account management experience is.

In the interim, it will be very interesting to watch what other bank-owned brokerages do in order to respond. Perhaps the easiest and most likely option for most online brokerages is to turn to a very compelling incentive offer (aka promotions). Whatever the case, DIY investors in Canada are bound to benefit which is great news.

Clients of Disnat Classic (a product of Desjardins Online Brokerage) which typically are considered to be the ‘investor’ rather than ‘trader’, now have access to a feature that can help monitor key investments in real time.

The Disnat Classic platform now enables up to 10 securities to be tracked in real-time with streaming quotes. For those who execute fewer than 10 trades per month (note the commission cost at Disnat Classic is $9.95 per trade) the data cost for TSX-only quotes is $30/month while those wanting TSX-V real-time quotes as well will be paying $55/month. 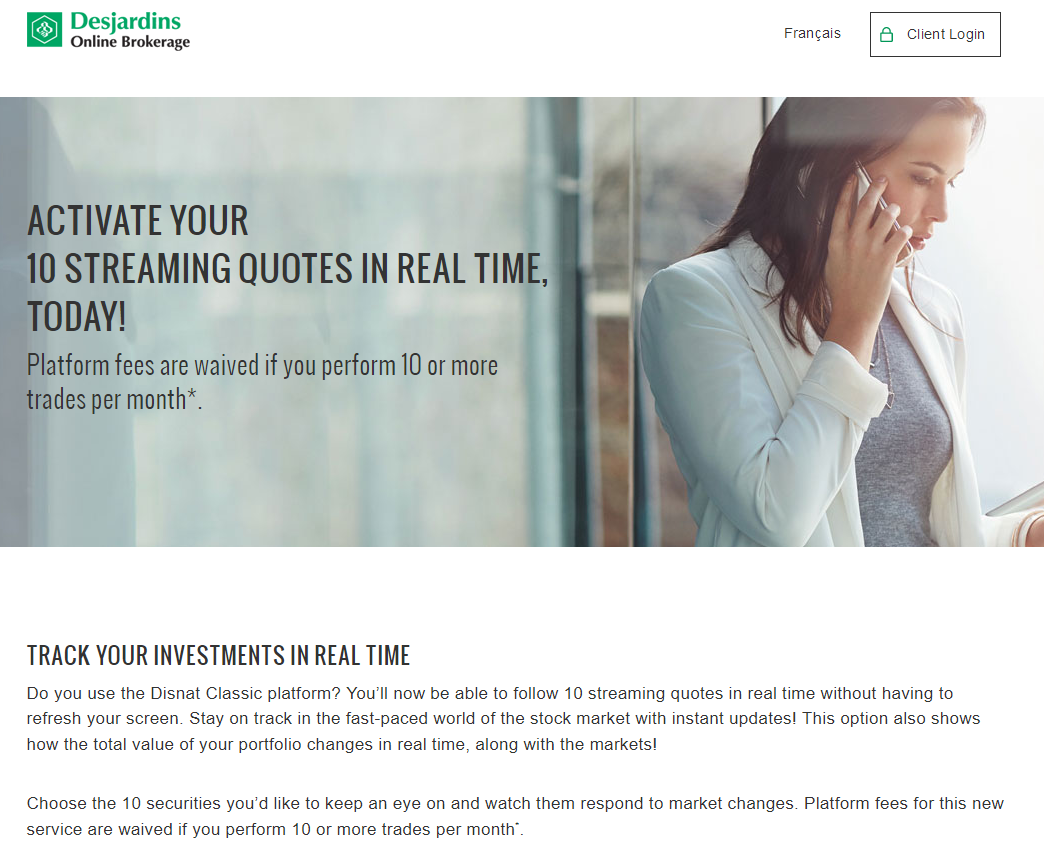 From a cost/benefit perspective the data cost for the number of symbols to monitor is quite high relative to other platform and data options available to DIY investors. Typically, browser based watchlists can track between 20 to 50 or more symbols in real-time so it is important to consider the need for real-time monitoring on a platform traditionally targeted towards less active investors.

That said, it is an interesting signal that enhancements to the platform experience for ‘investors’ are now available to edge them, albeit modestly, towards to the functionality used by traders.

Remarkably, in an industry (online trading) that relies on technology to the extent that it does and brands itself as technologically forward-thinking, the onboarding process at many online brokerages is still significantly dependent on manual, physical steps – all of which result in the process of opening an online brokerage account taking time measured in minutes and in some cases, days.

Some brokerages still require having to print out, sign and mail documents; others require visiting a branch in person while others now enable sign ups to take place entirely online.

It is against this backdrop that Qtrade Investor’s recent launch of online applications stands out as an important development for Canadian online brokerages. 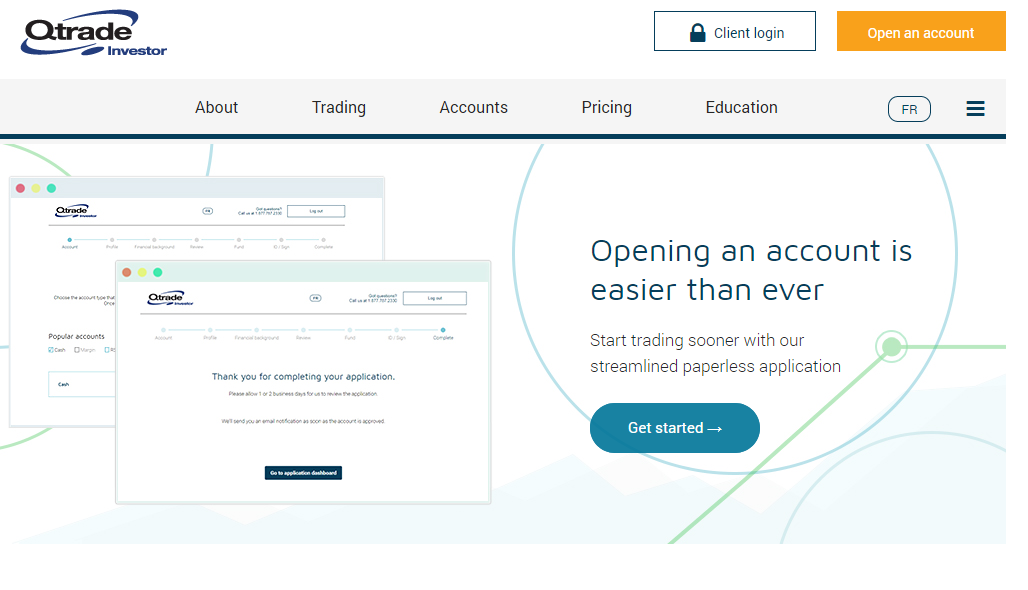 The process to open an online brokerage account via the web at Qtrade Investor is advertised to take 10 minutes – which is significantly faster than at most other online brokerages and definitely quicker than what it would take to go the print/send method.

We haven’t yet done a full walk through of the sign-up process so real-world results may vary. And, as seasoned DIY investors know, opening an account is just the first step in being able to get up and running; accounts also need to be approved and funded – both of which can add time to the setup process.

That said, the key takeaway for DIY investors is that Qtrade Investor is working harder to make getting started with online trading simpler and significantly faster – something younger investors will no doubt demand from any online brokerage. The advertised account opening time is more in line with a robo-advisor than a traditional online broker, again, likely a factor that considers the younger investor’s notion of what’s acceptable in terms of ‘waiting period’.

Stay tuned for more details on this feature as it is poised to be an important feature if it can live up to the benchmark claim of being able to open an online trading account online in about 10 minutes.

There’s quite the backlog of Twitter comments from Canadian DIY investors. Good thing the internet never forgets. Here’s a rundown of what was said over the past four weeks:

That’s a wrap on this week’s roundup. We’ve got some very interesting content coming over the next several weeks so continue to tune into SparxTrading or follow us on Twitter for updates on what’s coming around the corner.

To the loyal readers who have been waiting for the roundup’s return – we thank you for your patience and are looking forward to returning to our regularly scheduled program of keeping you up to date on the latest and most interesting developments in the Canadian online brokerage space.

Have a wonderful weekend!