Not everyone would look forward to turning 150 the way Canada does. That’s simply because us Canadians love to do things our way – including the Canadian discount brokerages and DIY investors. Of course, defining what ‘Canadian’ looks (and trades) like is quickly changing and gladly it looks like most Canadian online brokers are keeping up with the times.

There’s all kinds of excitement in this week’s roundup. Starting first with a shiny new website for one of Canada’s non bank-owned brokerages that showcases a more human approach to the world of finance. From there, at least one Canadian online brokerage decided to celebrate Canada turning 150 by offering up a great deal to DIY investors, because who doesn’t love a deal? Though it’s a tough act to follow, there are also interesting tweets and forum chatter that illustrate Canadians love to talk about DIY investing (and most of them are pretty polite!) in the tweets and forum roundups.

It may have taken some time, but Credential Direct has officially rolled out its new website this week. Gone is the dated version of their website, a remnant of the features and priorities of the mid 2000’s and in its place, a modern layout as well as some interesting new features. In their own words, the new Credential Direct site is “simple, smart and so, so pretty” – for the most part we’d have to agree.

Having covered (and even participated in) a number of different website upgrades and refreshes from Canadian online brokerages over the past three years, taking on the project of replacing a website is no easy feat.

In 2017, a ‘modern’ website – especially one for DIY investors – has to be aesthetically pleasing and seem ‘contemporary’ on the one hand, but also render and behave well across different screen sizes and consider user interaction that accommodates existing clients as well as possible new clients.

Credential Direct’s new website is clearly a radical overhaul from its predecessor. Aside from some of the more obvious changes, however, there is also a significant branding and messaging evolution that the new website brings with it. With so many drastic changes, there’s lots to speak to. That said, here are a handful of the observations about this updated website that we found to be most interesting.

One of the first things that jumps out about the new website is that the typography and styling of the text has been simplified and harmonized. While that might sound a bit like design-jargon (and it is) the decision to use a consistent colour and font means that the site instantly feels less busy than the version before it. Information is clearer, easier to read and has been broken into “essential” elements. In this case, less is definitely more.

Of course, anyone who has had to design a website knows that there are literally hundreds if not thousands of small decisions to make when it comes to organizing the information.

As we had reported in April, the design decisions, in particular around information organization, were helped along by a survey that helped test how users would interpret different menu headings and information tasks.

In that light, it is interesting to note that the new navigation puts a focus on platforms ahead of pricing, the latter of which is the most influential component of the value proposition for DIY investors. Not that information on pricing is hard to find. For users who scroll, pricing is the first thing under the header image that appears.

Fortunately, most of the information in the new site is easy to find for individuals looking to learn more about the Credential Direct experience, so the menu navigation choice was a curiousity. Of course, it is likely that with the new website, there will also be more measurement and testing, and as such, the new menu ordering is going to evolve based on data rather than being ‘carved in stone’.

Another thing that features prominently is the imagery of the people.

In a savvy design and marketing move, the new website places a strong emphasis on people but then goes a step further to name them and humanize the experience of learning about Credential Direct.

Going with pictures of people instead of icons is a bold move, and certainly not without some risks. Credential Direct’s decision to use personas and images that break the mold of what an investor typically looks like, is in keeping with a trend in financial services generally. It is particularly encouraging to see the diversity in imagery choices, with pictures of women investors, investors of different age groups and various ethnicities – something that is a welcome departure from the world of investing imagery in the 2000’s.

In fact, for anyone who’s had to look at thousands of stock photos to decide on what images to use, however, the choices of imagery were also smart and interesting.  Credential Direct’s design team did not fall back on stock photos of individuals with calculators and papers sprawled everywhere struggling to understand their statements. Instead they managed to find everyday people doing everyday things. And, it is unlikely these same photos showing up in other people’s marketing materials, especially online brokerages. Kudos.

Of course, the persona-based approach still breaks the world down into three main categories – novice, intermediate and expert investors. In this case, however, the categories have names and stories. So Susan (novice), Raymond (intermediate) and Nadira (expert) are much more approachable than just category names. Further, clicking into the particular personas, the “features” are branded as the individual’s “favourite features.” In this way, reading about investing with Credential Direct feels more like a story than a sales pitch. 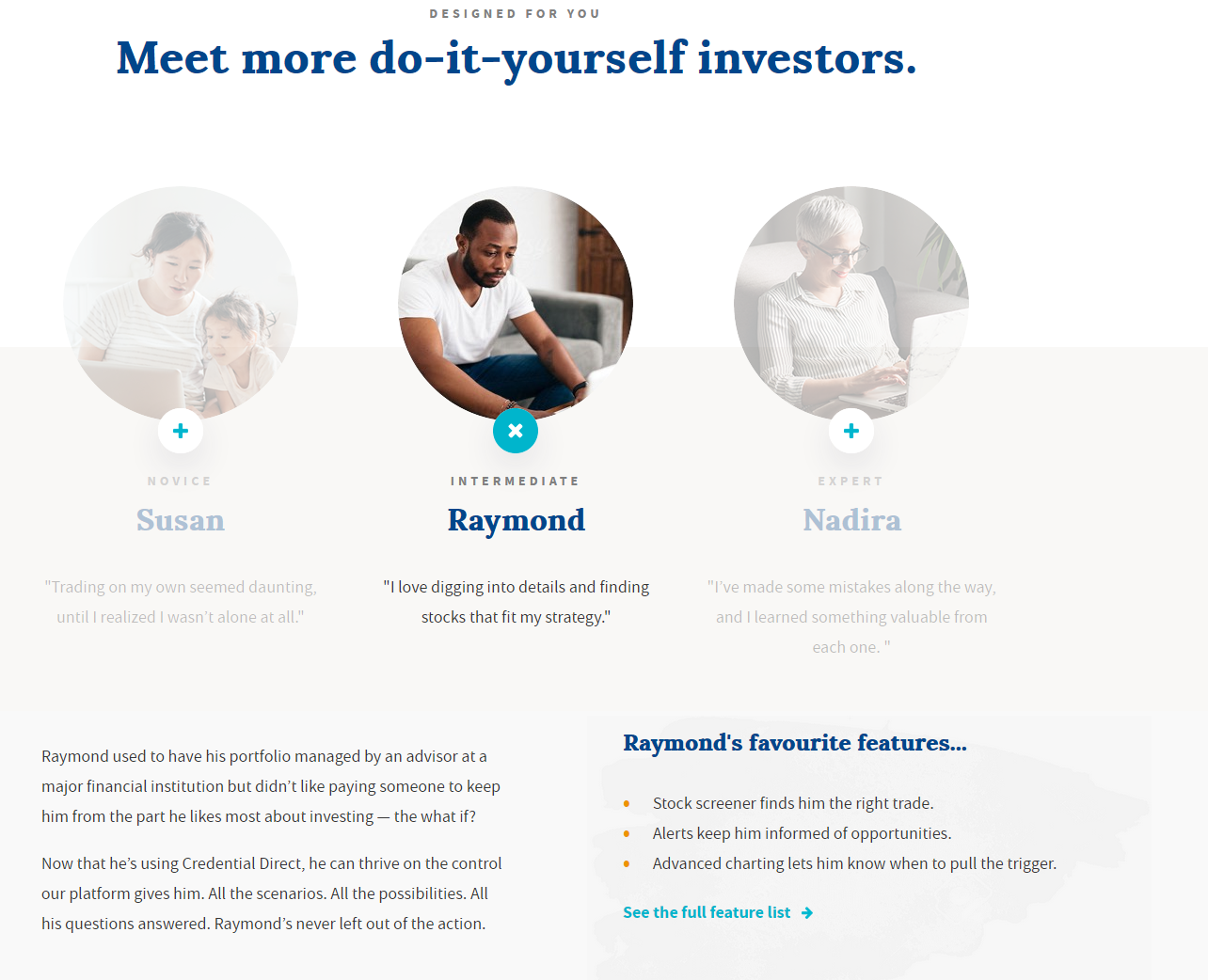 Of course, the website refresh is one in a list of many big (and sometimes small) digitization efforts from Credential Financial (the parent/owner of Credential Direct). For example, a robo-advisor is on the list of things that will be launching – itself no small project. Despite this latest move with the website, and all of the work that went into it, there is still some ground to cover to become ‘cutting edge’.

For example, one of the first hurdles to overcome is the ability to open an account online. Despite the current setup of the website and the efforts they’ve made to simplify the process, individuals looking to open an account with Credential Direct still need to be prepared to print, sign and send paperwork and wait.

The second is carving out a section for promotional offers or deals. Credential Direct’s previous site did have a section for special offers but the new site does not. Given where Credential Direct sits in terms of market share and general awareness, if they’re hoping to grow their client base, promotional offers are almost a must, so it will be interesting to see how and where they call attention to this in their new design.

Finally, there’s investor oriented content. Credential Direct has reorganized much of their existing ‘investor’ content and the new addition of a section called “The Ticker” seems promising, but other Canadian online brokerages – especially close competitors, have fully embraced content production into their offering. Out of the gate, Credential Direct’s first post on their “Ticker” section was dated April 2017 and discussed the launch of their new website. To compete with their peers, Credential Direct will have to find more to say, more often and in more depth.

From a design perspective, the new Credential Direct website does deserve to be called pretty. For DIY investors or traders, however, personality has constantly proven to be more important.

Specifically, ‘personality’ comes in the form of product functionality and bold thinking (aka innovation). The front-end is a good start but it might be secondary to pricing, actual ease of finding the right information and operating an account.

While Credential Direct can feel good about their latest site roll out, the industry around them is moving very quickly. So, when it comes to innovating and getting ahead of their competitors, the thinking and features, like the type and font of their new site, must be bigger and bolder.

With a new month and new deals literally around the corner, there’s already action on the deals front to report.

This offer by Qtrade Investor is yet another commission-free ETF promo that has come to market. Earlier this month, Virtual Brokers launched two new deals, one of which was also a commission-free trading offer for US or Canadian ETFs.

And, while Qtrade Investor is one of five Canadian discount brokerages with some kind of commission-free ETF program (Scotia iTRADE, Questrade, Virtual Brokers and National Bank Direct Brokerage are the others), this latest deal might be a signal that ‘commission-free’ trading continues to take root in Canada. For the moment, it appears to be in the form of ETFs rather than in equities generally but trends seem to be pointing in the commission-free direction.

On the downside, with the roll out of Credential Direct’s new website, it appears that the links to previous offers are no longer working, an indication that perhaps these deals are no longer being offered.  The specific offers in question were the ‘special offer’ of a discount for the Trend Micro antivirus software and, more importantly, the transfer fee coverage offer. We will watch to see if one (or both) of these offers were just lost in the shuffle or if they’re going to stage a comeback soon.

Bank-owned brokerage or independent? It’s a popular question with DIY investors deciding between the convenience of banking and the pricing of free ETF buying at Questrade. Find out what one DIY investor learned by asking redditors in this post from the reddit Personal Finance Canada thread.

Norbert’s Gambit, the infamous maneuver to convert currency without having to incur the regular currency exchange fees, was the topic of this post on reddit, where one DIY investor was looking for guidance on how to do this at TD Direct Investing with an interesting fund choice.

That’s a wrap on the week, the month of June and the first half of 2017. Canadian markets are closed on Monday but anyone trading actively in the markets is undoubtedly going to be watching what happens come opening bell in the US. Of course, for those who are actually long on the long weekend, have a safe and fun Canada Day weekend! Cheers to Canada turning 150 in style and to another 150 equally eventful years ahead!