Drama. It’s what draws viewers into reality TV and it’s what reality TV producers and those in the entertainment world know how to harness – the innate human tendency towards uncertainty. Funnily enough, financial markets aren’t that different either, with human reactions (and aversions) towards uncertainty playing out almost daily. Interestingly, Canadian discount brokerages are also trying to figure out how to harness the tendencies to avoid emotional decisions as well as the tendencies to be moved by them.

In this week’s roundup, we go part-robo with the rundown of Canadian online brokerages who’ve ventured into the automated/digital/robo-advisor space, and the incentives that are being offered to win new clients. From there, we take a more social turn to tell a tale of two online channels by looking at the social media activity from a pair of Canadian discount brokerages. Of course, as always, we cover the full scope of DIY investor chatter with a summary of online investor tweets and a few interesting posts from the DIY investor forums.

This month, one of the (if not the) leading robo-advisors in Canada just reached a crucial milestone. Wealthsimple, the flagship robo-advisor that is building their brand with a combination of star-power, zeitgeist and deep-pocketed backers, added to their celebrity status by having Canadian Prime Minister Justin Trudeau pop by their offices as they crossed the $1B AUM (assets under management) marker. 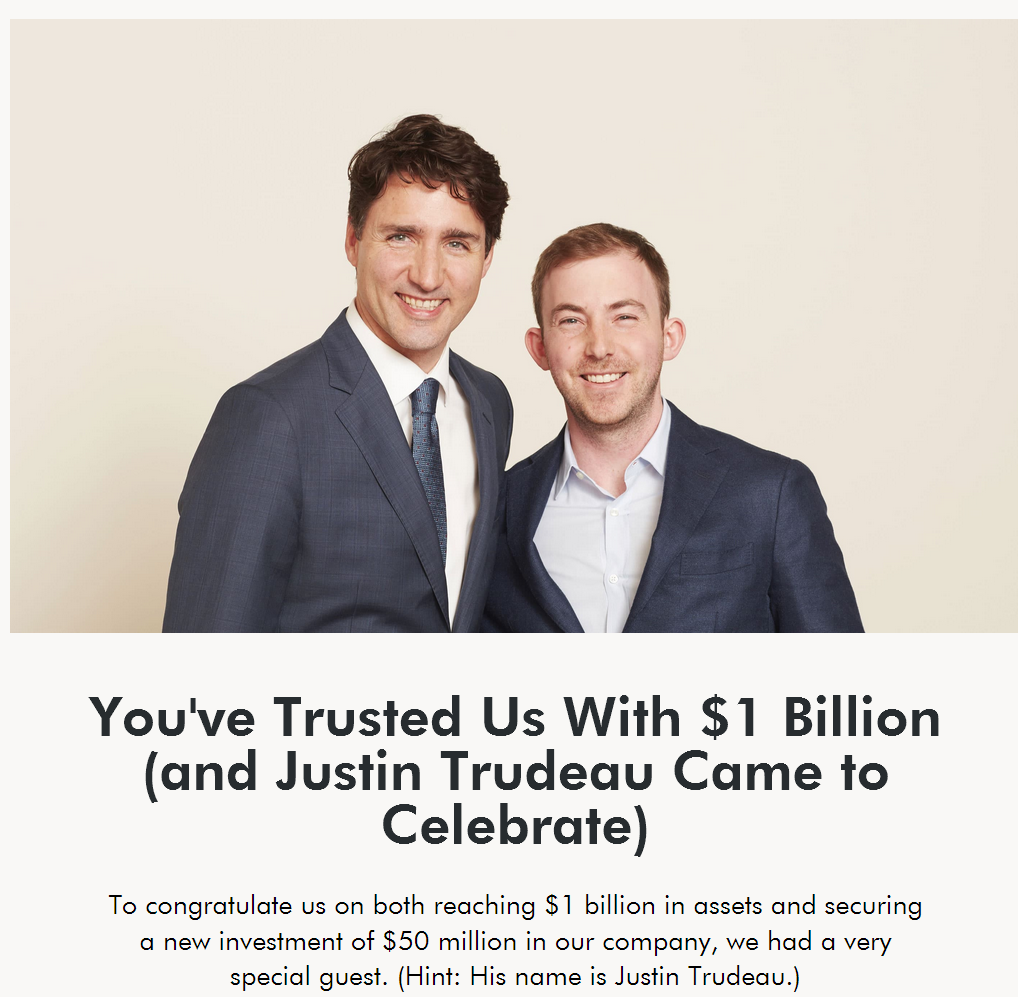 Without question, Wealthsimple and their peers – the independent robo-advisors, have shaken the wealth management tree in Canada. Over the past three years, the robo/digital advisory landscape in Canada has mushroomed from nothing to just over a dozen firms competing in this space. And, on either side of the robo-advisor industry are a long list of financial services firms who are not going to quietly give up market share or mind share to these newer entrants.

One of the interesting challenges that ‘digital advice’ products such as robo-advisors face in the Canadian investment landscape is carving out enough of a presence to make them a profitable and sustainable enterprise. As yet, there hasn’t been a vicious price war among robo-advisors but that may soon change thanks to recent moves by Canadian online brokerages.

On the DIY investor side of the spectrum, there are now at least four Canadian discount brokerages (or their parent brands) who’ve deployed some kind of digital advice/robo-advisory service. These providers (and their services) include:

No stranger to competition, the brokerage-associated robo-advisors have gone on the offensive launching promotional offers to draw investor attention. Specifically, this month NBDB’s Investcube launched a cash back offer and BMO SmartFolio’s launched a no advisor fee introductory management offer, both of which will rattle the cages of more than a few Canadian robo-advisors.

Starting first with BMO SmartFolio, there is now a promotional offer for new clients which enables the first $15,000 of assets to be managed with no fee – specifically no advisory fees, for up to one year (until the end of September 2018). For amounts over $15,000 the regular advisory fee schedule rates apply. Currently there aren’t that many similar types of fee waiver promotions for deposits of that size. Interestingly, this asset level appears to appeal to beginner investors or to those who are curious about the SmartFolio experience.

[*disclosure note: SparxTrading.com has a referral program in place with BMO SmartFolio and may receive compensation for individuals opening a SmartFolio account with code STSF and/or clicking through to the SmartFolio website]

For National Bank Direct Brokerage, the Investcube product isn’t a typical robo-advisory although it often is described as such. Nonetheless, the automatic rebalancing features and ‘hands off’ appeal to investors put Investcube’s pre-built portfolios up against those of the more recent robo-advisors. Earlier this month, NBDB launched a tiered-cash back promotion that offered between $50 and $600 for new and existing account holders.

A tale of two tweets

After a number of months of relative quiet from Virtual Brokers on social media, the Virtual Brokers Twitter account appears to have come back to life with tweet activity picking up over the past few days.

While it is still early, this uptick in activity coincides with addition of bandwidth in the client service arena. Specifically, Virtual Brokers recently added resources to their phone service by opening a call centre in Montreal.

As any longtime reader of the weekly roundup will note, however, the presence of a Twitter account also opens up a service channel directly with an online brokerage.

In the past few months, Virtual Brokers has been receiving tweets and responding, albeit after a longer period of time than what the channel typically demands. So, to see not only customer service tweets but also a ‘general interest’ topical tweet emerge from the VB Twitter account is a sign that perhaps additional resource has been allocated here as well. 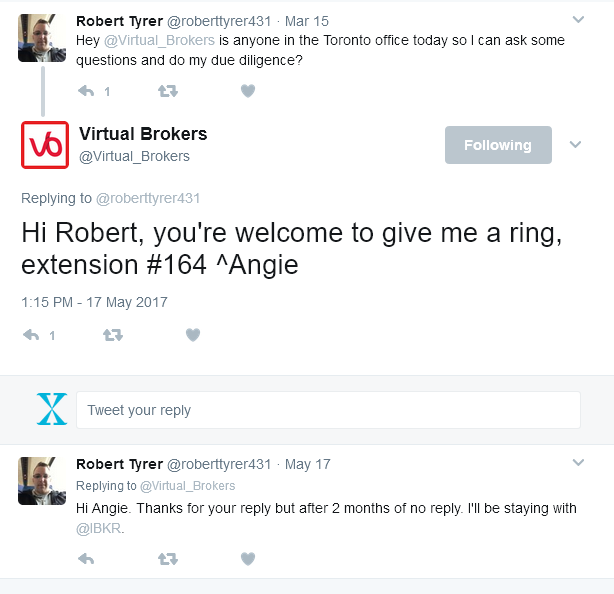 While being on Twitter is not without its growing pains, a reboot is still better than radio silence. From a strategy point of view, it will be interesting to see what kind of content will be coming from VB and the kind of traffic/response it receives as a customer service channel as more DIY investors (and VB clients) also start to take note of the uptick in activity.

Earlier this week, Scotia iTRADE held a promo to drive traffic into their investor centre in downtown Toronto. Instead of coffee or ice cream, this time it was popcorn and SCENE points. Specifically, Scotia iTRADE appeared to be offering up 2000 SCENE Points (which could land two general admission movie tickets) for a $5,000 deposit. This offer is open until June 15, 2017. 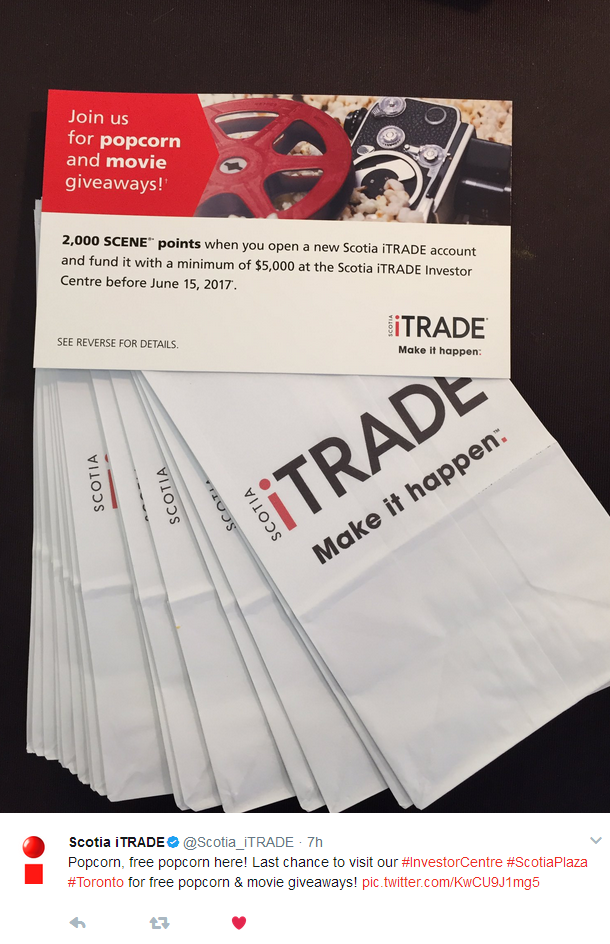 As good as the popcorn may sound, however, it should be noted that at the deposit level of $5,000, there may be a quarterly fee of $25 that applies (the $25 per quarter fee is waived if, among other conditions, there’s at least $10,000 in aggregate account value) as well as standard commission rates of $24.99 per trade which are worth considering. The minimum account balance to receive the better trading commission rate of $9.99 per trade is $50,000.

If SCENE points are your thing, there is an existing offer which starts at deposits of $25,000 and can provide 50 free trades and considerably more SCENE points.

Once again, Scotia iTRADE is taking advantage of its parent Scotiabank’s association with the SCENE points program to be able to offer up this ‘free movie’ perk for signing up for an online brokerage account.

In addition to the promotion itself, there were also two other interesting observations. First, the deposit level for opening an account and qualifying for a promotion had been lowered to $5,000 – which is significantly lower than their current (or usual) set of offers. Perhaps this lower hurdle for an offer might be a signal of a coming shift in either the pricing or requirements to hold a Scotia iTRADE account.

The second observation of interest was that, unlike some previous campaigns, there wasn’t any uptake of this event on Twitter (at least under the hashtags associated with iTRADE or this promotion). There was, however, some visibility on Instagram by an iTRADE marketing manager which showcased members of the iTRADE team in action.

In terms of keeping up on social media, perhaps this is also a signal that branching out into yet another social channel is necessary to get exposure and engagement that isn’t happening on Twitter.

The markets weren’t the only places where volatility could be found – DIY investors also had some volatile comments of their own for a few brokerages this week. Mentioned on Twitter were Questrade, Scotia iTRADE, TD Direct Investing and Virtual Brokers.

If you’re wondering if robo-advisors have struck a chord with the Canadian investor community, especially the millennial crowd, look no further than this post from the reddit Personal Finance Canada subreddit. While the Canadian Prime Minister and robo-advisors are lightning rods independent of one another on most days, when they combine, there was an undeniable reaction.

For one iTRADE customer, saving for their children’s education was top of mind in this post from RedFlagDeals’ investing forum. Find out what one user learned when asking how to set up a family RESP with Scotia iTRADE.

T.G.I.F. The long weekend is finally here and although it could end up feeling much longer if you happen to watch any news, the ‘good news’ is that the weather in most of the country makes it much easier to peel away from a screen and enjoy the outdoors (or stick to a screen and cheer for the Sens!). A reminder that Canadian markets will be closed on Monday for Victoria Day, not that that will stop the die hard traders from looking at the US markets for trading opportunities or a cue on how to kick-off on Tuesday. Have a safe and enjoyable long weekend!