Even though March is over, it still doesn’t quite feel like the madness is behind us yet. Nonetheless, housing prices (in Toronto) and stock markets are still buoyant, and are managing to keep up appearances. For investors & discount brokerages, it seems the old farmer adage stands: make hay while the sun shines.

In this edition of the roundup, we look at the deals and promotions turnover set to take place across the board as we head into a new month. From there, we’ll review the latest security feature from a Canadian bank-owned discount brokerage that leverages voice biometrics. As always, we’ll look at what DIY investors had to say on Twitter and wrap up the week with a couple of interesting forum posts.

After the madness of the RSP contribution season, a rally in the stock market, and rumblings of interest rate increases, it appears as if the landscape for online brokerages is due for a bit of a shakeup.

As we head into a new month, it is already clear that there will be a great deal of change on the deals & promotions front with at least six offers officially set to expire at midnight. Interestingly, deals from National Bank Direct Brokerage, CIBC Investor’s Edge and Scotia iTRADE were pulled from their websites in advance of the official calendar roll over.

The transition from March madness to April (sadness?) is not unusual. Last year, the shift from March to April saw the deal count fall 42% from 33 offers down to 19, with most of the offers disappearing from the cash back/free trade category. The deal count through March of this year reached close to 30 before pulling back slightly with the expiration of deals from Credential Direct, Qtrade Investor and HSBC InvestDirect.

One curious observation this year is that online brokerages have removed offers from their website in advance of the calendar roll over. Typically these deals last through the last day of the offer, even sticking around a few days after the deal has expired.

It’s not quite clear what this means for publication of new offers, however it seems that brokerages are being slightly more responsive than they have been previously. Also, it is curious to note that, at the time of publication, there were no longer any promotional offers or deals listed on the Scotia iTRADE special offers section. Scotia iTRADE has been staple of the deals race for a very long time, so it will be interesting to see if they populate their deals section again soon or if this is a signal of a change in strategy.

We will continue to monitor the deals & promotions section heading into April, especially since the landscape for DIY investors’ choice of promotions keeps shifting. With several ‘coming soon’ features announced by brokerages (including one described below) there may be a convenient promotion to accompany new feature releases.

List of some of the brokerages and deals expired as of March 31st:

Whether it’s Siri, Google or Alexa, there’s no question that voice recognition is playing a greater role in the day to day lives of consumers. Now, it appears, it will do the same for DIY investors.

Voice recognition technology has typically found its way into the financial services world as a means to replace users having to push numbers on a keypad to navigate, but now it is possible for this technology to verify the identity of who’s on the line.

An announcement posted on the CIBC Investor’s Edge website indicates that voice recognition biometrics will soon be integrated into the customer service experience at one of Canada’s bank-owned online discount brokerages. Instead of fumbling about with passwords, PINs or security verification questions, individuals who are in a hurry will simply be able to rely on a ‘voiceprint’ for security authentication.

How much time can be saved using voice biometric login? Quite a bit, it seems. A recent study of voiceprint-based biometric authentication from Citibank’s Asian Pacific region found that the average time to validate a client’s identity dropped from 45 seconds to 15 seconds using this new technology. In a world where user experience online demands web pages load in fractions of a second, it’s easy to see why making the case to shave the telephone authentication experience down makes sense.

Another improvement to the telephone experience CIBC Investors Edge users will enjoy is being able to schedule a call back instead of waiting on hold. 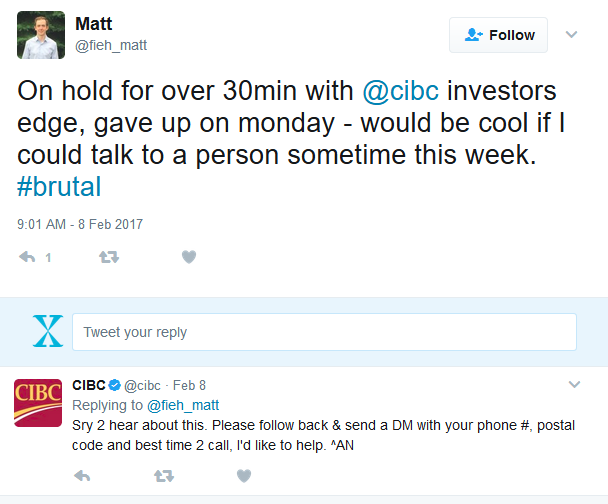 Granted, it seems like a small improvement, but for impatient traders or investors who would rather listen to the market news instead of hold music (or hold commercials), the call back feature is a godsend and will make scenarios like the one mentioned above a thing of the past. Of course, while call backs are preferable, how long it takes for an agent to call back is another matter entirely.

The announcement page for this new feature also has compiled a useful list of questions, including what should happen if voice authentication does not work or does not allow a user in.

This latest feature announcement, while not revolutionary, is still evolutionary and helps to exemplify that the bigger bank-owned discount brokerages are not standing still when it comes to innovation. When it comes to deciding on how to improve consumer experience as an online brokerage, this one seems to be a good call.

If there’s a rule to social media and discount brokerages, it’s that when things break, you’ll hear about it on Twitter. Mentioned this week were BMO InvestorLine, Disnat, Questrade, Scotia iTRADE, TD Direct Investing & Virtual Brokers.

DIY investors are always on the lookout for a good deal. In this post, from reddit’s Personal Finance Canada, one DIY investor looking for a better way to convert between USD & CAD found a good tip to consider at a popular online brokerage.

Without meaning to, the Q-named Canadian discount brokerages are often mistaken for one another. In this post, however, one user had narrowed the field down to choosing between Qtrade Investor and Questrade. More instructive, however, is the response on this channel that Questrade managed to provide.

That does it for another week in the markets. Assuming that nothing totally crazy happens on Twitter this weekend, enjoy April Fool’s Day, the start of spring training and celebrating the successful launch (and return) of the SpaceX rocket. For a head start on April Fool’s pranks, here’s a fun rundown of them.