Did someone say rally? While the Trump news cycle is on full blast, a funny thing has been happening in financial markets in the US and Canada – they’ve been going up. Despite the many sounds of alarm that are being rung by newscasters and analysts everywhere, the fact that financial markets are rallying in spite of it means that investors are clamoring to get into markets, at least for now.

For Canadian discount brokerages, the past week also showcased some very interesting maneuvering. In this week’s roundup, we’ll take a look at one major online brokerage that is banking on international opportunities. Next we take a look at another bank-owned brokerage that is sending one its platforms into early retirement. From there we’ll take a quick scan of what DIY investors had to say on Twitter and round out with a look at chatter in the investor forums.

CIBC Investor’s Edge now appears to have some very grand global ambitions. One of Canada’s big bank-owned discount brokerages took a very bold step with their latest feature: the ability for clients to be able to hold not just US dollars but six other foreign currencies as well. On the list of foreign currencies are Euros, British Pounds, Swiss Francs, Australian Dollars, Japanese Yen and New Zealand Dollars, all of which can be held in both non-registered and registered accounts (except for RESPs).

In a year in which equity markets are sure to be impacted by uncertainty, there are many who are looking to foreign currencies for trading opportunities, so the timing of this new set of features is, for some investors, spot on.

By all accounts (pun intended), this is a major score for CIBC Investor’s Edge and their clients.

Starting first with the fact that adding the ability to settle trades in US dollars in a registered account means that there are no more messy conversion fees to deal with (unless you want to of course). In addition, clients can also receive dividends, interest and other distributions in US dollars – something not all bank-owned brokerages offer the ability to do.

While CIBC Investor’s Edge may not be the only bank-owned brokerage to work in multiple currencies (HSBC InvestDirect enables trades to settle in foreign currencies but does require conversions), they are the only major Canadian bank-owned brokerage to enable clients hold the currency itself in a registered or non-registered account. So, not only can individuals have a USD RRSP, they can also have cash in one of the six other currencies in a registered (or non-registered) account also.

This latest move by CIBC Investor’s Edge will certainly get the attention of their bank-owned brokerage competitors as well as independent brokerages, most of whom do not offer currencies other than USD to be held in a registered (or non-registered) account. So, in terms of differentiation, this definitely hits the mark.

Another reason why this move is bound to make a splash is because there are no extra fees associated with the multi-currency account – again not something other Canadian brokerages are offering for free.

Over the next few weeks there will almost certainly be more chatter and clarity that emerges as savvy DIY investors digest how to take advantage of the volatility in the US markets as well as in markets across the world. In the meantime, there are a few questions that are bound to arise now that CIBC Investor’s Edge is wading into the world of multi-currency accounts, such as whether the minimum amount to waive administration (or account maintenance) fees being charged on the account would be in the currency of the account (i.e. 25,000 euros to waive administration fees in a registered account) or the Canadian equivalent.

Of greater intrigue, however, is that if multi-currency accounts are a reality, does this then set the stage for CIBC Investor’s Edge to open up more formally to international trading? A speculator can certainly wish.

Retirement is on the minds of lots of folks at this time of year and for many it’s still a long time away. But, for Scotia iTRADE iPad app retirement is right around the corner.

After announcing in late 2016 that the iPad app would be discontinued some time in early 2017, this past week on social media Scotia iTRADE broke the news to a disheartened user the app’s days are quite numbered. 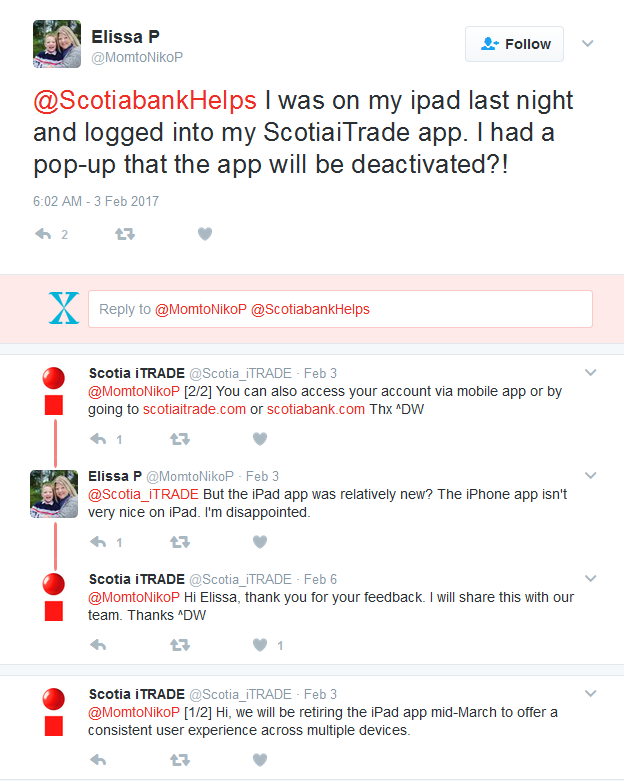 To @MomtoNikoP’s point – it’s hard to believe that the app itself has been around for about 4 years already. Unfortunately for technology, that is quite a long time.

Of course, in dealing with older technologies or deciding how best to adapt to changing needs of clients, online brokerages have to continuously wrestle with just where to allocate their technology resources. Sadly for the tablet app, it didn’t make the cut.

While there is appeal to using a tablet, perhaps this move by Scotia iTRADE is a signal of the realities of DIY investor behaviour. One of the most important benefits of trading or researching stocks on a tablet is screen real-estate. Rather than having to squint, pinch and zoom, researching charts or reading quarterly reports is easier on the eyes on a tablet than on most smartphones. The catch is, however, most people have smartphones and would rather use those devices than tote around or hold up a bulky tablet.

Also from a user experience point of view, investors ‘on the go’ that want to monitor, and even execute, transactions can work with data in small tables and can probably get away with using a smartphone. If you’re likely to be at a place where you can use a tablet, there’s a good chance you can probably use a laptop. Also, laptops are now lighter and more powerful than they’ve ever been, so for the DIY investor that needs a bigger screen, the ability to use a keyboard and a mouse make relying on the tablet a hard sell.

So, while there are users of tablet-specific apps that might relish in being able to go seamlessly from device to device, the latest move by Scotia iTRADE shows that tablet-specific apps might end up getting the swipe left as most DIY investors choose between either laptop, desktop or smartphone.

For the deal hunters among us, this latest thread on Red Flag Deals throws some love our way and also shows that there are more than just the advertised offers we have listed in our discount brokerage deals section – there are sometimes targeted offers in play too.

Dividend reinvestment plans (aka DRIPs) are a popular strategy for many investors to build wealth over the long term. In this post, also from Red Flag Deals, one investor was learning some important lessons on how dividends get issued and reinvested in the wild.

That’s a wrap on another crazy week. For those on top of this rally, there’s definitely a reason to cheer heading into the end of the week. Of course, how long to hold on for is anybody’s guess at this point – to quote a famous frog, ‘it’s not easy being green’. Have a great weekend and stay warm!