If there was any doubt that winter is coming, it’s pretty much been buried at this point underneath a pile of snow. The infamous game of thrones reference seems more appropriate than ever, not just for markets, but also for the tough times to come for Canada’s discount brokerages.

In this week’s roundup, we take a look at the most influential brokerage ranking of the year and what it signals about the Canadian discount brokerage landscape. From there, we’ll take a look at the second roundup of roundups from 2016 and then close out with some interesting tweets from the week and investor forum chatter.

This past week, the 18th (yes that’s right) annual discount brokerage rankings were published by Rob Carrick at the Globe and Mail. It’s an amazing milestone, even more so considering how much of the online world has changed over that span of time. Ironically, change, or lack thereof, happens to be an interesting theme when looking at this year’s results and when evaluating Canadian discount brokerages.

Before looking at the big picture, let’s recap the results.

This year’s results saw Qtrade Investor and Virtual Brokers both achieving the highest letter grade, an A, resulting in a tie for ‘the best’ online brokerage in Canada whereas HSBC InvestDirect once again earned the dubious distinction of coming in last. Interestingly, the results from this year’s rankings are largely the same as past four rankings going back to 2013 (see table below) this despite substantial changes in pricing, features, websites, and trading platforms across the industry.

On a year-over-year basis, letter grades improved for CIBC Investor’s Edge, Desjardins Online Brokerage, Qtrade Investor and RBC Direct Investing. Dipping slightly was Questrade, who fell to a B+ from an A-. Nonetheless, Virtual Brokers and Qtrade Investor have remained the clear favourites for Rob Carrick’s rankings for four years running, owing in large part to the curb appeal for “everyday” investors.

For Qtrade Investor, this has been a big year for awards as they’ve landed top scores with MoneySense’s ranking, Surviscor’s ranking and now the Globe and Mail ranking.

In keeping with years past, there was the combination of commentary on each of the brokerages, much of it colourful and pulling no punches, as well as commentary on the industry as a whole.  In addition, there was also a table containing forty features of a “great” discount brokerage.

First, for any long-time follower of the rankings, this iteration felt leaner than years past. It’s true that the style of writing has shifted to become more concise and digestible (a deliberate appeal to millennial readers and the tl;dr generation) but there  are a number of features, such as screenshots, extra comparison tables and analysis that were not present this go around.

The second very interesting observation was the tone of this year’s rankings. While it’s generally difficult to get very excited over financial services, this year’s online brokerage rankings felt particularly grim with Carrick stating “The old binary world of full-service and do-it-yourself investing is dead.”

These are very strong words coming from one of the most influential voices in the Canadian personal finance space, and certainly should give pause to Canadian online brokerages. For 17 versions of the rankings things have seemed upbeat and exciting, but for number 18, it seems that the writing is on the wall for Canadian discount brokerages, and the message clear: innovate or become irrelevant.

Of course, as with any ranking or rating, it is important to contextualize the figures and commentary. The letter grades, while based on a system, still reflect a high degree of subjectivity and opinion of the author.

In the case of these online brokerage rankings, it is particularly interesting to note the lack of variance in the rankings over the years and also to compare the 40 attributes of a great online brokerage to the letter grades that were given.

While we will explore these in more depth in a subsequent article, it was noteworthy to observe that the more attributes of a great brokerage a provider has, it doesn’t necessarily translate into a better letter grade, and in fact, in some cases the differences between letter grade and number of features can be substantial. The following table shows, for example, that despite having more “great” features, RBC Direct Investing and Scotia iTRADE (each with 29 out of 40 attributes) received a grade of B while Questrade (with 22 out of 40) received a B+. 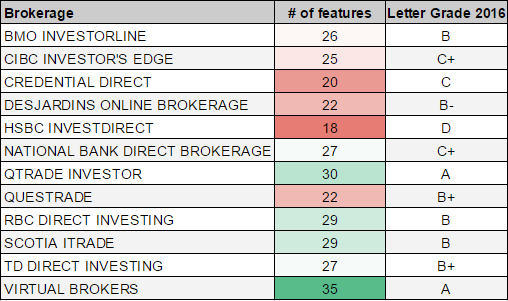 Change, and more importantly exciting change, as the tables above show, is hard to come by in this space. Over the past several ranking cycles, at least according to the categories measured by Rob Carrick’s analysis, most Canadian online brokerages are treading water.

The quarter was filled with excitement – a Canadian election, wildfires in Alberta and a Brexit all dominated the news cycle. On the discount brokerage front there were also some noteworthy developments heading out of the ‘busy season’.

The first important development noted was the pullback in deals from Questrade. As the dominant promotional offer provider, it was interesting to see them pump the brakes on offering new deals or promotions. This move would come to define the deals space for the remainder of 2016 and it opened up the field to other brokerages, such as Virtual Brokers, who were ramping up in providing incentives and promotions.

Another interesting development was the launch of the MoneySense brokerage rankings in April. These rankings, powered by Surviscor, crowned Qtrade Investor as the best Canadian discount brokerage overall, with numerous awards being the best at something being given out to many other brokerages too.  As we would come to learn later in the year, MoneySense magazine would abandon doing print versions of its magazine and instead publish exclusively online.

Social media starts to show signs of life in May with Scotia iTRADE launching another competition to drive traffic to its investor centre and National Bank Direct Brokerage making a play on LinkedIn to get a foothold there. Interestingly, late spring is when a number of issues and outages were noted with TD Direct Investing’s WebBroker – especially around the Brexit vote aftermath. These issues would continue to persist and irritate investors through the summer and fall.

Glitches and technical hiccups were the theme of many tweets this week. Mentioned this week were BMO InvestorLine, CIBC Investor’s Edge, Questrade, Scotia iTRADE, TD Direct Investing and Virtual Brokers.

In this post from reddit’s Personal Finance Canada section, one investor was considering the pros and cons of choosing betwen a TD e-series account or a DIY investor account at Questrade. Find out what users (and Questrade) had to say.

That’s a wrap on a cold and snowy week. Remember, if you can’t get out of it, you’ve got to learn to get into it. Stay safe and warm this weekend!