Well it has certainly been a week to remember. Not so much for what happened in the markets but rather for what happened around them and what this weeks events may do to markets everywhere. While the presidential debate or the loss of championship run were big news, perhaps the biggest news is the major outage of some of the world’s biggest websites because of exploits in technology. Heading into the weekend, it is a stark reminder that with more of the world moving to online, technology is not without its risks.

This past week, technology is the theme for the lead story at one Canadian bank-owned online brokerage. Specifically, how one online brokerage is using video technology to try and pull ahead of its competitors in the digital landscape. From there we’ll take a quick look at the latest figures from US-based online brokerages as many of them reported their earnings this past week and also provided a snapshot of what’s happening behind the scenes at some of the world’s biggest online brokerages. Finally, we’ll check out what DIY investors were talking about in the tweets of the week and in the investor forums.

While it’s been somewhat quiet at several of Canada’s biggest bank-owned brokerages, Scotia iTRADE has definitely been busy working to capture the attention of DIY investors online. Specifically, over the last few weeks, we’ve noted a definite uptick in the amount and diversity of video content coming out of iTRADE’s various social media channels. During this time, they’ve launched a video-based advertising campaign, several new ‘explainer’ videos on investing (in French) on YouTube and recently held a livestream “fireside chat” with personal finance expert Evelyn Jacks.

There’s definitely lots to unpack but let’s start with video advertising. For any regular consumer scrolling through content on just about any social media channel, videos are everywhere. Knowing that video posts are almost certainly going to be more engaging than regular ol’ images, Scotia iTRADE’s latest batch of video ads have started to show up in social media feeds, such as Twitter, and people are noticing. Interestingly, there aren’t that many bank-owned online brokerages with their own Twitter handle and with the exception of Questrade, the non-bank-owned brokerages aren’t nearly as active on social media feeds as they need to be to gain a significant presence. So, for Scotia iTRADE, the fact that they’ve doubled down on Twitter by not only having an account of their own but also buying ads means they’re getting an interesting share of the spotlight with millennial users.

Another place that Scotia iTRADE appears to be moving into is the French speaking market. Case in point is the recent publishing of their market education videos on YouTube en Français. For many of the big Canadian bank-owned brokerages, building an audience within the Quebec DIY investor marketplace has been a challenge. Data from our educational event tracking showed that TD Direct Investing, for example, had a difficult time pulling in people to their in-person seminar topics in Quebec much more so than in other parts of the country. Now it appears that Scotia iTRADE is widening its net to try and provide investor education oriented content to French speaking audience. Again, this is an area in which other brokerages big and small just simply aren’t doing enough of. Add to the fact that this is being done online, and other brokerages are going have their work cut out for them to produce and deploy that kind of information. Interestingly, it is difficult to imagine either Desjardins Online Brokerage or National Bank Direct Brokerage, both of whom are fiercely competitive brands within the Quebec market, making room for Scotia iTRADE to come in and capture mindshare.

Finally, this past week, Scotia iTRADE held a ‘fireside chat’ with personal finance expert Eveyln Jacks on the topic of risk management. This interactive webinar enabled Scotia iTRADE to gather information from attendees (i.e. gather marketing leads) but also demonstrate that they are taking their seminar/webinar formats to the next level. While there are still kinks to be ironed out with the format, unlike several of their peers, Scotia iTRADE is definitely pushing forward faster and more broadly online. And, in a world where DIY investors have so many choices to consider, Scotia iTRADE is making it much harder for them to be overlooked. 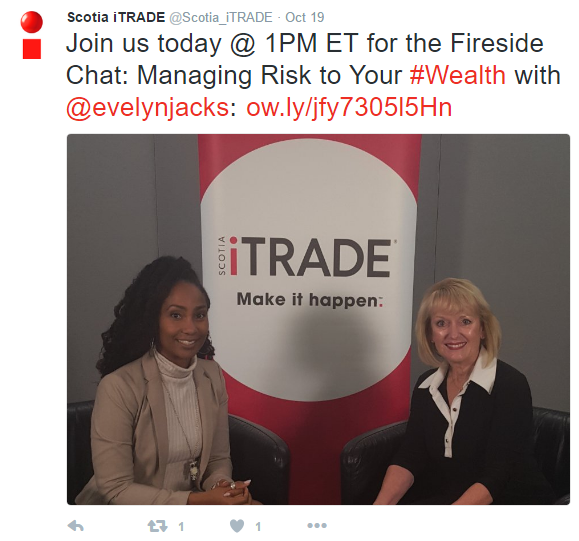 Is This Thing On?

A lot of traders know the saying: the trend is your friend (until it ends). For online brokerage Interactive Brokers, there are a couple of trends that are emerging surrounding their online brokerage business, some of which are more friendly than others.

On the positive side, the latest results from Interactive Brokers shows that they continue to crush it with regards to account growth, specifically with attracting more new customers to the platform than having customers leave. It’s actually rather uncanny how long their account growth streak has continued.

On the negative side, when the founder and CEO of the company wonders out loud if the platform is broken because there was no trading activity in the market, there’s definitely something strange in the trading neighbourhood. The impact of a lapse in volatility in the marketplace had a significant negative outcome for market makers (which again continued to lose money) which just goes to show that even the pros have had a tough time trying to time and trade the market when their strategy doesn’t line up with market conditions.

For many brokerages, it will be just a few more weeks until the election is finally over and markets can once again reprice assets without having to hedge against the possibility that Trump may actually win. Until then, however, brokerages and their clients are clearly watching and waiting (except for the brave/impatient few who are already betting into the election).

Late last week Qtrade Investor sent an announcement to clients stating that ECN charges, the annoying fees that chew into trading profits because of market orders, were being dropped…sort of.

Technically Qtrade Investor reserves the right to charge ECN fees however they have described the situation of when those fees would be incurred as when an individual’s trading pattern makes “repeated, high volume trades on the active side of the market.” In other words, for most low to moderately active investors, this is definitely welcomed news from Qtrade.

While the technical definitions/limits were not spelled out (e.g. how many trades within a specific time frame is too many), Qtrade Investor did go on to mention that in the event of “excessive” trading that generates ECN fees, a Qtrade client service representative will attempt to contact the client.

Undoubtedly, the recent introduction of youth-focused pricing, some commission-free ETF trading and now removal of ECN fees will bode well for Qtrade in Rob Carrick’s online brokerage rankings. With the landscape for DIY investing clients being so competitive, however, there’s a fairly decent chance this news gets broadcast much more loudly before and after those rankings.

It was a relatively tame week across Twitter for Canadian discount brokerages. Nonetheless there are some interesting client service moments that highlight why Twitter is a must-have for DIY investing clients looking to get traction on customer service issues with certain online brokerages. Mentioned this week were BMO InvestorLine, Questrade, Scotia iTrade & TD Direct Investing.

How Smart is Your Folio?

Seems like there aren’t many places investors can go online these days without bumping into a BMO Smartfolio advertisement.  In this post from RedFlagDeals.com’s investing thread, one curious investor took the marketing to the market to find out what others had to say about BMO’s robo-investor service.

Snug as a Bug

This was an interesting post from a Questrade user also posted on RedFlagDeals.com that highlights the importance of actually keeping tabs on a portfolio. Yes, even technology can fail, however as the author of the post suggests, staying on top of the details helped prevent a potentially bad trade.

TGIF. It’s been a bumpy ride to land the work week. If you still aren’t sick of the debate coverage yet and you want a great chuckle courtesy of the fine folks on Twitter, enjoy the hashtag #trumpbookreport.