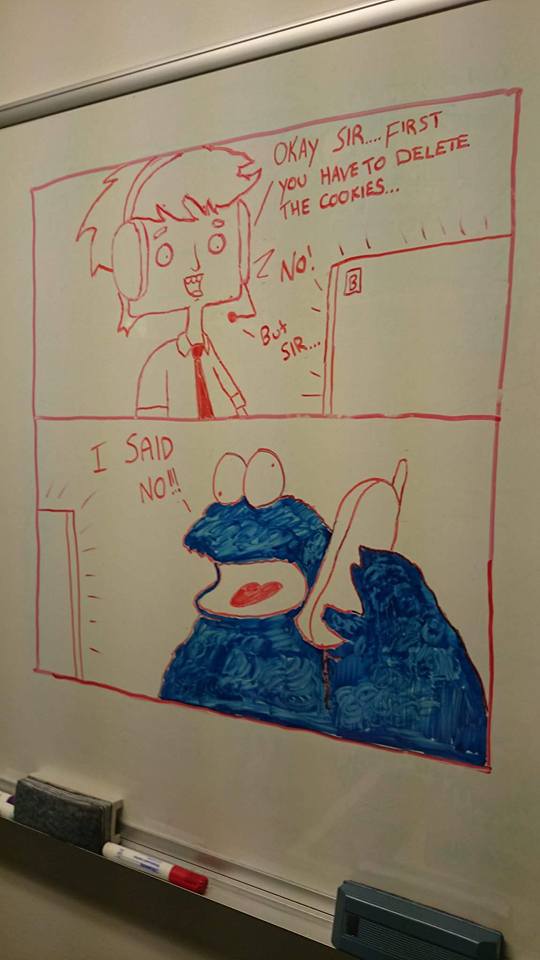 If there’s one thing markets are fueled by, it’s hype. Heading into this weekend, there’s plenty of hype to go around, from the upcoming Brexit vote, to the NBA finals game 7 or even the epic battle to be fought in game of thrones, all of these are building expectations and anticipation. For their part, some brokerages are astutely watching what DIY investors may be excited by and hoping, in some small way, to build excitement and shape expectations with some clever marketing.

In this week’s roundup we take a look at another promotion to surface from a Canadian discount brokerage – a sign that summer is not a period where brokerages are slowing down. Next we take a look at the latest online broker to embrace bringing a roboadvisor into their service offering. From there we look at interesting chatter we came across on various social media channels and close out with a few educational events upcoming and forum comments from the week.

Summer is almost officially here and although this would be a time when a lot of DIY investors might be stepping back, another discount broker deal has surfaced, this time from National Bank Direct Brokerage.

The latest offer from NBDB appears to be well timed for those interested in trading the incoming volatility of a Brexit vote, a US presidential election and possible interest rate hike by the US as it is an offer that combines discounted margin borrowing rates as well as a lowered commission fee – both for a limited time (of course).

Specifically, National Bank Direct Brokerage is offering new and existing clients a discount of 0.75% on their typical margin lending rates. For new margin account clients, they’re also fixing the commission rates at $6.95 – the commission rate normally available to active traders – for the duration of the promotion. The promo itself runs from the beginning of June until the end of August.

For those fortunate enough to time things just right, National Bank Direct Brokerage is also offering commission-free ETF trading on Canadian ETFs until June 30th so there is a window in which it could be possible to benefit from both promotions (although that is a very short window).

One thing to keep in mind, however, is that opening a new account will take some time and a printer and rely on Canada Post (who may or may not be going on strike July 2). According to the NBDB website the turnaround time for opening a new account with NBDB can take up to 72 business hours (which is 9 business days @ 8 hours/day) once documents are received (by mail).

With this latest offer from National Bank Direct Brokerage, it is encouraging to see the competitive element return to the deals/promotions section. The post RSP season appeared to gear down substantially however activity appears to have picked up again getting closer to the summer. In addition, it is also interesting to see that brokerages appear to be getting more creative with the kinds of offers they’re putting forward.

In the case of National Bank Direct Brokerage, it looks like the promotional offers are about lowering costs, even if it is for just a limited amount of time, rather than offering up commission-free trading or cash back.  It will be interesting to see if other bank-owned brokerages start to follow suit and also what the independent brokerages start to do in response. Either way, it’s a great start to the summer for DIY investors looking for a break on an online trading account.

Earlier this month, there was news that another US online brokerage is hopping on the robo-investor train. E*Trade Financial has followed Charles Schwab’s lead by rolling out their own robo-investor product.

While it is not a unique approach, E*Trade is branding their ‘adaptive’ offering as a robo-investor with a ‘human’ approach. What this means is that, in addition to the reliance on index ETFs, there will also be an option for a portfolio built to include actively managed (read pricier) mutual funds.

In Canada, robo-advisors such as BMO’s SmartFolio and Questrade’s Portfolio IQ have a “hybrid” approach that blends passive and active approaches to wealth management. It’s for that reason that even though there is the label of ‘robo’ attached to them, there is still a lot of ‘human’ influence to how and where investments are managed.

With the latest move by E*Trade, there is yet another signal confirming the trend in online brokerages hoping to capture and participate in the new ‘fintech’ era that is taking hold. It likely won’t be too long before we see the non-bank owned brokerages and bank-owned Canadian online brokerages alike start to offer these services (whether organically, in partnership with or by acquisition) in the not too distant future.

In our regular sweep of social media channels, there were a couple of interesting pieces of news that crossed our radar this week.

First, according to this tweet, it looks like BMO InvestorLine is getting a new national director – Rosemary Torelli. Interestingly, that wasn’t the only BMO InvestorLine senior executive appearing on social media, as President of BMO InvestorLine, Julie Baker-Merz appeared in this clip on innovation in financial technology. Timing wise, the appearance seems to line up with yet another BMO InvestorLine panel sent to gather feedback about the online discount brokerage’s services.

As a follow up to tweet from this past May, National Bank Direct Brokerage announced the winner of their ‘crack the vault’ contest. The lucky winner of $5,000, Semyon Levin, was announced on NBDB’s LinkedIn page. 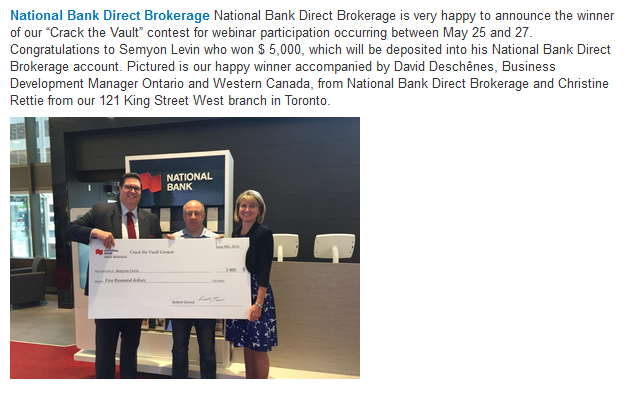 Maybe the nicer weather brought out the best in some as (most) tweets were a bit more congenial. Mentioned this week were CIBC Investor&apos;s Edge, Interactive Brokers, Questrade, Scotia iTRADE and TD Direct Investing.

Summer’s almost here, and it’s a glorious week ahead for discount brokerage-sponsored investor education events. Here are some upcoming sessions that may be of interest to both options, and technical analysis enthusiasts. Margin accounts and short selling round out this week’s selection.

Scotia iTRADE – Index Iron Condors: A Friend When There is No Trend with Pro Market Advisors

In this post from reddit’s Personal Finance Canada subreddit, one user feels the sting of fees from investing through their bank. Find out what the reddit community had to say about ways in which to lower investing related costs.

Rewards points are a great little perk for buying everyday items. What those points are worth, however, is always a bit of a guessing game. In this post from RedFlagDeals.com’s investing thread, one user kindly shares something of interest to RBC Direct Investing users about the value of points to pay for a trade commission.

That’s a wrap for another week. Hope everyone has a great Father’s Day filled with many corny dad jokes. Of course there’s also lots of excitement for basketball fans and an epic battle on Game of Thrones between two guys who would probably not have a great Father’s Day (if they do that kind of thing in the seven kingdoms). In the meantime, here’s a great dunk to kick off the weekend.