Even the best investors can be caught off guard by sudden moves in the market. It’s a humbling lesson and usually the tuition for poor risk management isn’t cheap. For Canadian discount brokerages, there are definitely signs in the US brokerage market that the risks for certain brokerages are rising.

In this week’s roundup, we take a deeper look into some interesting moves that took place in the US online brokerage market and what that might mean for Canadian online brokerages as the competition and race for technological supremacy heats up. Next, we take a look at standard online brokerage commission pricing, to see why it’s not exactly an apples-to-apples comparison across the board. From there we’ll take a look at the reactions from DIY investors on Twitter and close out with comments from the online investor forums.

Why is a market so exciting? It settles debates from opposing sides using dollars and cents. The business of being a brokerage is something that we cover regularly in the weekly roundup and this past week there were some interesting developments that are shaping up to make the ‘online brokerage’ marketplace even more exciting.

On the one hand there’s a bullish case to be made with interest rates being telegraphed to rise. For borrowers this isn’t great news but online brokerages are also lenders and as we reported several weeks ago, significant portions of online brokerage revenues come from their margin lending. One of the long time messages Schwab has been trying to communicate to its shareholder base is just how material even small increases in interest rates will be for their financial performance.

On the other hand, there are the bears. Interestingly, the case is not entirely a bearish one considering the source, Thomas Peterffy, CEO of Interactive Brokers. According to a recent interview in the Financial Times, he is forecasting that 80% of brokerages in the US will disappear because of constrained revenues, changing investor habits, compliance costs and advances in technology. So, while this is clearly a bearish call for most of the players on the field, for some, including Interactive Brokers, it may be a self-fulfilling prophecy that they’re left standing after this massive cull.

This is not the first time he has pointed to this data this year either. Peterffy alluded to this point in a recent earnings conference call with an analyst which suggests that this forecast is both a clever marketing pitch to professional brokers that want to lower their cost and a way to showcase the merits of Interactive Brokers’ model of heavy automation. In either case, Interactive Brokerages certainly stands to benefit from brokerages either folding, being gobbled up or deciding to use Interactive Brokers for their platform of choice. Well played IB.

There is, however, one potential ‘canary’ in the Canadian online brokerage coal mine.

Now that Virtual Brokers has changed (i.e. raised) their commission structure and is starting to shift their focus towards ‘value’ rather than price, it may signal that they too are feeling the pinch of the low cost game. Unfortunately for small brokerages like VB, value is a game that the bigger financial brands in Canada have a clear edge over (think bundling of services and convenience).

To compound the challenges facing the independent brokerages they need the scale of client accounts (or trading activity per client) to be large otherwise commission prices need to be lower in order to offset the greater convenience offered by the bank-owned brokerages. The only other viable alternative for non-bank-owned brokerages is to invest in making their product experience exceptional – which is not a small investment in either the people running the brokerage or the technology needed to pull it off.

For Canadian DIY investors, ultimately, the scenario where costs/fees decrease is a good one.

Unfortunately for the non-bank-owned brokerages are now quite vulnerable to being priced out. There’s already proprietary data we’re seeing that shows they’re losing their edge against the banks, and the introduction of robo-advisors certainly doesn’t help matters either.

If the bank-owned brokerages were to drop their standard commission fees down even further, the traditional “low cost” or non-bank owned online brokerages would have a difficult time competing demonstrating yet again that the debate over the best online brokerage may just come down to who’s left standing.

Nobody likes discovering what’s in the fine print, especially after receiving a charge from their brokerage. Yet, despite all of the forms and acceptance of terms and conditions, so many DIY investors get tripped up by the fine print put forward by online brokerages.

Interestingly, this past week there were two examples of two different investors who unfortunately appeared to get dinged for fees they didn’t see coming.

The first was in a post in the Canadian Money Forum in which a Qtrade Investor client was charged $22 commission for a trade they thought should only cost $8.75.  In the second case posted on Twitter, a user was clearly caught off guard by the commission rates. 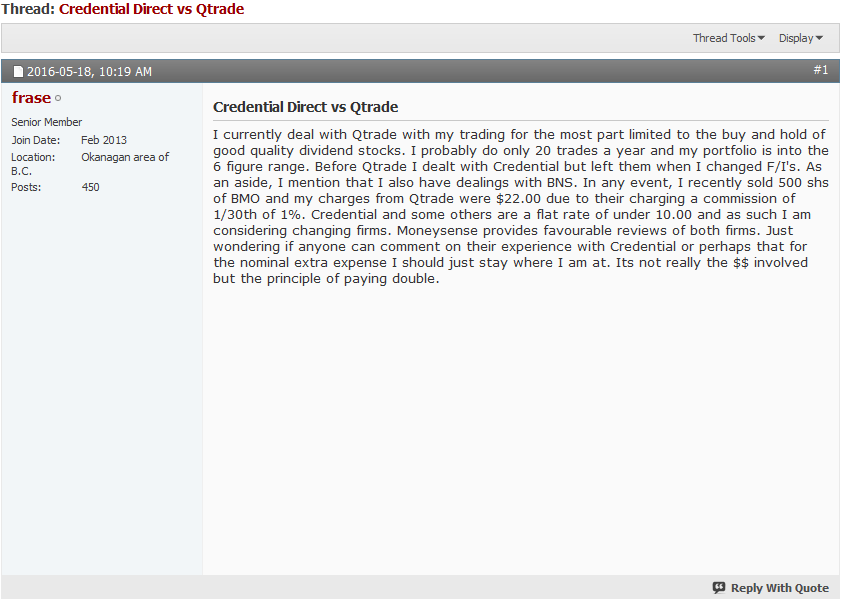 Of specific interest is the situation of the trade at Qtrade Investor. In this particular instance the individual in question stated they were charged a fee that was generated on top of their ‘commission fee’. As it happens, this fee appears in the “other fees” section of the Qtrade website pricing page where it states that a charge of 1/30th of 1% or (0.00033) of the value of the trade. 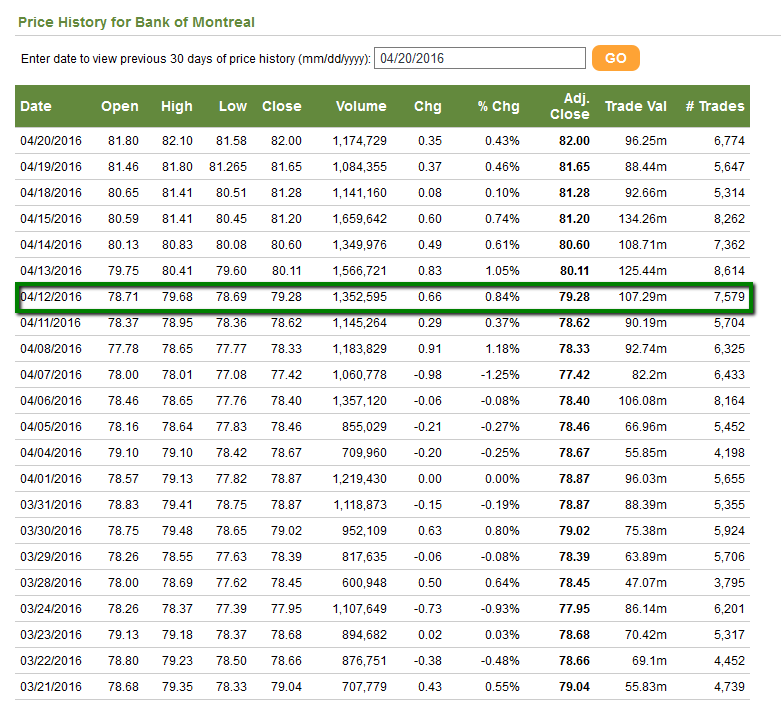 There are a number of interesting things about this scenario.

Perhaps the most fascinating is that this person described themselves as a relatively infrequent trader (<20 trades per year) with a six-figure portfolio. Yet for the surcharge of an extra $13.25 of a $39,750 order, the individual went through the motions of reconsidering their relationship with Qtrade Investor to consider moving their crosstown rival Credential Direct (or others who may offer truly flat pricing). And, not so much because of the $13.25 but as noted by the individual it was “the principle of paying double”.

It is important to mention that, while Qtrade Investor does offer to waive this fee for clients who make over 150 trades/quarter or who have at least $500,000 in assets across all Qtrade accounts, for this investor, the standard pricing rules applied.

From a business perspective, the bigger question is what is it worth to an online brokerage have that client or to try to win them back? The answer to this question is probably why, in some part, many bank-owned brokerages have decided to offer flat commission pricing rather than pass through the ECN charge.

For DIY investors, flat pricing is usually a more favourable option to have than variable pricing and the difference can certainly add up depending on the manner or volume of trade being executed. Flat pricing also simpler and more predictable.

Interestingly, Virtual Brokers is the only non-bank-owned brokerage to offer the flat commission pricing as a standard option. It should be noted that Virtual Brokers does pass through the SEC fee for US securities trades at the rate of $0.0002/share.

With flat commission pricing the independent or “low cost” discount brokerages in the Canadian market are now not necessarily less expensive than the bank owned discount brokers. Other fees, such as account administration fees or inactivity fees certainly bear consideration but when looking at flat vs variable cost on a per trade basis – flat makes a compelling case.

Coming back to the bigger issue of changing a brokerage on principle, this example offers an important insight into the value that DIY investors place not only on transparency of fees, but also on clarity and customer choice.

DIY investing does mean that there will be fine print and unfortunately as individual investors, everyone who signs up for an online trading account is responsible to know some of the “quirks” and important conditions for trading through a particular online brokerage.

1/30th of 1% may not seem like much but it was enough to cause one client to take to the internet to voice their displeasure.

The lesson to brokerages seems clear: leave the surprises in price to the stock market and not in the commission structure of those doing the trading.

We had a few technical difficulties with the tweets of the week, so only a selection of tweets are shown here. We will update this when we’re able to access the other tweets. In the meantime, there appears to be no shortage of reasons that caused investors to reach out – most notably an outage from TD Direct Investing’s web broker.

The Price of Advice

In this post from Canadian Money Forum, a product that we don’t often hear much about – BMO InvestorLine’s Advice Direct, was mentioned by someone considering the service. Interestingly there was also the mention of bonus trades for InvestorLine to sweeten the deal to the tune of 160 free trades per year. There’s an interesting debate about robo-advisors in there as well. Worth a read.

The Cost of Advice

In this post from reddit, an alleged interaction with a Questrade representative stating that someone should over contribute on their TFSA sounded alarms with other readers and also with Questrade community reps who replied. An interesting example of why it’s always good to trust but verify.

That’s a wrap on another week. Heading into the May long weekend remember that Canadian markets will be closed on Monday. Have a safe and fantastic weekend and for all the Raptors fans, hang in there!