For those who can’t wait to see Old Man Winter actually leave, this weekend couldn’t come fast enough. But, rest assured, signs of spring abound and as #BirdieSanders showed, that offers something to smile about. Canadian discount brokerages also seem to be taking their cues from Mother Nature by doing a little spring cleaning of their own.

In this shortened week’s roundup, we take a look at the latest online brokerage to roll out a brand new website for DIY investors. Next we report on signs of life at one independent online brokerage that suggests they’re looking to be a more active presence in the brokerage space. As usual, we take a look at the latest chatter on Twitter and across the financial forums and highlight the upcoming investor education events for next week.

Spring is a great time to say goodbye to old and welcome in the new. For RBC Direct Investing, it looks like this spring will bring with it a dramatic update to their website.

The timing of RBC Direct Investing’s website roll out comes well after the big wave of updates that took place across 2014/2015 for many Canadian online brokerages. While going first means having to take a leap of faith in terms of design and whether or not users will respond (or cry foul) about certain choices, rolling out a ‘new’ website at this point RBC Direct Investing means that expectations for getting it right are likely to also be higher.

One of the biggest challenges for financial service providers, especially online brokerages and those closely linked to technology, is striking a balance between being innovative and being familiar. By having to also coordinate with their parent brand’s look and feel as well as with expectations from other service lines (like banking), there’s little wonder why redoing a website for a firm such as RBC Direct Investing would take considerable time and effort.

Of course, the time that it has taken to get their online presence to “appear” modern has not gone unnoticed.  In this past year’s Globe and Mail online brokerage rankings, for example, Rob Carrick commented that “Canada’s biggest bank should have a sharper product.” And, while that comment likely reflects the expectations of a firm (technically the parent of RBC Direct Investing) that netted a quarterly income of $2.4B, Carrick’s remark that “The homepage for RBC Direct Investing’s public website is old school. O-L-D school” is particularly stinging.

Like many things in the online world, change is inevitable. Let’s take a look at some of the features RBC Direct Investing’s new website includes (for more info, check out the video below).

The new RBC Direct Investing website appears to be designed to more than accommodate both desktop and tablet users. Like their parent banking website, there is a greater emphasis on panels/boxes so that tablet users can scroll and tap their way through sections of the new site. The switch in navigating styles will undoubtedly appeal to some more than others, however the use of boxes is a common trend among many more ‘tablet friendly’ responsive websites. That said, there as with the release of their banking site interface in January, there is bound to no shortage of strong opinions as people react to the new layout.

Another significant change is the use of “Place an Order” instead of “Trade”. While it may take some getting used when existing users want to execute a trade, the new label is more meaningful and intuitive to new users.

While there’s lots to say from a design and user experience perspective, what ultimately stands out about the design is the way in which the new tiled layout hopes to strategically meet user needs but also direct user engagement.

Areas like their “My Portfolio” section, for example, have much more visually noticeable and attractive elements (like pictures and illustrations) that naturally stand out against the very plain blue boxes. Those more noticeable elements, shown in the following screenshot, highlight where RBC Direct Investing would like to attract more deposits or engage more deeply in an article that undoubtedly positions RBC as a solution to a financial services need. 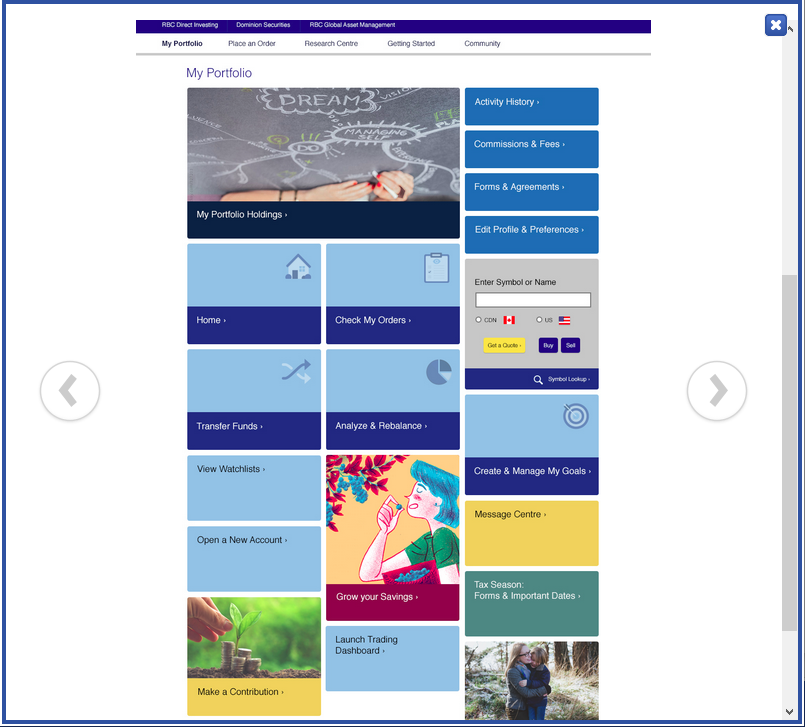 At first blush, the latest update to the website looks to make information easier and more intuitive to find. It is also readily apparent that they are turning a tiled design to optimize the user experience on tablets and mobile devices, however this may or may not go over well as it requires users to adapt their navigation style to include clicking on tiles.

Overall, like the roll out of any new product, it will ultimately have to face the test of time and users to see whether or not it hits the right mark with critics.  That said, with the pace of technology and the entrance of new, more agile and web-savvy competitors, it is likely the website refresh will (have to) happen a lot sooner.

Some other notable developments this week included Credential Direct posting yet another webinar geared towards personal finance/investing. While they generally have flown under the radar in the news cycle, Credential Direct has nonetheless been quietly building up their activity level on both social media  (via their Twitter handle) and holding more interesting webinars/seminars. It shows they are not standing still despite having quite the uphill battle to fight in terms of pricing and user experience, neither of which will be cheap.

Tweets of the Week

As March heads out like a lamb, it’s a wild and wooly week ahead for discount brokerage-sponsored investor education events. Here are some upcoming sessions that may be of interest to options enthusiasts and those interested in short selling. Margin accounts, and tax-efficient investing round out this week’s selection.

A Series of Questions

For many passive DIY investors, the TD e-series funds are a popular choice. In this post from RedFlagDeals’ investing forum, users weigh in on one user’s question about the merits of going all in on the e-series.

Whether or not to borrow to invest is something that is often debated by investors in the DIY forums. In this post, an individual asks for help weighing the pros and cons of borrowing to invest in an RRSP with Questrade. It’s an interesting read for those contemplating the ‘borrow to invest’ approach.

That’s it for this shortened trading week. Next week DIY investors can begin hunting for more deals and promotions as the deals area is about to get a major reset. Until then, however, Easter treats will have to suffice. Have an egg-stra special long weekend!