Like it or not, the one great lesson that markets continuously teaches its students is that prices reflect some vision of the future and not the present. Of course what makes markets so exciting is the fact that there are so many companies thinking up new ideas and products to bring that future into reality.

For the heads of Canadian discount brokerages, the future of DIY investing is always on their minds. The speed at which they’re able to respond to it or even shape it, however, is what has started to separate those who are known as ‘innovative’ from those deemed to be stagnant.

In this week’s edition of the roundup, we take an in-depth look at one brokerage who has figured out that it will take more than just technology to be able to be a leader in the DIY investor world of tomorrow. Next, we’ll look at the reaction to last week’s Globe and Mail online brokerage rankings from across social media and also take a look at what investors were reacting to this past week on Twitter. Finally, we’ll preview the upcoming investor education events for the week ahead and round out with chatter from the investor forums.

While it may not be quite as big as the release of the new Star Wars movie, the battle for intergalactic supremacy in the discount brokerage world is poised to heat up yet again this weekend. Rolling out this weekend are two major platform updates from Questrade that are sure to bring cheer from DIY investors and rattle the nerves of bank-owned and independent brokerages alike.

Rolling out this weekend will be a highly anticipated set of upgrade to the suite of Questrade trading platforms. Their active trader platform, IQ Edge will see some long sought-after features finally go live and a new web-based trading platform join their bench.

Starting first with the update to IQ Edge, the upcoming refresh will be the third major upgrade to the platform this year taking the release number to 4.2. The major feature to be added is the ability to use conditional orders when placing trades – a feature that many active traders rely on to plan their entry and/or exit points. In fact, Questrade is not the first brokerage in 2015 to roll this feature out nor are they alone in being able to offer this as part of a trading platform. Recall that earlier this year Desjardins Online Brokerage also launched conditional trading into their trading platforms and brokerage platforms, such as the Active Trader and US trading (aka ThinkOrSwim) platforms at TD Direct Investing and Interactive Brokers’ Trader WorkStation have had conditional orders for quite some time.

With each release of Questrade’s IQ Edge, it is clear that they are moving closer to having a trading platform that is as good as if not better than many of the third party platforms currently being offered by other brokerages. And, while there appears to still be features and functionality that users are looking to have built in, Questrade is clearly listening and executing on getting trader-friendly features integrated on a regular basis. This is certainly one area in which they have outshone their larger bank-owned brokerage competitors who seem to be much slower at releasing upgrades to trading platforms.

For less active traders, Questrade is also releasing a browser based platform that is slated to replace (eventually) IQ Essential.

One of the key features being trumpeted for the new online platform is the watchlist. While a watchlist is not a technological marvel, the small changes, such as adding sparklines for a visualization of price trending, is a nice and modern touch. Enabling snap quote refresh of the watchlist is also a much more convenient way to source quotes from the watchlist that aren’t part of a real-time update feed. 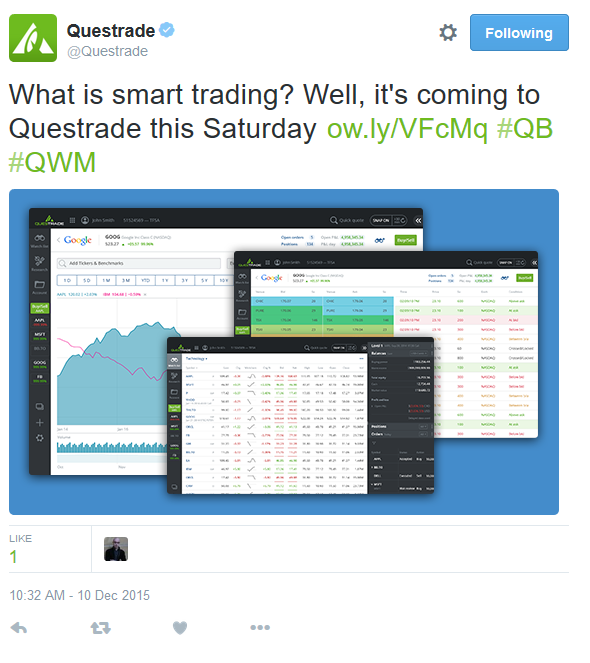 Another feature being highlighted is the ability to trade seamlessly across devices. The reality of 2015 and now 2016 is that individual investors would like access to information about their investments as well as the ability to buy or sell them, across any device.

Of course, while all this innovation is exciting, it also creates a challenge for DIY investors and clients. Questrade now has more platforms, they offer more services, and a wider variety of packages than they ever have before. And, while more is usually better, for most consumers, it’s also a challenge to understand exactly what Questrade has to offer.

With all of these choices and changes, as well as the many areas of investing and wealth management that Questrade is now in, their product offering is no longer so simple to understand. Even though Questrade has maintained a very human voice, and has anchored its presence on social media, the reality is that Questrade is now doing more things than it ever has done before.

This tweet, taken from this week for example, shows that there are still folks out there who remember (and think) that Questrade is the no-fee broker when they shed this status several years ago.

For DIY investors, the lesson is that they can expect Canadian brokerages to have to innovate much more quickly in order to compete effectively with one another. While in theory this competition will drive better pricing and products, it will also create a whole new learning curve to stay on top of the changes within their own brokerages.

Without great support and communication to accompany these changes, the intended ‘improvements’ may backfire into user frustration. Fortunately for brokerages such as Questrade and Desjardins Online Brokerage, their individual releases of new features (such as the conditional orders) have been well supported with videos and content describing how these work.

Ironically, it seems that in order to truly succeed at innovation going forward, tech savvy won’t be the magic ingredient. Rather, a very human quality, emotional intelligence, will be needed to help customers navigate the brave new world of online investing.

Tweets of the Week

In addition to the regular overview of the Canadian discount brokerage voices on Twitter, we’ve also collected the reactions to the most recent discount brokerage rankings from the Globe and Mail’s Rob Carrick from Twitter and Facebook.

Here are some of the reactions to the 2015 Globe and Mail online brokerage rankings from across social media:

Counting down to the holidays, it’s a festive week ahead for discount brokerage-sponsored investor education events. Here are some upcoming sessions that may be of interest to those who are new to investing, curious about trading strategies, and options enthusiasts. ETFs, technical analysis, and registered accounts round out this week’s selection.

Scotia iTRADE – Active, Passive or Both Strategies with Purpose Investments

This past week, the Liberals made good on the pledge to lower the TFSA contribution amounts from $10,000 back down to $5,500. In this post from the RedFlagDeals.com investing forum, the discussion from DIY investors highlights some of the initial reactions and perspectives from the price-savvy crowd.

In this post from Reddit’s Personal Finance Canada section, a user is looking for a few answers related to moving funds from Sunlife to Questrade as well as other financial planning questions for a newly started position. Worth a read for those curious about employer contributions.

This week has seen so many different versions of the future, from dystopian to fantastic. Heading into the weekend, here’s a glimpse into the distant future as well as a post that signals a chance to finally dream about a better future.