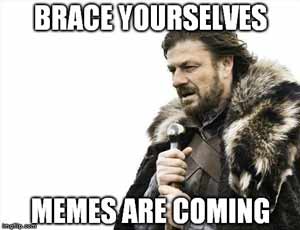 As it turns out, the launch of Game of Thrones season 5 isn’t the only epic battle around this April. While there won’t be the same kind of over-the-top fight scenes, gore or unending-memes, Canadian discount brokerages appear to be gearing up for their own fight for supremacy.

In this week’s roundup, we take a flying dragon’s eye view at the lay of the online brokerage landscape starting first with some big news about TFSAs followed by the growing movement to have better trading platforms. Following that, we take a look at which brokerage decided to hike inactivity fees, a brokerage that kicked off a competition to find the best investor in the land, as well as dark-horse entering into the investor education event space. Finally, we go to the voice of the people to find out the latest investor chatter in the land.  Brace yourselves.

One of the big news stories for DIY investors this past week was the hint that the Federal Government may be doubling TFSA contribution limits from $5,500 to $11,000 in the upcoming Federal Budget. While the TFSA vs RRSP debate still rages on, there are many Canadians who have fully embraced this vehicle for growing their wealth.  There are even those, to the chagrin of the CRA, who have embraced it a little too enthusiastically.  Of course the move to widen out the contribution limits of the TFSA is likely to touch off another huge wave of promotional activity from Canadian discount brokerages for whom the announcement is like an early Christmas.

Online brokerages are eagerly waiting for the confirmation before making any official announcements of their own, but it’s a likely bet that there were lots of analysts tasked with figuring out exactly what this opportunity could mean to their brokerage firm. The widened contribution limits mean additional assets through the door and perhaps a greater inclination of those with the wealth to trade it.

For DIY investors there is almost certainly something else they can expect with this new announcement: a flood of marketing and advertising about TFSAs.  One of the themes we see emerging from activity around the brokerage industry this week is definitely a ratcheting up of marketing activity and the announcement of the TFSA limits being raised is like tossing gasoline onto this already growing fire.

In the online brokerage industry, active traders are by far the most prized. Last November, we reported on the quiet roll-out of the Market Pro platform.  Earlier today, BMO InvestorLine announced some key feature upgrades to their Market Pro platform that look like they’ve got the functionality closer to what active traders would actually demand of a performance platform.  Included in the latest updates are point and click trading of equities and options as well as real-time position and balance updates.

The platform itself is powered by Interactive Data, the same firm behind ‘eSignal’ which has variants known as Market Q (used by National Bank Direct Brokerage) and Desktop Pro (used by Jitneytrade).  From a trading perspective, users can expect to get a significant boost in functionality compared to the BMO InvestorLine web interface.  While one user’s experience doesn’t define the experience for everyone, the following user on Twitter summarizes the hazard of trying to quickly execute trades using web browser-based trading platforms. 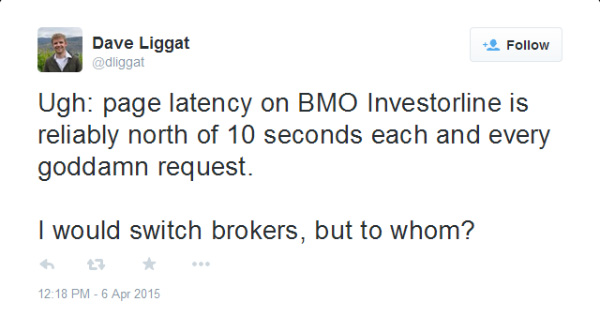 Not only are there lots of fields to complete when executing the trade, but also other factors, such as latency make the web-based solution less than appealing. Currently, the Market Pro platform is being packaged in BMO InvestorLine’s “5 star program” which has replaced their “Active Trader” program.  Specifically, access to Market Pro is available on the Gold and Platinum star packages which require minimum trading levels of 30+ or 150+ trades per quarter respectively to qualify. In addition to this roll out, it looks like BMO InvestorLine is also going to be placing additional focus on improving their platform experience as they also have posted for a user experience (UX) designer to assist them with enhancing the experience on InvestorLine across multiple devices (desktop, tablet and smartphone).

BMO InvestorLine isn’t the only bank-owned online brokerage looking to enhance user experience with a new platform. RBC Direct Investing is also testing out the beta version of a new web-based platform (and has been since late 2014). Unlike the BMO InvestorLine Market Pro, the new RBC Direct Investing platform appears to be geared towards the ‘standard’ trader/investor and is a significant departure from their existing trading interface. In either case, however, it is clear that DIY investors are starting to see bank-owned online brokerages start to create better user experiences and interfaces.

Ever hungry for growth in revenues and shareholder value, several of Canada’s large banks have recently undertaken a wave of fee hikes for many of their banking services. Responses from frugal Canadians have been decidedly negative (see here for TD, here for BMO and here for RBC). However unpleasant, though, having banks raise fees doesn’t seem too unexpected. Not so for independent online brokerages though. 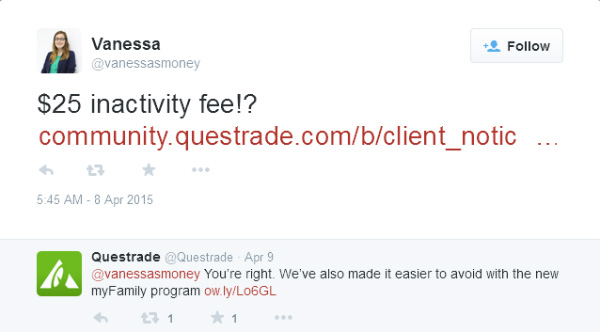 In an interesting move, Questrade has also decided to join in the fee-raising in an announcement listed in their community section. Specifically Questrade announced that they are raising their inactivity fee from $19.95 to $24.95. This announcement comes on the heels of their new myFamily plan launch, presumably to help soften the blow of the once no-fee brokerage starting to ratchet up their fees alongside the big banks.

Looking for a Big Winner

National Bank Direct Brokerage and Horizons ETFs are back at it again with the return of the ‘Biggest Winner’ online investing competition. The contest kicks off April 13th and features a top prize of $7500, a second place prize of $2500 and 6 weekly prizes of $500. The top prize will be awarded to the contestant with the highest portfolio value at the conclusion of the contest. Check out the full contest details and rules here.

The investor education section looks like it might start to get just a bit more crowded with the entrance of a newer player to the field. RBC Direct Investing, which has held orientation seminars at its investor centres in Toronto, Calgary and Vancouver, is now starting to offer sessions on ETF investing with educational partner iShares. Sessions will be featured on the investor education calendar and the event horizon later on this month. Also on the horizon this week is a webinar from TD Direct Investing and the Montreal Exchange on Options Trading Mistakes to Avoid (April 15).

TFSAs are set to boldly go where they have never gone before.  In this post from the Canadian Money Forum, the rumoured raising of the TFSA contribution limit has also raised the spirits of many DIY investors.  Check out what they had to say here.

Once Upon an RRSP

There are often times folks find themselves not exactly clear on how it is an RRSP actually works.  In the following thread from the reddit Personal Finance Canada thread, there are a number of interesting analogies and explanations of how these plans save investors money and what happens at retirement. That’s a wrap for this week’s roundup.  Don’t forget to get out from behind the screen to enjoy the spring weather or at the very least start using those new emojis to describe what you see!  Have an ☀️✌