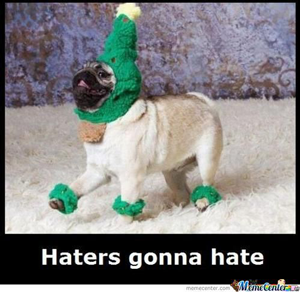 It’s hard to believe that December is already here. People tend to get a bit happier, office work tends to become a little bit more lax, fantasy football more competitive and holiday movies a little more epic.  For many of Canada’s discount brokerages, however, before the December slowdown hits, there’s lots of planning and positioning for the year ahead.

In this week’s roundup we take a look at the deals that kicked off the launch into December, review some interesting brokerage trading stats (for the numbers fans), highlight an online bump in the road for one brokerage and finally,we end with a special treat of an announcement for readers of the roundup.

With the start of a new month comes the chance to revisit the activity in the deals and promotions being offered by Canadian online brokerages.

In terms of deals and offers the month started against the backdrop of Black Friday and Cyber Monday. We were curious to see if any brokerage would pitch an offer given the tidal wave of excitement these shopping days generate for bargain hunters. And, in fact, one discount brokerage did step forward into the mix.

Questrade, which ventured into the deals day territory on Boxing Day of last year jumped into Black Friday and Cyber Monday with their discount on trading fees for silver and gold (and what a week to time that around given the volatility in those to precious metals). That promotion runs until the end of December.

The deals and promotions that are currently running for December are largely carried forward from November.  Questrade did launch a promotion at the outset of the month which is running for the duration of December. New offerings aside, this month has a number of deals set to expire by the end of the month. It should be interesting to see which offers get extended or replaced as brokerages move into their busiest season after the holidays.

A quick highlight of the current month’s deals shows 16 offers from 7 different brokerages.  As with previous periods, Questrade, BMO InvestorLine and Scotia iTrade have several offers in play and this month these three brokerages account for 75% of the deals currently on the table.

Interestingly, an offer from RBC Direct Investing which crossed our radar late last month is positioned to compete with many other offers on the market but specifically weighs in close to the BMO InvestorLine Youth Promotion. Both of these offers require no minimum deposit and the length of time to use the commission-free trades is 90 days.

In particular, Interactive Brokers (which also operates a subsidiary in Canada) tends to do a great job of laying out its customer trading activity metrics (in aggregate).  For those that are interested in tracking IB’s progress, this link summarizes their latest performance metrics.  There’s some pretty detailed data in there, especially on the number of buys and sells of equities by month as well as the average commission paid by clients for trades.

On their business end of things, while they seem to be growing their account base at a steady clip, the number of trades dipped month over month.  With the recent string of market volatility however, what was interesting to note about their latest earnings figures was the fact that their market making business segment didn’t do as well as many had hoped (yet again), demonstrating even pros can have a rough go at beating the market they’re helping to make.

For anyone who’s spent a significant time behind a trading window or terminal, there are few things more unnerving than market connection problems.  With so many technology touch points between buyer and seller, it’s remarkable that more doesn’t go wrong than already does.

Unfortunately for Questrade and their clients, this past week saw their online trading platforms go offline just as the markets were whipsawing into an open on Monday. Some months back we reported on TD Direct Investing’s network outage which took down WebBroker for a while.

While Jimmy Kimmel could probably have Questrade on his show to read some of the ‘mean tweets’ that came their way as a result of the outage, the reality for anyone trading online is to be prepared for if/when it happens.

The predictable jammed phone lines, boiling tempers and (at times) helpless feelings of watching the market turn against a position you just can’t get out of (and yes, those that you could have gotten into) characterize these scenarios. 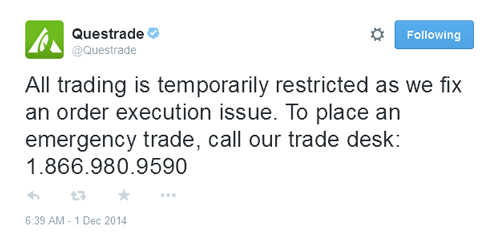 For their part, Questrade handled the crush of Twitter, forum and other online traffic fairly responsively.  They tried, it appears, to keep people updated on Twitter as to the status of the outage.  That said, it leaves a bitter taste to have to be stuck in or locked out of trading but big firms or small are susceptible.

Ultimately, the lesson that many learn is that it’s up to individual investors to identify and control position risks and, have a plan to be ready for when things go haywire, especially when actively trading.  It doesn’t make for a great sales pitch but probably does help account for the fact that disclaimer text on all of the brokerage platforms, data feeds and account opening documentation being as long as it is.

December is shaping up to be a really exciting month here at SparxTrading.com.  Throughout this month (starting next week) we have some amazing content presents lined up for release.  Stay tuned next week and through December as we share some really interesting pieces on 2014 from some special guests.

Do you have that in stock?

It’s not typically a question you would think to ask your online brokerage, however this post from RedFlagDeals.com’s investing forum does raise an interesting point.  While typically not an issue on the long side, those thinking of picking a brokerage because they like to short should consider asking it.

That does it for this week’s roundup.  With holiday music and general Christmas merriment (and mall traffic) in full swing here’s a little intergalactic cheer.  Good luck on your adventures this weekend wherever they may boldly take you!