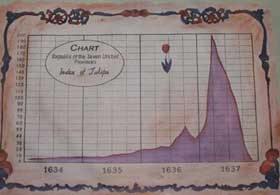 With the shortened trading week this week, it looks like markets got a chance to end the week on a high note. Now that spring is in full bloom (sorry Albertans) there will most certainly be tulips – which serve as an appropriate reminder about how crazy bubbles can form and burst.

As much as price is driven by supply and demand, the forces of competition are interesting to watch unfold in the discount brokerage market where, yet again, a commission drop was announced by a major bank-owned brokerage except this time with a twist. In addition to competition in price, there also appears to be movement in the investor education space – something that may be the next battleground amongst Canadian discount brokerages. Of course, with the competition comes complexity. Thankfully, an exciting announcement from here at SparxTrading will hopefully make things easier for DIY investors to do their research as the competition amongst brokerages continues to heat up.

This past week Scotia iTrade jumped into the price drop ring but with a twist. Instead of keeping pace with the other bank-owned brokerages at the standard commission pricing level, Scotia iTrade announced that they’re going to go after the highly active (and highly valuable) trader segment and lower their best commission level from $6.99 down to $4.99 flat for clients that make 150 or more trades per quarter.

While in dollar terms, the offer may not seem like a lot, for highly active traders, the savings are substantial enough to probably get their attention. The savings for traders that make 150 or more trades per quarter translate into at least $1200 per year.

One of the reasons why this deal ups the ante with both bank-owned brokerages and independent brokerages is because traders at that level of activity also qualify for free access to premium level of Scotia iTrade’s FlightDesk platform. This platform is a fairly robust trading tool so other brokerages that cater to the highly active segment will have their work cut out for them to match the total value of the offering.

The ‘cherry-on-the-sundae’ however is that Scotia iTrade is also pairing the new pricing drop with a deal. They’re offering up either cash back or free trades for new and existing clients that range from $50 to $500 or 100 free trades to 500 free trades depending on the deposit size. To learn more about the deal, check out our discount brokerage deals section.

Be on the look-out for an in-depth look a couple of follow up pieces we’re putting together on the commission price drop and the active trader segment.

We All Need Some Education

In a regular scan of the Canadian discount brokerage landscape, we picked up something interesting on a pair of different webpages.

On Credential Direct’s home page we spotted a large banner pointing to educational resources being offered to clients. While it just speculative at this point, it appears that after the session with Dan Bortolotti, Credential Direct may be moving to offer more education as part of its service offering.

CIBC Investor’s Edge has also picked up in activity by offering a couple of webinars this year, with the most recent one being a webinar on using some of Morningstar’s research features.

Although these moves are modest by comparison, investor education is definitely on the minds on several brokerages and even recent articles seem to suggest that self-directed investors can expect more of it to come.

For many self-directed investors, choosing or comparing online brokerages is no easy feat. In fact, this past week there two articles (this one on Morningstar by Gail Bebe, and this one on Globe Investor (paid) by Rob Carrick) that were published to try and add some clarity to the process. Thankfully, however, the process of researching and choosing an online trading account is about to get a little easier.

As announced in our post earlier this week, we’re getting set to roll out our new, redesigned brokerage profiles. The new profiles will make the research process much more efficient by including information that may self-directed investors are interested in learning about. We’re rolling out a beta version to a small group of industry participants before rolling it out in beta format at the end of this month. Check out the following post for more details.

Biting the Hand that (Data) Feeds You

The conversation on HFTs is still alive and well. In the following post on Canadian Money Forum, there was an interesting question posted on whether community members tended towards market orders or limit orders.

When the Dust Settles

Getting an order filled in stages can be stressful (and sometimes expensive) scenario that traders find themselves in. In the following post from the RedFlagDeals forum, there was an interesting thread that highlights the importance of understanding how particular brokerages treat partial fills for orders and why knowing your order types matters.

That does it for this week’s roundup. Hopefully everyone will have a chance to stop and smell the flowers this weekend – which is a great reminder going into Earth Day next week to take care of the green outside of your portfolios as well as inside.