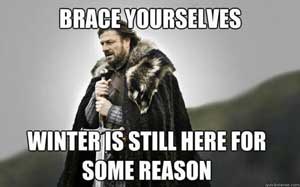 As March comes to a close, winter still seem reluctant to leave so many Canadians. Even so, spring is in the air and it is bringing with it some surprises from online brokerages which will hopefully leave DIY investors with more green in their accounts.

As part of their news release, Questrade appears to be looking to hear about “what Canadians believe in” via social media channels. Interestingly, neither the Twitter chatter nor their Facebook page seemed to ask the questions directly to their respective followings.

What was also interesting to note was the rare show of finance collegiality that Questrade received from CIBC (a sponsor of the Canada’s Best Managed Companies program and parent to rival brokerage CIBC Investor’s Edge) via CIBC’s twitter feed.

Investor Education Back on the Map

It appears that investor education is literally being put back on the map for a couple of discount brokerages this spring.

Larry Berman’s speaking tour (co-sponsored by Scotia iTrade) continues to wind its way through stops across Canada for April and May.

In addition, Desjardins Online Brokerage (aka Disnat) is also launching a Stockscores tour similar to their “SCATE” tour which ran last year. This new Stockscores tour appears to be focused online as well as out in Western Canada with events planned for Calgary and the Lower Mainland of BC.

As part of this tour, there will be a promo entitled the “Hat Trick” promo because it offers those who sign up for a Disnat Direct account with a deposit of at least $10,000. For more details on the offer, check out our discount brokerage deals section.

Deals Are Springing Up

Spring is synonymous with renewal and also with new life. For Canadian online brokerages, the decision to renew, release new deals or let deals expire is an important question heading into April.

There are 8 discount brokerage promotions or offers that were set to expire at the end of March and whether some or all of these change will be interesting – especially given the announced offers recently by TD Direct Investing as well as the deal launched by Desjardins Online Brokerage.

Of those offers poised to expire, only Desjardins Online Brokerage has extended their long running $300 commission credit offer out to August 29, 2014. It will be interesting to see what some of the major bank-owned players as well as the independent online brokerages have planned in response.

This past week’s forum activity was very interesting as there were a number of really interesting conversations about issues many self-directed investors follow. We’ve selected three topics that seemed to attract and deserve extra attention.

Investors in two different forums, the Financial Wisdom Forum and Canadian Money Forum, were abuzz at the news that one of the largest ETF providers within Canada (BlackRock iShares), was dropping their management fees on a number of ETFs.  Given the popularity of ETFs amongst Canadian investors for their low management expense fees, the news ignited all kinds of interesting angles on what this means for investors.

What happens exactly when going from one discount brokerage to another isn’t exactly clear to most folks. For those who have lived through a switch, the experiences appear to range from seamless to nightmarish. In the following post on Red Flag Deals’ investing forum, there are some interesting comments on making the switch from TD Direct Investing over to Questrade specifically and on changing brokerages in general.

Strategies involving dividend payments are popular with many investors. Outside of registered accounts, however, dividend seeking investors have to be aware of foreign investment rules and taxes that can apply to dividends originating from stocks outside of Canada. A really interesting example of the devil in the details was brought to light from this Red Flag Deals thread about Interactive Brokers. For those considering US stock dividend investing strategies with this brokerage, this is a must read.

That does it for this week. If things look a little darker this weekend, it’s because from 8:30-9:30 PM on March 29th cities all over the world will be celebrating Earth Hour in support of climate change awareness. Learn more about the #MomentOfDarkness here.

For the traders out there, light some actual candles to show support (not resistance!).