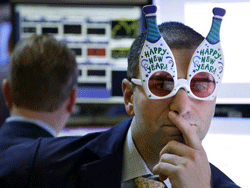 Amongst Canadian discount brokerages, it was supposed to be a quiet ride into the end of 2013. Alas, it was not to be. With a Boxing Day promotion launched by one of Canada’s discount brokerages this past week, the competition for Canadian investors officially hit a new high.  This bodes well for self-directed investors going into 2014 as both pricing and services can be expected to improve from discount brokerages looking to gain an edge on one another.   In the final (and shortened) weekly roundup of 2013, we’ll take a look at this latest disruptive deal as well as some of the interesting chatter from investors around the forums and social media.

Questrade Throws a Jab by Offering up a Boxing Day Promotion

Discount brokerages and the holiday season have historically been a poor mix.  Questrade, however, seems to have defied the unofficial tradition amongst discount brokerages to ‘take it easy’ by offering up a Boxing Day promotion.   Specifically, Questrade announced on Boxing Day they are offering up 25 commission-free trades to new accounts depositing at least $25,000.  Moreover those 25 trades are good for all of 2014.  This deal takes aim at a similar offer from RBC Direct Investing, who for a short while, claimed that they were the only discount brokerage offering commission-free trades that lasted a year.  Click here to learn more about the Questrade Boxing Day promotion.

While a lot of folks were out comparison shopping the latest TVs and tech toys this past week a handful of folks also were shopping around for discount brokerages.  This week, there is a post that pitted broker vs broker that was of particular interest as well as a lesson one investor got away with learning on the cheap.

Up first was this post on Canadian Money Forum which was a lively debate on the strengths and limitations of a couple of bank owned discount brokerages.

Many active traders have at least one bad ‘fat finger’ trade story and can relate to this post from the Red Flag Deals forum.  Although this user managed to get out unscathed, the lesson is an important one for traders to take heed of.

That does it for the discount brokerage weekly roundups for 2013.  Have a safe and happy New Year’s and here’s hoping 2014 is a great year in the markets!