While storms were raging across stock markets this past week, it was definitely calmer waters in terms of discount brokerage news and chatter.  In this week’s roundup, we look at the actions that landed another Canadian discount broker in the IIROC penalty box, a report by TD on Canadian investors as well as a review of the chatter on stock forums about brokerages and some useful cautionary investing tales. Finally, we take a quick look at the results from the twelfth edition of  the U.S. Self-Directed Investor Satisfaction Survey results from J.D. Power released earlier this week.

Scotia Capital gets called for an offside

Over the past several weeks, it seems that that Investment Industry Regulatory Organization of Canada (IIROC) has been handing out a series of penalties to Canadian discount brokerages. Joining the likes of Questrade and Interactive Brokers, the decision against Scotia Capital Inc (the parent of Scotia iTrade) was based on activity between 2009 and 2011, shortly after it had acquired E*Trade in 2008.

Scotia Capital was hit with a $150,000 fine for failing to have policies and procedures in place that could detect potential wash trades and high closing prices.  To read more about the settlement, check out the IIROC press release or a great write-up about it in the Globe and Mail.

TD Bank Group released results from a recently commissioned a survey of Canadian investors. The survey asked just over 1000 Canadian investors about their thoughts and perspectives on the investing climate in the next 12 months.  Of those surveyed, 41% felt that their personal portfolios would improve even in the face of mild Canadian and US economic recoveries and a poor global economic outlook.    This suggests that investors surveyed might be more interested in looking closer to home for investing ideas rather than looking abroad. 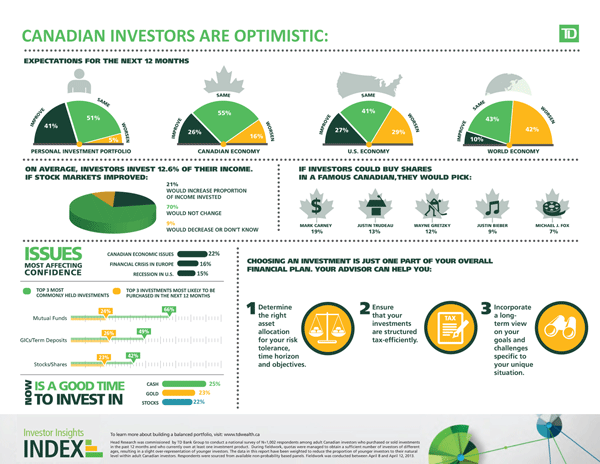 Another interesting finding from the survey is a classic illustration of behavioural finance in action.  Given the run up in the markets experienced for the first half of this year, the rising prices seemed to have also lifted the outlook of investors. Paradoxically, investors are constantly told or reminded that past performance doesn’t guarantee future results, yet it is interesting to see how the past does, in fact, shape investor perceptions.   As described in their press release, those investors surveyed who experienced a loss were more prone to being pessimistic about the future than those investors who experienced a gain.