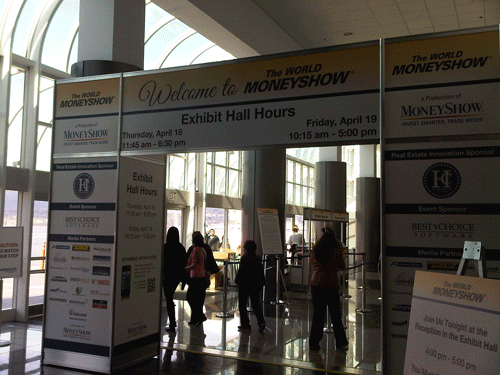 This year’s Vancouver World MoneyShow turned out to be a little different than most others. The exhibiting space felt a bit smaller than usual, the lineups took a bit longer and the schedule a bit less punctual.  As it turned out, this year’s MoneyShow would be the one in which this franchise would announce its Canadian retirement.

A small (26) and eclectic mix of companies, organizations and services exhibited this year ranging from multibillion dollar energy giant Royal Dutch Shell to consultants offering grant funding tips.  By far the most popular booth was the ‘crack the safe’ promotion held by MoneyShow which offered attendees the chance to punch in a code on a safe for a chance to win the $50,000 it contained.   There was also the usual assortment of promotional items and conference swag. Aside from some interesting pens and rubber ducks, nothing really stood out this year as being very cool conference loot.

Surprisingly, there were three discount brokerages in attendance and one notable absence. TD Direct Investing, National Bank Direct Brokerage and Interactive Brokers all attended the conference this year, however a regular at these conferences, Disnat, did not.  The discount brokerage’s booths varied in their ‘bells and whistles’ and giveaway items. TD Direct Investing’s booth was located in the prime real-estate – right at the entrance to the conference. They had their platforms on display as well as an army of staff to handle questions.  In contrast, Interactive Brokers took a no-frills approach with a lone rep, some brochures and a laptop. National Bank Direct Brokerage was offering their standard ‘hand sanitizer’ (a practical piece of conference gear after all that hand-shaking) as well as a special deal on trading commissions for new account sign ups (the details of which we’ll be posting in our deals section here).

One of the brighter spots of the conference was the assortment of interesting speakers discussing everything from market cycles and seasonality to exploration opportunities to personal finance and everything in between.

Bruce Sellery, personal finance author and owner of Moolala, gave an energetic and thought-provoking series of tips to help Canadians better approach their own financial management.  Other interesting speakers, such as Peter Hodson (of Canadian MoneySaver and 5i Research) gave investors some interesting food for thought about the mutual fund industry as well as important signs to look for when assessing investing opportunities. Most notable among those tips: “pull the weeds and water the flowers” when it comes to managing your portfolio’s winners and losers.  Marin Katsua of Casey Research also shared his dour forecast of the next few months in the mining and exploration space as well as his fascinating case for the energy market potential in Europe.

Overall, participants, speakers and exhibitors seemed to characterize Vancouver’s MoneyShow as a bit slower and smaller than usual. The MoneyShow’s formula of speakers, exhibitors and giveaways nonetheless provided something unique to attendees. Hopefully the Toronto show can be a chance for the Financial Forums to provide Canadian self-directed investors with a glimpse of greater things to come.