Despite what most people, Garfield included, seem to think about Mondays, the good news is that this week isn’t last week. With historic job-loss data being reported, the good news is that hopefully the worst bad news economically is now behind us. Surprisingly, trusting the numbers is now a theme appropriate to the news and to the latest developments among online brokerages.

In this edition of the Roundup we dive into an interesting tale of how a trade gone bad exposes deep vulnerabilities and risks for DIY investors to consider. Next, we take a look at another big online brokerage releasing a very popular feature. As always, we’ve got a selection of comments from investors on Twitter and in the forums.

Online brokerages play an interesting role in the capital markets ecosystem. They are, by some measure, the gatekeepers to individual investors being able to directly access opportunities in securities marketplaces.

In “normal” times the system tends to work, albeit with the occasional hiccup. When there are surges in demand, as DIY investors have witnessed this year and in prior years at many Canadian discount brokers, things tend to get less reliable. To correct some of this instability, brokerages have either resorted to taking their trading systems offline (or the systems themselves are being forced offline) or instituting some rather unusual moves, like Wealthsimple Trade forcing clients to wait “their turn” to be able to trade once they’ve opened and funded a new account.

As awful as these situations have been for online traders, one of the perils that didn’t really ever seem to be in the minds of traders is whether or not the information they were watching – specifically data about price – was accurate. It was this specific issue, however, that was apparently behind the spectacular loss that Interactive Brokers had to incur when one of its Canadian clients managed to turn a $77,000 gain into a $9 million dollar loss as the price of oil futures contracts turned negative in April.

The story is a must read for any DIY investor who trades on margin and, in particular, with any kind of leverage. And, it will almost certainly become the stuff of active-trader folklore. That said, it shouldn’t only be DIY investors who read the story – Canadian discount brokerages should take heed as well.

For starters, it should prompt a review of code and technology systems to be able to accommodate what might be unthinkable conditions in the market. Nobody at Interactive Brokers had configured their system to work with negative prices in the oil contract. For some context, Interactive Brokers is arguably the best of breed when it comes to technology and automation among online brokerages in North America. It does raise an important question: if such a technically capable brokerage can “miss” things, what do less capable systems currently have configured in their code?

To their credit, Interactive Brokers is owning up to it and will be reimbursing customers who were locked into long positions when prices had moved beneath zero. This is (currently) forecasted to cost Interactive Brokers about USD $110 million. While they are taking the initiative to process “refunds,” they are certainly not happy about it. Founder and retired CEO Thomas Peterffy did raise an important question: who, exactly, should be held responsible for individual investors – especially smaller investors – being given access to securities like the oil contracts in which liquidity becomes drastically reduced as contracts head to expiry?

Another important set of details to emerge from this story is the fact that the age of the trader who incurred this loss was 30 years old. To put a finer point on it, a millennial investor managed to get himself into an almost unimaginable position. Similarly, the other trader referenced in the story was someone trading on behalf of a couple of friends. While both of these details might seem trivial, it does characterize what happens when less sophisticated traders are given access to complex trading products. Even with the risk disclosures in place, the stampede of novice or newer investors to the stock market means there are many more stories like this that have either already happened or are waiting to emerge from another yet-to-be-imagined scenario. Younger or more aggressive traders can get into serious trouble, so the challenge to online brokerages is to find a way to have safety mechanisms in place – no small feat.

COVID-19 has had far-reaching effects on the economy and on society as a whole. For DIY investors, however, the economic consequences have brought into focus the vulnerability of online brokerage systems as well as the systems they interface with. It is surreal to think that even the data streaming in real time might not be accurate, but that is what can happen.

For Canadian DIY investors, it will be difficult to build trust in the technology and systems related to online trading without a transparent record of system stability. Wealthsimple Trade, for all of its recent hiccups, puts their system uptime and incident history out there for the world (and investors) to see. As much as society is focused on testing as a path forward to returning to normal, it seems that Canadian online brokerages should be investing in testing their platforms and systems too.

A Slice of Dice: Schwab Offers Up Fractional Share Trading

Some of the most popular names in the stock market are also among the hardest to access. Names like Amazon, Apple, or Alphabet are more than just stocks that begin with the letter A, they’re also stocks that cost in the hundreds or thousands of dollars each per share. For most beginner or younger investors, this presents a hurdle to participating in stock trading by using the approach of investing in things you understand. 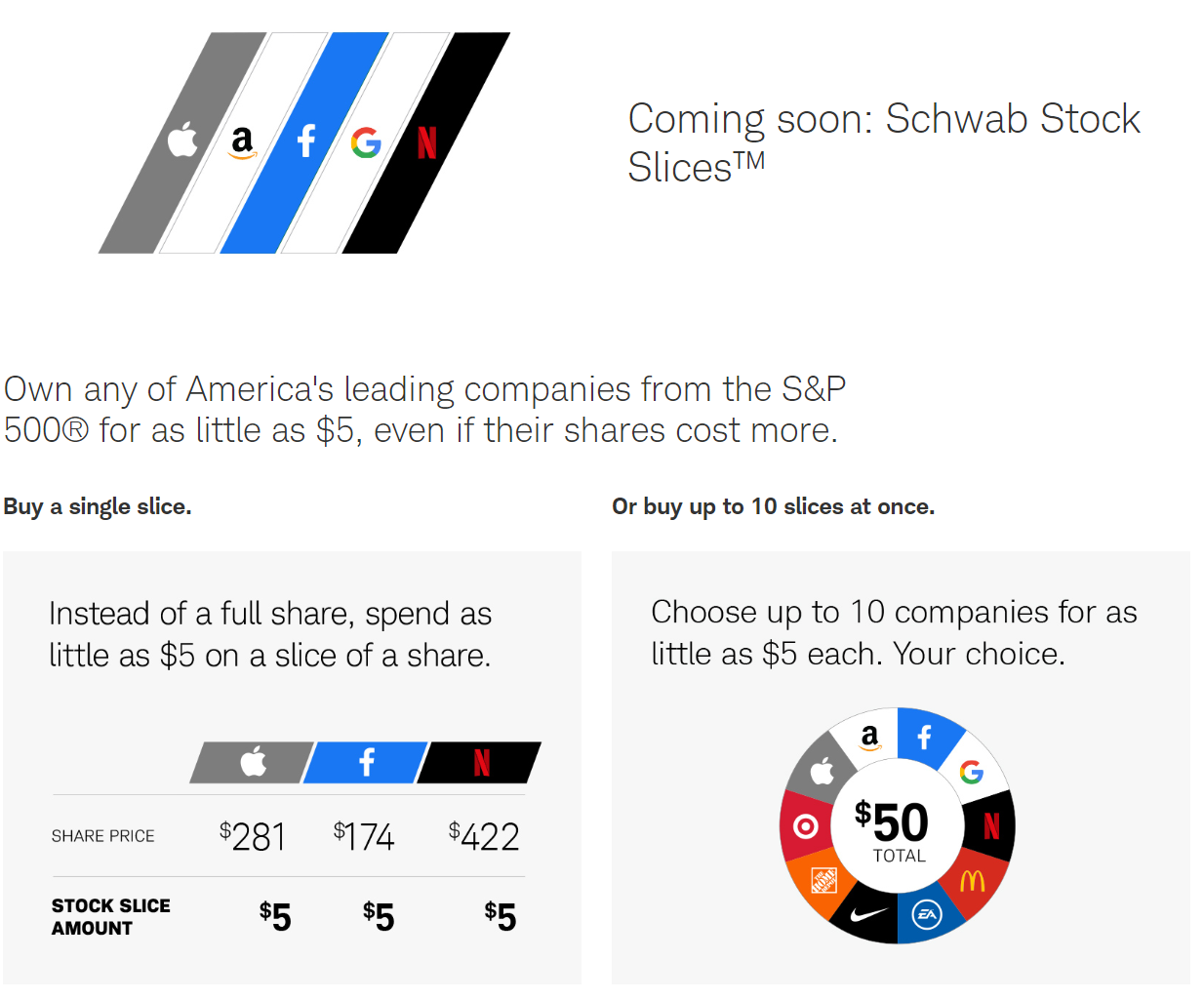 Schwab joins Interactive Brokers, Fidelity, and (eventually) Robinhood in launching a fractional share trading programs in the US, a feature that is picking up significant momentum with users online. With the new program from Schwab, investors can purchase fractional shares with as little as $5 and up to a maximum of $10,000.

With so many online brokerages chasing the elusive “younger” demographic of investor, the fractional share trading program lowers the barrier to participating – something that younger Canadian DIY investors on social media and the forums often bump into. Conversations about diversification usually result in DIY investors turning to ETFs; however, with fractional shares, it is possible to achieve diversified status even with modest savings.

If ever there was a time to offer and advertise this feature, it seems like it would be now. Younger investors are coming into the market at a historic pace. Additionally, as with many features that get launched in the US, the natural question is whether or not this kind of feature can be deployed by Canadian discount brokerages.

Despite the diversity of tactics to reach a younger investor – from social media to digital advertising – online brokerages in Canada haven’t, in large part, lowered the barrier to participating in some of the most exciting names in the stock market today. That, it seems, could prompt another wave of interest and engagement with investing, since it makes trading financially accessible to active and passive investors alike.

Honey, I Inflated the Market

A curious Redditor poses the question of whether federal spending and CERB might cause inflation, and a lively discussion on various schools of economic thought on the matter ensues in this post.

That’s a wrap on another historic week of market activity. Unemployment rates and the general shock to the economy might be making headlines, but stock markets continued their ascent, nonetheless. And  if FOMO wasn’t kicking in already, there’s clearly a case of market envy at play as certain stocks put in new highs and push into record territory (ahem, Shopify). So, if we needed yet another reminder that we don’t live in normal times right now, the push higher by stock markets even despite the direst economic news will almost certainly instigate other investors to join in the fray.