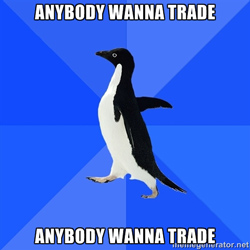 Heading into the last weekend of June, it looks like trading action is everywhere. NHL’ers & NBA’ers are trading players, politicians are trading blows and it even looks like Vancouver and Toronto have traded weather. For all the trading going on everywhere, Canadian discount brokerages are hoping DIY investors feel inspired to trade during the typically sluggish summer season.

This week’s roundup will be an aptly attired short edition. On the grill will be a look at one brokerage’s ongoing ‘quest’ to beat other discount brokerages at the deals & promotions game; a quick look at some headline making brokerages and trading technology from the US; some of the interesting social media observations, and finally, what DIY investors are talking about in the investor forums.

Whether it was in anticipation of all the deals set to expire at the end of June or if it was timed just around Canada Day, Questrade continued to keep the deal produce fresh by rolling out their latest ‘Canada Day’ themed promotion. In their latest promo, Questrade is willing to provide 25 commission free trades which are good for use for the rest of the year or about six months for individuals who deposit at least $25,000.

The clever copywriters in the Questrade marketing department have pitched the offer as ‘trade free for the rest of the year’. And, while it is definitely not the first time this hook has been used, it is also a good example of a ‘made you look’ message. Questrade is not alone in this department as other discount brokerages try to grab the headlines with large numbers of free trades or cash back offers for very large deposit amounts. Remember, always check the fine print.

With eight deals set to expire at the end of June, it should be interesting to see which, if any, promotions will be extended and whether other discount brokerages will be looking to make a summer splash with an offer in July. Stay tuned.

As an informal scientific poll, the next time you happen to be walking down the street – have a look around at how many folks are holding onto or even looking down at a screen. (If you happen to be reading this while on one of those screens, don’t forget to look up and around every once in a while!) Chances are pretty good that most younger folks are attached to some kind of smart device.For the more tech-savvy or tech-addicted traders and investors, the new ‘wearable’ technologies that are emerging will add yet another layer to how investors scan, research, monitor and buy/sell securities.

In this article from thestreet.com, there is an interesting breakdown of the possible impact of watch-based trading platforms on investors as well as some interesting data on how investors are using the different devices now available to them. While most Canadian brokerages have yet to deploy a dedicated Apple Watch trading app, there are some interesting lessons to learn from the early winners and losers in the race going on in the US.

Endeavouring to become a truly global discount brokerage is an ambitious undertaking. Sometimes, however, things can go slightly off the rails as they did for Interactive Brokers in Australia. This past week Australia’s securities regulator halted Interactive Brokers from trading currencies because they did not have the appropriate licensing to do so. While not a large part of their overall business, going offline in any market is no fun for anyone involved and a lesson to DIY investors to do some extra legwork to ensure their provider isn’t on anyone’s naughty list – least of all the securities regulator.

This week on Twitter, the chatter from DIY investors about discount brokerages highlighted some of the hiccups that mobile trading technology can face. Sometimes it’s just one person, other times it’s a much bigger issue. It looks like Questrade had a minor issue with their mobile trading however they weren’t the only brokerage to be bit by a technology bug. A user on Scotia iTrade’s app also found a bit of glitch with accuracy of quotes. Interestingly this week there were a few discussions on price – with CIBC Investor’s Edge getting a nod as well as the independent brokerages Questrade and Virtual Brokers. Click below to read more.

Advisors Getting the Boot

With the upcoming changes to the way in which financial advisors will have to start disclosing their fees to clients, there were a couple of interesting posts that might be ‘canaries in the coal mine’ for many advisory services. In this post, from Canadian Money Forum, one user was curious to know whether going it alone on CIBC Investor’s Edge was worthwhile and in this post, from reddit’s Personal Finance Canada section there was a detailed explanation behind the pros/cons of going it alone.

The old adage of being greedy when others are fearful and fearful when others are greedy comes to mind when listening to the hype around Canadian real estate. While its not normally something we cover here, the conversation has shifted to how some investors would look to short Canadian real estate in the same way that some folks did in the US prior to their housing bubble bursting. Check out this interesting post on reddit’s Personal Finance Canada section for more.

That’s a wrap for this edition of the roundup. For the traders out there, remember that Canadian markets will be closed on July 1st (Wednesday) in observance of Canada day and that US markets will be closed on July 3rd (Friday) in observance of Independence Day. In the words of the new (and well played marketing ploy) Eh Moji’s: