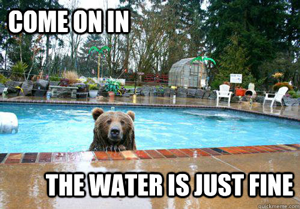 As much as investors and traders alike are beholden to the hard right edge of a chart, there’s something precarious about staring back at a trend line breaking behind you. Despite the possible gloom (for the longs) in stock markets that accompanies a break of an upward trend, Canadian discount brokerages may be experiencing the beginning of a series of new trends. Of course, the funny thing about trends is that it’s often tricky to know just when you’re in or out of one.

In this week’s roundup we take a look at a number of ‘trendy’ stories including a feature upgrade from one of the bank-owned online brokerages, the positive boost that US brokerages are getting, and an interesting growth story investors may want to put on their radar. Of course we’ll cap this week’s roundup with a couple of interesting threads from the Canadian investing forums.

A Platform for Change

Two points a trend does not make – or does it? A developing story we’ve been tracking has been the interest Canadian online brokerages have been paying to trading platforms and user experience. As we reported in last week’s roundup, the announcement by Sterling Trader wanting to expand into Canada is probably just the tip of a platform iceberg floating towards Canadian self-directed investors.

This past week, Scotia iTrade announced upgrades to its mobile platform on Android and Blackberry as well as feature enhancements for its iPad app.

According to their announcement, the new features for the Android and Blackberry apps include fundamental data and analyst ratings, level 2 quotes for Canadian securities upon order entry as well as enhancements to dividend plan-related products.

With the dust on the pricing war having settled (at least for the moment), it’ll be interesting to see which areas brokerages pick to differentiate themselves on. For now it seems like platforms are a good bet as we’re aware of at least two other major online brokerages that have significant platform upgrades coming in the near future. Stay tuned.

US Discount Brokerages Catch a Bid

A couple of interesting announcements came from the US online brokerages E*trade, TD Ameritrade and Schwab this past week.

What stood out amongst the mixed news of July trading performance and earnings numbers from the US-based brokerages was the initiating of buy ratings on giants Schwab and TD Ameritrade by Deutsche Bank.

The comments by analyst Brian Bedell point to a thesis of strength based on the combination of diversified revenue streams and potential market volatility that may accompany interest rate hikes.

Reading between the lines, winning the brokerage game (at least in the near term) seems to be about offering more than just trade execution – something that non-bank owned brokerages may have to think through carefully here in Canada.

When most DIY investors think of the stock market in Canada, they immediately think of the TSX and perhaps the TSX-Venture. Over the past 12 years, however, there has been another Canadian exchange – the Canadian Securities Exchange (CSE) – that has been steadily growing.

While awareness and coverage of the CSE has been muted, 2014 looks to be a breakout year. The CSE is experiencing its best year yet in terms of new listings and trading volume. And, where companies go, investors both big and small have followed.

The latest figures from July (as well as from June) are worth looking at as they point towards a marketplace that is gradually working towards a rally.

Many of the newest additions to the CSE are junior companies. When the recent activities at the CSE are juxtaposed with TSX-V performance, however, the picture of a junior market undergoing some kind of  longer term consolidation seems apparent. (For another even more interesting spin on what’s going on in the junior space, the latest Tickerscores piece on Junior Gold miners is worth a read)

Registered Accounts on the Spot

Switching brokerages is not usually high on the list of fun experiences. An interesting post from the Canadian Money Forum this past week shed light on something that many investors may find even less fun: going from a ‘monocurrency’ RRSP brokerage account to a dual currency RRSP brokerage account. For the spreadsheet enthusiasts and performance sticklers, this is definitely worth a read for the thoughts on adjusted cost base tracking.

Keep it in the Family

In this post from the Reddit Personal Finance Canada thread, there was an interesting discussion that arose over whether money could be ‘given’ to the thread author’s parents to invest. Whenever money changes hands there are usually tax implications or considerations to be aware of that the community helped by sharing.

That does it for this week’s roundup. On a solemn note, this past week the world lost one of the most brilliant actors and comedians of our time. While he will be missed, Robin Williams’ greatest works and the exuberance with which he lived his life will always serve to inspire us. Here’s a link to the soundtrack to one of his greatest movies – Good Morning Vietnam.