The beginning of March has seen a frenzied week across international markets and here at home in the discount brokerage space.  While the world is watching to see what unfolds between the Ukraine and Russia, markets paused only briefly on the news but then continued to push higher into new all-time highs (for the S&P 500) illustrating once again that markets and headlines don’t always agree on the state of the world. Sorry bears.

Closer to home, many discount brokerages were busy attending to the last minute RSP contributors who managed to get in ahead of the March 3rd deadline.  Now that RSP season is over, brokerages are taking a slight pause before trying to land the deposits from tax returns into new trading accounts.

In this week’s roundup, we cover yet another major online brokerage that has dropped their standard commission pricing, we report trading activity from a an independent online brokerage, news from a major investor conference that took place in Toronto and a couple of interesting threads from the Canadian investor forums.

It seems that there has hardly been a week that has gone by that hasn’t seen an announcement by a major online brokerage lowering their standard commission fees.

This past week, Desjardins Online Brokerage (aka Disnat) became the latest discount brokerage to do so by lowering their standard equity commission trading rates on their Disnat Classic platform from $29+ to $9.95.  While the Disnat Classic rates have changed, Disnat Direct will still have the same standard pricing structure for equity trading ($19.95+).

Also lowered is the cost of options trading via Disnat Classic – it is now a $1.25 per contract with a minimum charge of $8.75 per trade.

As with the bank-owned brokerages, there may be an administrative (aka inactivity or minimum account balance) fee that is charged depending on the trading level or balance or whether a registered account is held.

For Disnat Classic, an administrative fee of $25 per quarter can be waived for account holders whose portfolio balances are greater than $15,000, or if they make 2 or more trades are within a year or if they also hold a registered account.

The passage into March means that trading activity statistics from Interactive Brokers were made available for the month of February.  According to the latest figures, trading was up 19% on a year over year basis compared to February 2013, however on a month-over-month basis the Daily Average Revenue Trades (DARTs) were about the same.  DARTs for February 2014 totaled 581,000.  The number of client accounts at Interactive Brokers continued higher with 247,300 accounts representing a 2% growth over the prior month and a 19% increase over the same point last year.

One of the world’s largest mining conventions took place this past week in Toronto.  The Prospectors & Developers Association of Canada (PDAC) held their annual convention and, despite the downturn in commodity markets, there were enormous crowds of investors (retail and institutional) as well as industry, government and media in attendance.

The size and scale of the convention reflects just how important it has become as a place for the mining industry to converge and for deals to get done.  Prime Minister Stephen Harper spoke at the event as well as other key political representatives.

One thing that stood out was the sheer number of attendees looking to generate business – a great example of the fact that prospecting underground also requires a lot of prospecting above ground too. 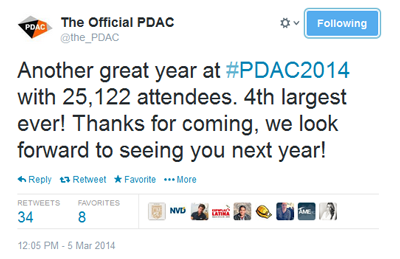 Commission-Free ETFs Back on the Radar

With pricing at major bank-owned online brokerages dropping into line with one another, many of these banks as well as other brokerages are going to be trying harder to highlight features and benefits apart from pricing that make them stand out from their peers.

One of the products offerings that will likely get attention as a result of this are commission-free ETFs.  A recent article from the Globe and Mail this past week reiterates much of what is covered in our special series comparing commission-free ETFs at online brokerages – namely that while paying low or now commissions is nice, ultimately you have to look at what exactly you are buying and whether that is the right fit for your portfolio needs.

Recently, Rob Carrick of the Globe and Mail has also put together an ‘ETF Buyer’s Guide’ available via the following links:

A post from this past week’s forum scan serves as a great example of the importance of knowing what it is that you are buying when looking at either ETFs or low-cost mutual funds.  Click here to read what the Canadian Money Forum users had to say to one RBC Direct Investing client who’s decided to go it alone.

Margin and margin accounts are typically used for trading stocks or options, however there are cases when they can be used for more.  This post from Canadian Money Forum shows how one user is thinking outside of the box when using margin, however the message from the community is: if (or when) things go down in value, beware of the dreaded margin call.

That does it for this week’s roundup.  In case you missed it, here’s the link to the March Madness edition of our monthly newsletter.  Have a great weekend and don’t forget, clocks spring forward by an hour!