Canadian discount brokerages are in the midst of a price war.  The newer entrants to the Canadian discount brokerage market, such as Questrade and Virtual Brokers, have driven prices for equity trade commissions to below the $1 per trade mark.  With Questrade’s recently announced $0.95 commission per trade offering, they now rival Virtual Brokers’ $0.99 commission rate launched at the end of 2011.

While the sub $1 equity commission pricing sounds alluring, especially in a landscape where standard commission rates at large bank-owned discount brokerages can still exceed $29 per trade, there are important details that consumers need to be vigilant about to truly understand whether the low advertised prices are a good deal or simply just clever marketing.

To determine which plan was actually a better deal, we undertook a comprehensive study of Questrade’s and Virtual Brokers’  lowest equity commission pricing packages, looking at both the fixed and variable costs of trading each plan.

In the first of a special series of posts based on this research, we provide analysis of the lowest cost pricing between Questrade and Virtual Brokers, and offer some of the important lessons and tips from our research.

For those interested in reading the full report, it is available for purchase here.

While advertising and marketing efforts are being deployed full force to let consumers know about the sub $1 equity trades at Questrade and Virtual Brokers, there is a strange silence when it comes to talking about total cost of each trading plan.

Providing such low cost trading certainly appeals to one of the biggest decision factors consumers use when choosing a discount brokerage: price.  But commission price, the feature most widely advertised, is only a small part of the cost story consumers need to consider when looking at Questrade’s Advantage plan or Virtual Brokers “The 99” plan.

One of the biggest lessons our research into both these offers showed us was that consumers need to be aware of the difference between equity trade commissions and total cost of trading.  Fees such as data subscription costs, streaming data fees, Electronic Communication Network (ECN) or exchange fees as well as commission fees factor into the total cost.  In our model we did not include the cost of SEC fees, taxes or margin interest. With so many different types of costs to consider, a good strategy to make sense of them is to compare each plan in terms of their fixed or variable costs. 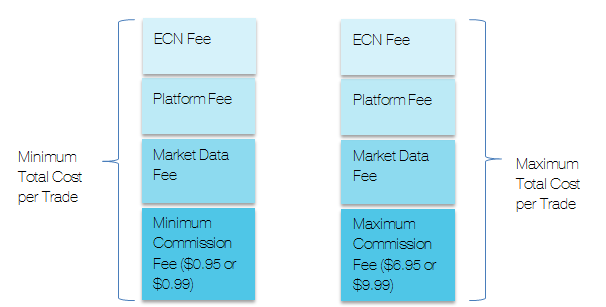 A major fixed cost to consider when comparing either plan is the monthly data charge.  Variable costs, such as commission fees are common to both Questrade and Virtual Brokers, however other variable costs such as ECN or exchange fees apply only in certain cases to Questrade.  An interesting feature of both of these plans is that they offer rebates based on trading activity levels.  In the case of Questrade, they offer rebates in different tiers of activity, with the lowest ($19.95) being offered to those who trade between 10 and 99 trades per month, and the highest ($89.95) offered to those who trade 100 times or more in a month.  Virtual Brokers, by comparison offers a $60.75 rebate for clients who trade 150 or more times in a quarter (or 50 times per month for three months on average).

In our analysis, we looked at the main fixed and variable costs as well as rebates to figure out, on a total cost of ownership basis, which plan actually came out ahead.  While there was no clear ‘winner’ that in and of itself was a very interesting finding because it shows that despite having lower equity commissions, Questrade’s Advantage plan was not cheaper than Virtual Brokers’ “The 99” plan under several tested scenarios.

In our next part, we cover some of the findings from the cost of data and its impact on both plans.