Every so often something comes along that turns into a phenomenon which then takes on a life of its own.  This weekend is the big launch of the first movie in the widely anticipated  Hunger Games series.  The mania for the film is already at an all-time high going into the opening weekend – everyone is talking about it on the entertainment and business news channels, movie theater tickets for shows already sold out in some major centers – yes, people sense that this is going to be something huge.  Some are already comparing it to Harry Potter or Twilight.  While most people enjoy the stories, seasoned traders and investors understand something of this magnitude spells profits.

Investors and traders alike have seen this story play out every day in the markets.  When things get emotional, there’s really no telling what people will do and more importantly what people will pay. Great traders are serial opportunists – always looking for an advantage, and therefore how to profit from a situation.  For that reason, the fervor and enthusiasm for the movie has manifested itself as an emotional move higher in the stock of the company that owns the rights to movie, a company called Lions Gate Entertainment. 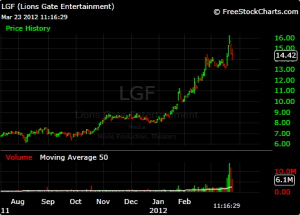 The simple lesson in this chart is that when people want something, they will pay for it. Prices in a stock chart go up because people believe that the value of a company will go up over time.  When lots of people start thinking the same thing, prices move very quickly, and that’s when things get emotional.  The fear of missing out, otherwise known as greed, is a powerful force that seasoned traders know how to recognize and exploit.

In the stock market, as in the Hunger Games, there is a simple rule for investors and traders, stay alive. To do that, you have to be calculated and cunning and ultimately you have to be willing to take money from those who are more than happy to hand it to you.