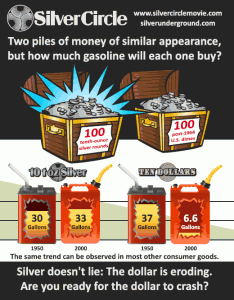 What would you do if you had a printing press that spat out as much money as you wanted at any time you asked for it? It’s a question most people can only dream of being able to answer, but for a handful of individuals in governments around the world, these machines already exist and are used in just that fashion to create currency.

For some, the idea that paper money (fiat currency) should be a store of value (i.e. that a dollar today should buy you the same amount of the same stuff 10 years from now as it does today) is only as good as the paper it is printed on.  In reality, wages have moved at one rate and prices for things at another. While it is generally accepted that prices for things can and do change, what most people hope for is that their savings will be able to work as hard for them in the future as they do today.   But what would a future look like if money didn’t end up storing the value it was supposed to? How would people and economies figure out what something is worth and how would they go about paying one another for goods and services? What if the monetary regulators became overzealous, corrupt and tyrannical? While it might not seem like the plot of your typical action-thriller, it is certainly the backdrop of the soon to be released animated feature-length film “Silver Circle” by Lineplot Productions.

The film itself is set in 2019 America, a country where the economy is in turmoil, inflation is out of control and where the monetary regulator, the US Federal Reserve, has replaced the paper money system with silver coins. In the process of trying to gain control over the economy and society, the US Federal Reserve has outlawed buying and selling of non-government issued silver coins and has also set up the Federal Reserve Department of Housing Stability to control the supply, and therefore price, of housing.  A group of rebels, however, is determined to put a stop to the tyranny by putting out their own silver coins and therefore shift the balance of power away from the Federal Reserve and into the hands of the people.

Inspired by the financial meltdown and collapse of Lehman Brothers in 2008, the film’s creator, Pasha Roberts, conceived of the idea of a story about the dangers of financiers gone wild.  We had a chance to speak to Megan Duffield of Silver Circle about the film.  According to Megan, even though the film has an “educational spine” to it and will inform audiences about fiat currencies, precious metals and the US Federal Reserve, this film is an action-thriller first and foremost.   Several of the film’s key plot lines are inspired by historical events, such as Executive Order 6102 which forced everyone in the US who had more than a small amount of gold to turn it over to the US Federal Reserve (you can read more about that here:  http://en.wikipedia.org/wiki/Executive_Order_6102).

Also, silver was chosen for the currency of the future because historically silver actually did serve as currency for many cultures and civilizations and because the prices of silver make it a little easier to relate to for most people than gold’s price.

What the film’s creators hope to do is to get audiences thinking or rethinking the idea that your money as cash is as safe as you think it is.  At the very least there is some merit to the idea that paper money (fiat currency) is vulnerable to manipulation and misuse, and that the path such misuse puts society in is not that far-fetched given what is happening to central banks around the world today.  Even though financial advisors and pundits often say past-performance doesn’t guarantee future performance, there’s also no guarantee that what’s happening now won’t play out exactly the same way.

To find out more about the movie including when it will be released, and conferences where you can speak to the creators, you can visit the website at www.silvercirclemovie.com .  You can also find out more about the project and about their opinions on monetary situation in the US at www.silverunderground.com.  If you’d like to see another interesting series of videos on understanding social security by The Silver Circle’s creator, Pasha Roberts, you can watch his “Saving Sonny” series here: http://www.imdb.com/video/wab/vi3117089305/ .